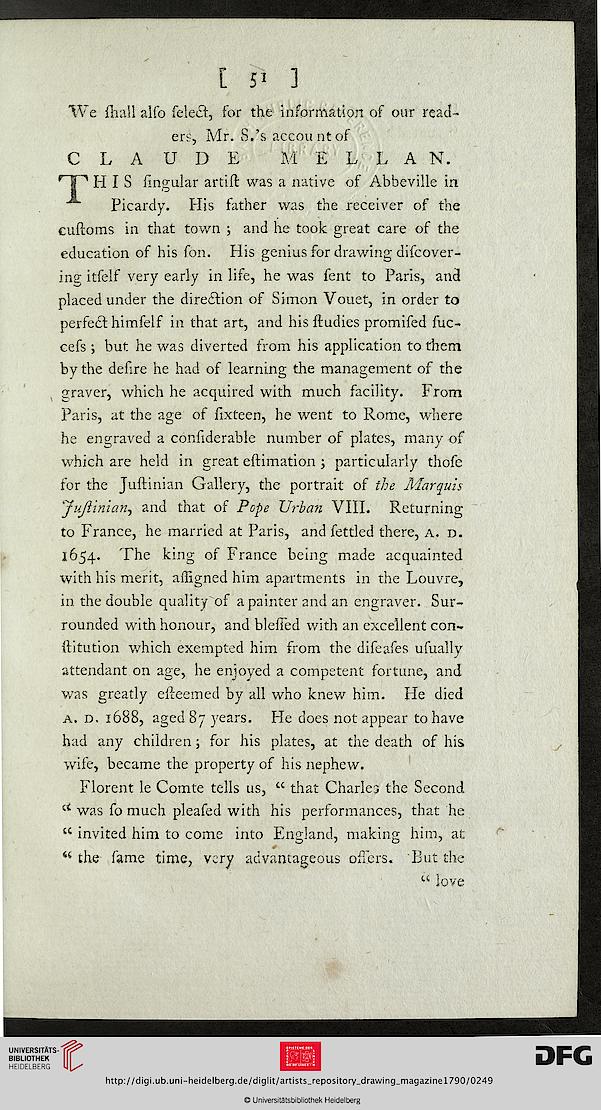 We {hall alfo felect, for the information of our read-
ers, Mr. S.'s account of

CLAUDE M £ L LAN.
rTP HIS fmgular artift was a native of Abbeville in
Picardy. His father was the receiver of the
cuiloms in that town ; and he took great care of the
education of his fon. His genius for drawing difcover-
ing itfelf very early in life, he was fent to Paris, and
placed under the direction of Simon Vouet, in order to
perfect himfelf in that art, and his ftudies promifed fuc-
eefs ; but he was diverted from his application to them
by the defire he had of learning the management of the
graver, which he acquired with much facility. From
Paris, at the age of fixteen, he went to Rome, where
he engraved a confiderable number of plates, many of
which are held in great eftimation ; particularly thofe
for the Juftinian Gallery, the portrait of the Marquis
"Jujiinlan^ and that of Pope Urban VIII. Returning
to France, he married at Paris, and fettled there, a. d.
1654. The king of France being made acquainted
with his merit, affigned him apartments in the Louvre,
in the double qualityof a painter and an engraver. Sur-
. rounded with honour, and blefTed with an excellent con-
ftitution which exempted him from the difeafes ufually
attendant on age, he enjoyed a competent fortune, and
was greatly eileemed by all who knew him. He died
a. d, 1688, aged 87 years. He does not appear to have
had any children; for his plates, at the death of his
wife, became the property of his nephew.

Florent le Comte tells us, " that Charleo the Second
u was fo much pleafed with his performances, that he
" invited him to come into England, making him, at
*( the fame time, very advantageous offers. But the