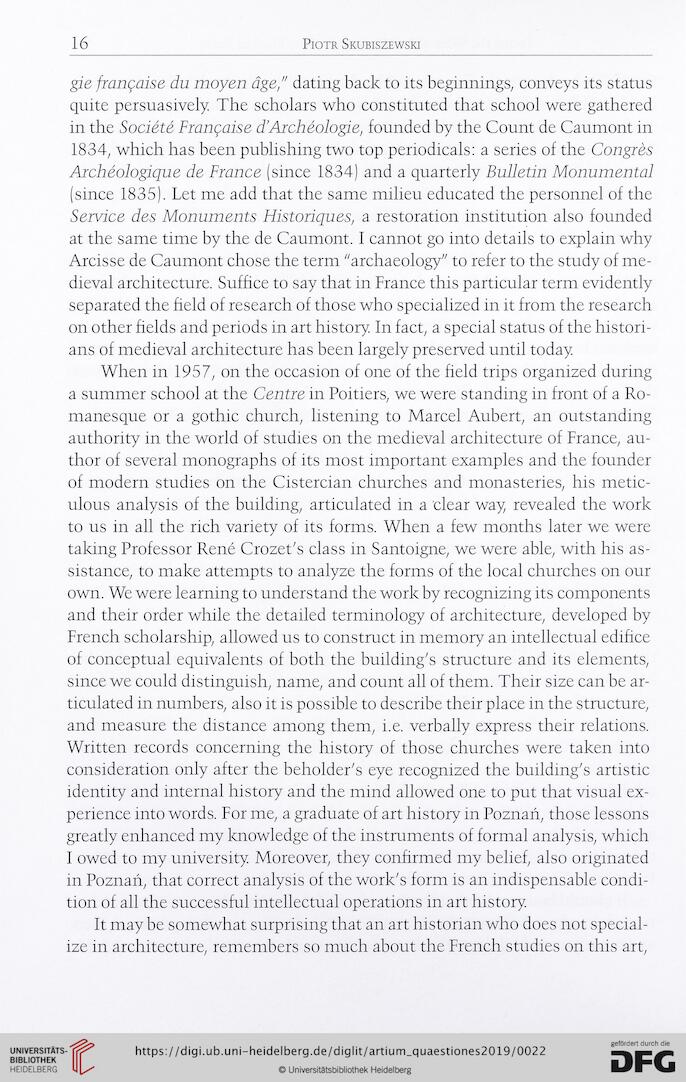 gie française du moyen âge," dating back to its beginnings, conveys its status
quite persuasively. The scholars who constituted that school were gathered
in the Société Française d’Archéologie, founded by the Count de Gaumont in
1834, which has been publishing two top periodicals: a series of the Congrès
Archéologique de France (since 1834) and a quarterly Bulletin Monumental
(since 1835). Let me add that the same milieu educated the personnel of the
Service des Monuments Historiques, a restoration institution also founded
at the same time by the de Gaumont. I cannot go into details to explain why
Arcisse de Gaumont chose the term "archaeology" to refer to the study of me-
dieval architecture. Suffice to say that in France this particular term evidently
separated the Held of research of those who specialized in it from the research
on other Helds and periods in art history In fact, a special status of the histori-
ans of medieval architecture has been largely preserved until today.
When in 1957, on the occasion of one of the field trips organized during
a summer school at the Centre in Poitiers, we were standing in front of a Ro-
manesque or a gothic church, listening to Marcel Aubert, an outstanding
authority in the world of studies on the medieval architecture of France, au-
thor of several monographs of its most important examples and the founder
of modern studies on the Cistercian churches and monasteries, his metic-
ulous analysis of the building, articulated in a clear way, revealed the work
to us in all the rich variety of its forms. When a few months later we were
talcing Professor René Crozet's class in Santoigne, we were able, with his as-
sistance, to make attempts to analyze the forms of the local churches on our
own. We were learning to understand the work by recognizing its components
and their order while the detailed terminology of architecture, developed by
French scholarship, allowed us to construct in memory an intellectual edifice
of conceptual equivalents of both the building's structure and its elements,
since we could distinguish, name, and count all of them. Their size can be ar-
ticulated in numbers, also it is possible to describe their place in the structure,
and measure the distance among them, i.e. verbally express their relations.
Written records concerning the history of those churches were taken into
consideration only after the beholder's eye recognized the building's artistic
identity and internal history and the mind allowed one to put that visual ex-
perience into words. For me, a graduate of art history in Poznań, those lessons
greatly enhanced my knowledge of the instruments of formal analysis, which
I owed to my university. Moreover, they confirmed my belief, also originated
in Poznań, that correct analysis of the work's form is an indispensable condi-
tion of all the successful intellectual operations in art history
It may be somewhat surprising that an art historian who does not special-
ize in architecture, remembers so much about the French studies on this art,