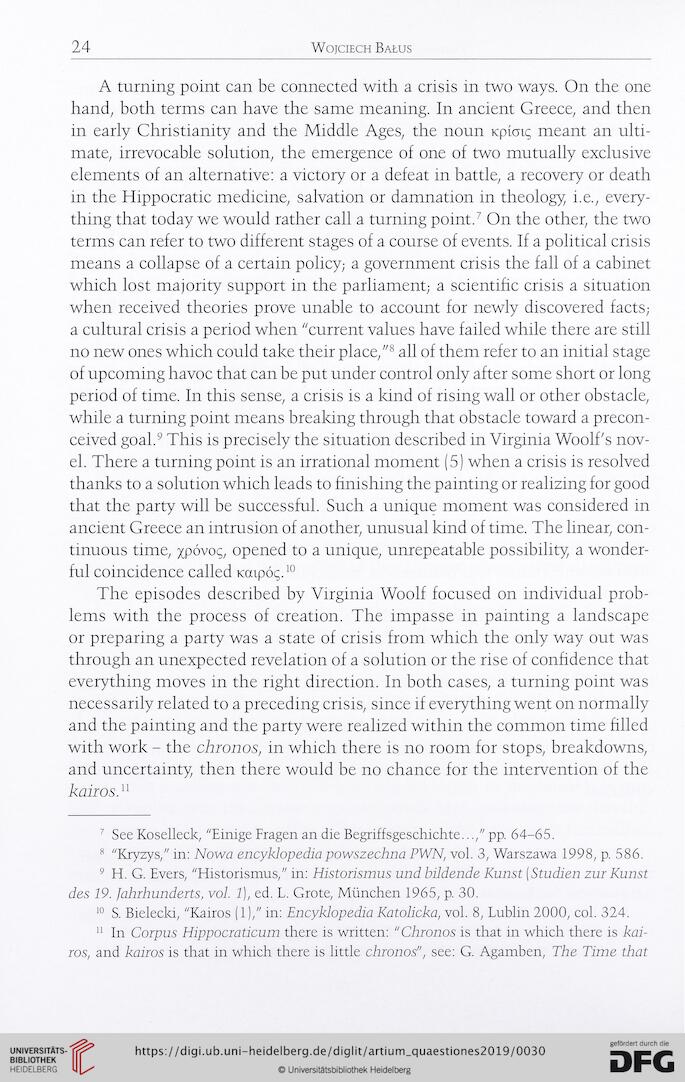 Information about OCR text
24 Wojciech Balu s
A turning point can be connected with a crisis in two ways. On the one
hand, both terms can have the same meaning. In ancient Greece, and then
in early Christianity and the Middle Ages, the noun Kpfciç meant an ulti-
mate, irrevocable solution, the emergence of one of two mutually exclusive
elements of an alternative: a victory or a defeat in battle, a recovery or death
in the Hippocratic medicine, salvation or damnation in theology i.e., every-
thing that today we would rather call a turning point.7 On the other, the two
terms can refer to two different stages of a course of events. If a political crisis
means a collapse of a certain policy; a government crisis the fall of a cabinet
which lost majority support in the parliament; a scientific crisis a situation
when received theories prove unable to account for newly discovered facts;
a cultural crisis a period when "current values have failed while there are still
no new ones which could take their place/'8 all of them refer to an initial stage
of upcoming havoc that can be put under control only after some short or long
period of time. In this sense, a crisis is a kind of rising wall or other obstacle,
while a turning point means breaking through that obstacle toward a precon-
ceived goal.9 This is precisely the situation described in Virginia Woolf's nov-
el. There a turning point is an irrational moment (5) when a crisis is resolved
thanks to a solution which leads to finishing the painting or realizing for good
that the party will be successful. Such a unique moment was considered in
ancient Greece an intrusion of another, unusual kind of time. The linear, con-
tinuous time, xpôvoç, opened to a unique, unrepeatable possibility, a wonder-
ful coincidence called Kaipóę.10
The episodes described by Virginia Woolf focused on individual prob-
lems with the process of creation. The impasse in painting a landscape
or preparing a party was a state of crisis from which the only way out was
through an unexpected revelation of a solution or the rise of confidence that
everything moves in the right direction. In both cases, a turning point was
necessarily related to a preceding crisis, since if everything went on normally
and the painting and the party were realized within the common time filled
with work - the chronos, in which there is no room for stops, breakdowns,
and uncertainty, then there would be no chance for the intervention of the
kairos.11