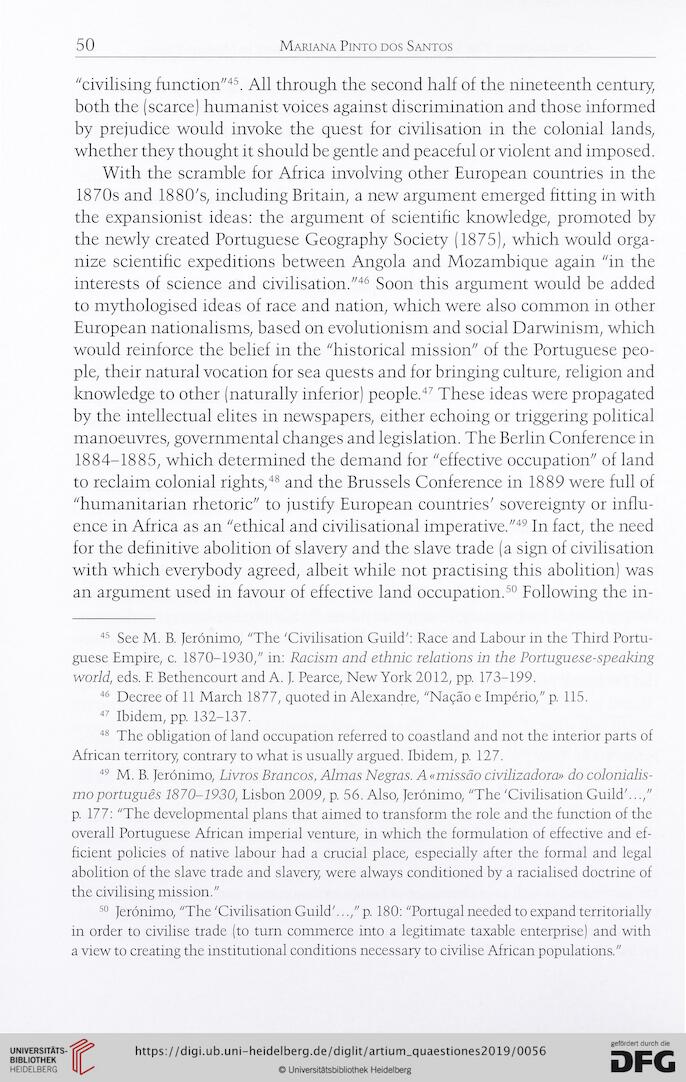 "civilising function"45. All through the second half of the nineteenth century,
both the (scarce) humanist voices against discrimination and those informed
by prejudice would invoke the quest for civilisation in the colonial lands,
whether they thought it should be gentle and peaceful or violent and imposed.
With the scramble for Africa involving other European countries in the
1870s and 1880's, including Britain, a new argument emerged fitting in with
the expansionist ideas: the argument of scientific knowledge, promoted by
the newly created Portuguese Geography Society (1875), which would orga-
nize scientific expeditions between Angola and Mozambique again "in the
interests of science and civilisation."46 Soon this argument would be added
to mythologised ideas of race and nation, which were also common in other
European nationalisms, based on evolutionism and social Darwinism, which
would reinforce the belief in the "historical mission" of the Portuguese peo-
ple, their natural vocation for sea quests and for bringing culture, religion and
knowledge to other (naturally inferior) people.47 These ideas were propagated
by the intellectual elites in newspapers, either echoing or triggering political
manoeuvres, governmental changes and legislation. The Berlin Conference in
1884-1885, which determined the demand for "effective occupation" of land
to reclaim colonial rights,48 and the Brussels Conference in 1889 were hill of
"humanitarian rhetoric" to justify European countries' sovereignty or influ-
ence in Africa as an "ethical and civilisational imperative."49 In fact, the need
for the definitive abolition of slavery and the slave trade (a sign of civilisation
with which everybody agreed, albeit while not practising this abolition) was
an argument used in favour of effective land occupation.50 Following the in-

45 See M. B. Jeronimo, "The 'Civilisation Guild': Race and Labour in the Third Portu-
guese Empire, c. 1870-1930," in: Racism and ethnic relations in the Portuguese-speaking
world, eds. E Bethencourt and A. J. Pearce, New York 2012, pp. 173—199.
46 Decree of 11 March 1877, quoted in Alexandre, "Naçâo e Impèrio," p. 115.
47 Ibidem, pp. 132-137.
48 The obligation of land occupation referred to coastland and not the interior parts of
African territory, contrary to what is usually argued. Ibidem, p. 127.
49 M. B. Jeronimo, Livros Brancos, Almas Negras. A«missâo civilizadora» do colonialis-
mo português 1870-1930, Lisbon 2009, p. 56. Also, Jeronimo, "The 'Civilisation Guild'...,"
p. 177: "The developmental plans that aimed to transform the role and the function of the
overall Portuguese African imperial venture, in which the formulation of effective and ef-
ficient policies of native labour had a crucial place, especially after the formal and legal
abolition of the slave trade and slavery were always conditioned by a racialised doctrine of
the civilising mission."
50 Jeronimo, "The 'Civilisation Guild'...," p. 180: "Portugal needed to expand territorially
in order to civilise trade (to turn commerce into a legitimate taxable enterprise) and with
a view to creating the institutional conditions necessary to civilise African populations."