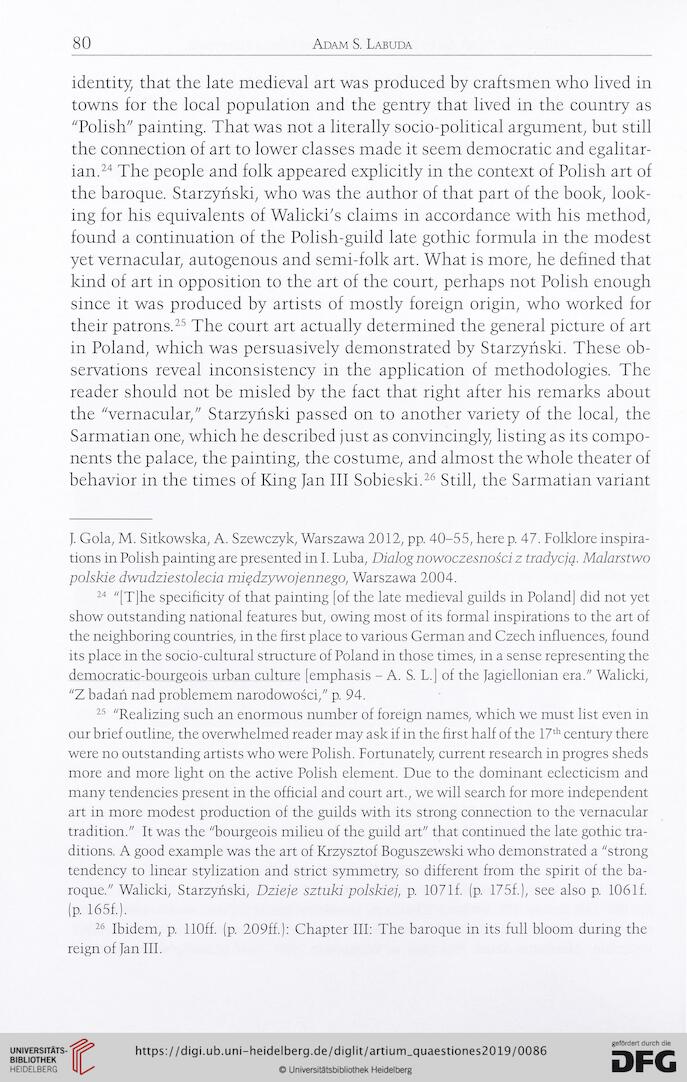 identity that the late medieval art was produced by craftsmen who lived in
towns for the local population and the gentry that lived in the country as
"Polish" painting. That was not a literally socio-political argument, but still
the connection of art to lower classes made it seem democratic and egalitar-
ian.* * * 24 The people and folk appeared explicitly in the context of Polish art of
the baroque. Starzyński, who was the author of that part of the book, look-
ing for his equivalents of Walicki's claims in accordance with his method,
found a continuation of the Polish-guild late gothic formula in the modest
yet vernacular, autogenous and semi-folk art. What is more, he defined that
kind of art in opposition to the art of the court, perhaps not Polish enough
since it was produced by artists of mostly foreign origin, who worked for
their patrons.25 The court art actually determined the general picture of art
in Poland, which was persuasively demonstrated by Starzyński. These ob-
servations reveal inconsistency in the application of methodologies. The
reader should not be misled by the fact that right after his remarks about
the "vernacular," Starzyński passed on to another variety of the local, the
Sarmatian one, which he described just as convincingly listing as its compo-
nents the palace, the painting, the costume, and almost the whole theater of
behavior in the times of King Jan III Sobieski.26 Still, the Sarmatian variant

J. Gola, M. Sitkowska, A. Szewczyk, Warszawa 2012, pp. 40-55, herep. 47. Foildore inspira-
tions in Polish painting are presented in I. Luba, Dialog nowoczesności z tradycją. Malarstwo
polskie dwudziestolecia międzywojennego, Warszawa 2004.
24 "[T]he specificity of that painting [of the late medieval guilds in Poland] did not yet
show outstanding national features but, owing most of its formal inspirations to the art of
the neighboring countries, in the first place to various German and Czech influences, found
its place in the socio-cultural structure of Poland in those times, in a sense representing the
democratic-bourgeois urban culture [emphasis - A. S. L.] of the Jagiellonian era." Walicki,
"Z badań nad problemem narodowości," p. 94.
25 "Realizing such an enormous number of foreign names, which we must list even in
our brief outline, the overwhelmed reader may ask if in the first half of the 17th century there
were no outstanding artists who were Polish. Fortunately, current research in progres sheds
more and more light on the active Polish element. Due to the dominant eclecticism and
many tendencies present in the official and court art., we will search for more independent
art in more modest production of the guilds with its strong connection to the vernacular
tradition." It was the "bourgeois milieu of the guild art" that continued the late gothic tra-
ditions. A good example was the art of Krzysztof Boguszewski who demonstrated a "strong
tendency to linear stylization and strict symmetry, so different horn the spirit of the ba-
roque." Walicki, Starzyński, Dzieje sztuki polskiej, p. 1071f. (p. 175f.), see also p. lOólf.
(p. 165f.).
26 Ibidem, p. HOff. (p. 209ff.): Chapter III: The baroque in its full bloom during the
reign of Jan III.