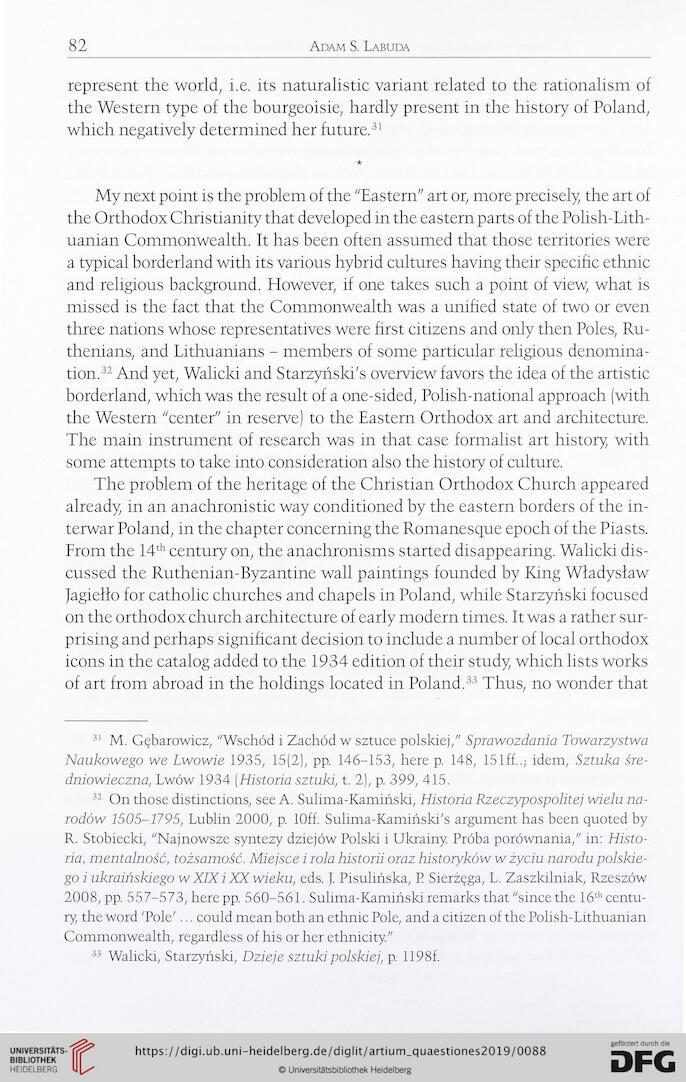 represent the world, i.e. its naturalistic variant related to the rationalism of
the Western type of the bourgeoisie, hardly present in the history of Poland,
which negatively determined her future.31

My next point is the problem of the "Eastern" art or, more precisely the art of
the Orthodox Christianity that developed in the eastern parts of the Polish-Lith-
uanian Commonwealth. It has been often assumed that those territories were
a typical borderland with its various hybrid cultures having their specific ethnic
and religious background. However, if one takes such a point of view, what is
missed is the fact that the Commonwealth was a unified state of two or even
three nations whose representatives were first citizens and only then Poles, Ru-
thenians, and Lithuanians - members of some particular religious denomina-
tion.32 And yet, Walicki and Starzynski's overview favors the idea of the artistic
borderland, which was the result of a one-sided, Polish-national approach (with
the Western "center" in reserve) to the Eastern Orthodox art and architecture.
The main instrument of research was in that case formalist art history with
some attempts to take into consideration also the history of culture.
The problem of the heritage of the Christian Orthodox Church appeared
already, in an anachronistic way conditioned by the eastern borders of the in-
terwar Poland, in the chapter concerning the Romanesque epoch of the Piasts.
From the 14th century on, the anachronisms started disappearing. Walicki dis-
cussed the Ruthenian-Byzantine wall paintings founded by King Władysław
Jagiełło for catholic churches and chapels in Poland, while Starzyński focused
on the orthodox church architecture of early modern times. It was a rather sur-
prising and perhaps significant decision to include a number of local orthodox
icons in the catalog added to the 1934 edition of their study which lists works
of art from abroad in the holdings located in Poland.33 Thus, no wonder that