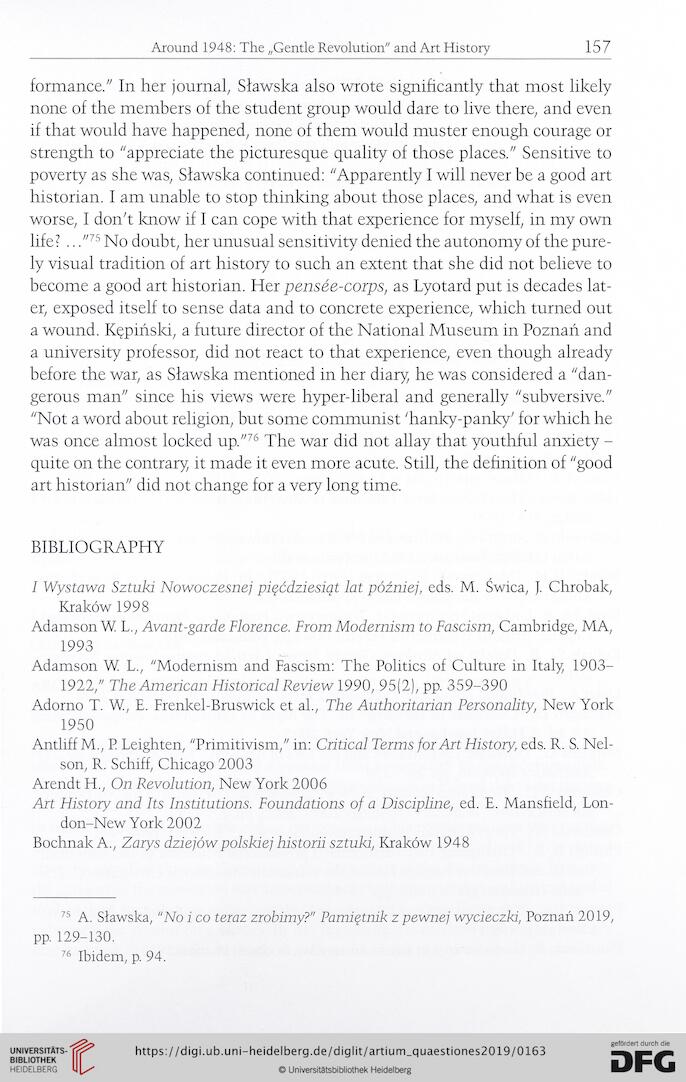 Information about OCR text
Around 1948: The „Gentle Revolution" and Art History 157
formance." In her journal, Sławska also wrote significantly that most likely
none of the members of the student group would dare to live there, and even
if that would have happened, none of them would muster enough courage or
strength to "appreciate the picturesque quality of those places." Sensitive to
poverty as she was, Sławska continued: "Apparently I will never be a good art
historian. I am unable to stop thinking about those places, and what is even
worse, I don't know if I can cope with that experience for myself, in my own
life? .. ,"75 No doubt, her unusual sensitivity denied the autonomy of the pure-
ly visual tradition of art history to such an extent that she did not believe to
become a good art historian. Her pensée-corps, as Lyotard put is decades lat-
er, exposed itself to sense data and to concrete experience, which turned out
a wound. Kępiński, a future director of the National Museum in Poznań and
a university professor, did not react to that experience, even though already
before the war, as Sławska mentioned in her diary, he was considered a "dan-
gerous man" since his views were hyper-liberal and generally "subversive."
"Not a word about religion, but some communist 'hanky-panky' for which he
was once almost locked up."76 The war did not allay that youthful anxiety -
quite on the contrary, it made it even more acute. Still, the definition of "good
art historian" did not change for a very long time.
BIBLIOGRAPHY
I Wystawa Sztuki Nowoczesnej pięćdziesiąt lat później, eds. M. Świca, J. Chrobak,
Kruków 1998
Adamson W L., Avant-garde Florence. From Modernism to Fascism, Cambridge, MA,
1993
Adamson W L., "Modernism and Fascism: The Politics of Culture in Italy 1903-
1922," The American Historical Review 1990, 95(2), pp. 359-390
Adorno T. W, E. Frenkel-Bmswick et al., The Authoritarian Personality, New York
1950
Antliff M., P heighten, "Primitivism," in: Critical Terms for Art History, eds. R. S. Nel-
son, R. Schiff, Chicago 2003
Arendt H., On Revolution, New York 2006
Art History and Its Institutions. Foundations of a Discipline, ed. E. Mansfield, Lon-
don-New York 2002
Bochnak A., Zarys dziejów polskiej historii sztuki, Kraków 1948