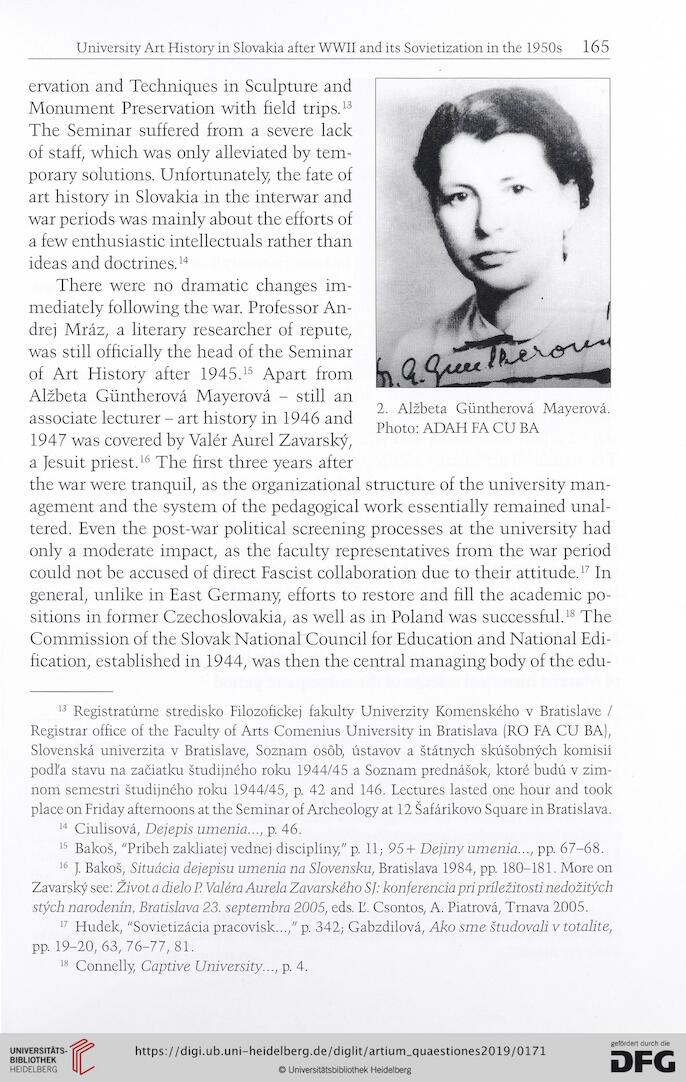 ervation and Techniques in Sculpture and
Monument Preservation with held trips.13
The Seminar suffered from a severe lack
of staff, which was only alleviated by tem-
porary solutions. Unfortunately the fate of
art history in Slovakia in the interwar and
war periods was mainly about the efforts of
a few enthusiastic intellectuals rather than
ideas and doctrines.14
There were no dramatic changes im-
mediately following the war. Professor An-
drej Mrâz, a literary researcher of repute,
was still officially the head of the Seminar
of Art History after 1945.15 Apart from
Alźbeta Güntherovâ Mayerovâ - still an
associate lecturer - art history in 1946 and
1947 was covered by Valer Aurel Zavarsky,
a Jesuit priest.16 The first three years after
the war were tranquil, as the organizational structure of the university man-
agement and the system of the pedagogical work essentially remained unal-
tered. Even the post-war political screening processes at the university had
only a moderate impact, as the faculty representatives from the war period
could not be accused of direct Fascist collaboration due to their attitude.17 In
general, unlike in East Germany, efforts to restore and fill the academic po-
sitions in former Czechoslovakia, as well as in Poland was successful.18 The
Commission of the Slovak National Council for Education and National Edi-
fication, established in 1944, was then the central managing body of the edu-