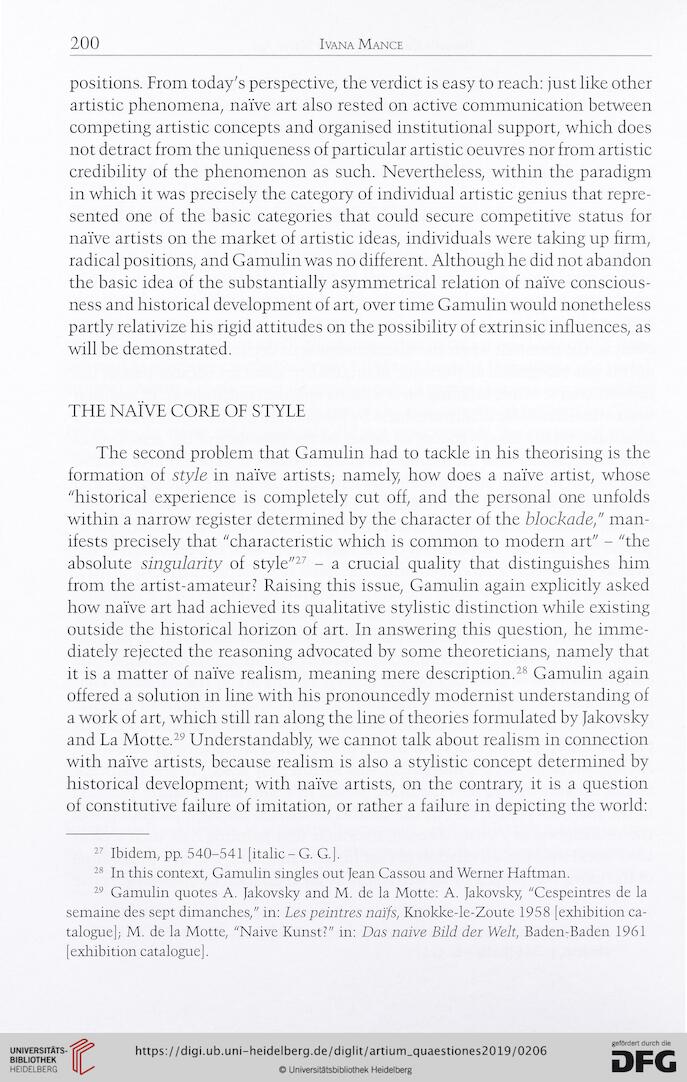 Information about OCR text
200 Ivana Mance
positions. From today's perspective, the verdict is easy to reach: just like other
artistic phenomena, naive art also rested on active communication between
competing artistic concepts and organised institutional support, which does
not detract from the uniqueness of particular artistic oeuvres nor from artistic
credibility of the phenomenon as such. Nevertheless, within the paradigm
in which it was precisely the category of individual artistic genius that repre-
sented one of the basic categories that could secure competitive status for
naïve artists on the market of artistic ideas, individuals were taking up him,
radical positions, and Gamulin was no different. Although he did not abandon
the basic idea of the substantially asymmetrical relation of naive conscious-
ness and historical development of art, over time Gamulin would nonetheless
partly relativize his rigid attitudes on the possibility of extrinsic influences, as
will be demonstrated.
THE NAÏVE CORE OF STYLE
The second problem that Gamulin had to tackle in his theorising is the
formation of style in naïve artists,- namely, how does a naïve artist, whose
"historical experience is completely cut off, and the personal one unfolds
within a narrow register determined by the character of the blockade," man-
ifests precisely that "characteristic which is common to modern art" - "the
absolute singularity of style"27 - a crucial quality that distinguishes him
from the artist-amateur? Raising this issue, Gamulin again explicitly asked
how naïve art had achieved its qualitative stylistic distinction while existing
outside the historical horizon of art. In answering this question, he imme-
diately rejected the reasoning advocated by some theoreticians, namely that
it is a matter of naïve realism, meaning mere description.28 Gamulin again
offered a solution in line with his pronouncedly modernist understanding of
a work of art, which still ran along the line of theories formulated by Jakovsky
and La Motte.29 Understandably, we cannot talk about realism in connection
with naïve artists, because realism is also a stylistic concept determined by
historical development; with naïve artists, on the contrary it is a question
of constitutive failure of imitation, or rather a failure in depicting the world: