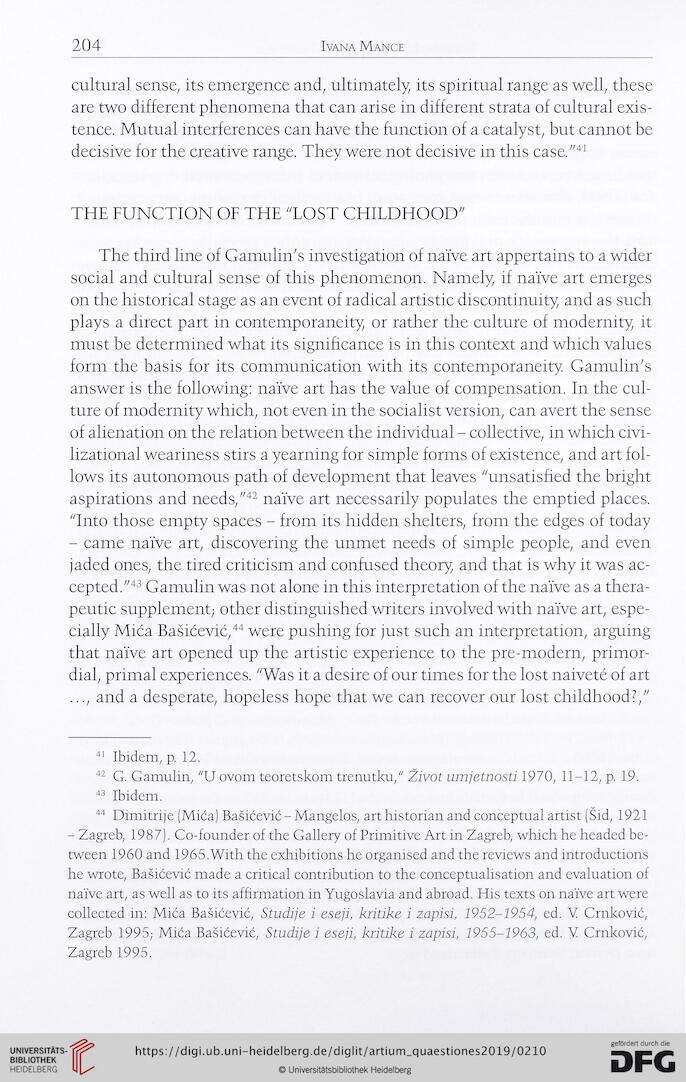 cultural sense, its emergence and, ultimately, its spiritual range as well, these
are two different phenomena that can arise in different strata of cultural exis-
tence. Mutual interferences can have the function of a catalyst, but cannot be
decisive for the creative range. They were not decisive in this case."41
THE FUNCTION OF THE "LOST CHILDHOOD"
The third line of Gamulm/s investigation of naïve art appertains to a wider
social and cultural sense of this phenomenon. Namely, if naïve art emerges
on the historical stage as an event of radical artistic discontinuity, and as such
plays a direct part in contemporaneity, or rather the culture of modernity, it
must be determined what its significance is in this context and which values
form the basis for its communication with its contemporaneity Gamulin's
answer is the following: naïve art has the value of compensation. In the cul-
ture of modernity which, not even in the socialist version, can avert the sense
of alienation on the relation between the individual - collective, in which civi-
lizational weariness stirs a yearning for simple forms of existence, and art fol-
lows its autonomous path of development that leaves "unsatisfied the bright
aspirations and needs,"42 naïve art necessarily populates the emptied places.
"Into those empty spaces - from its hidden shelters, from the edges of today
- came naïve art, discovering the unmet needs of simple people, and even
jaded ones, the tired criticism and confused theory and that is why it was ac-
cepted."43 Gamulin was not alone in this interpretation of the naïve as a thera-
peutic supplement; other distinguished writers involved with naïve art, espe-
cially Mica Basicevic,44 were pushing for just such an interpretation, arguing
that naïve art opened up the artistic experience to the pre-modern, primor-
dial, primal experiences. "Was it a desire of our times for the lost naivete of art
..., and a desperate, hopeless hope that we can recover our lost childhood?,"