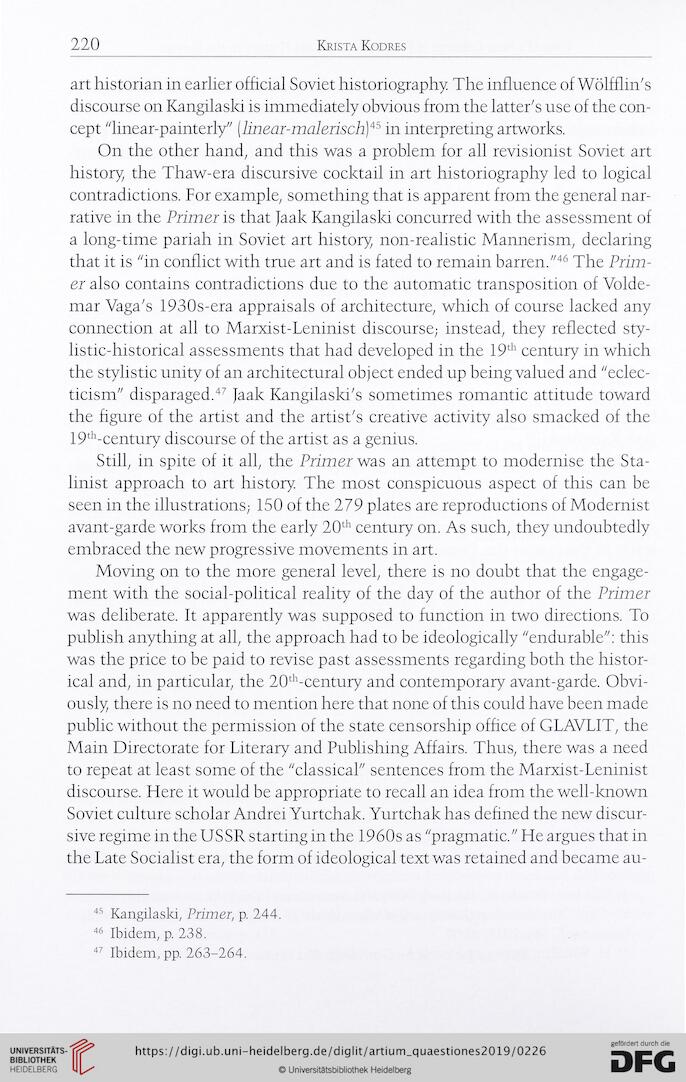 art historian in earlier official Soviet historiography The influence of Wölfflin's
discourse on Kangilaski is immediately obvious from the latter's use of the con-
cept "linear-painterly" (linear-malerisch)45 in interpreting artworks.
On the other hand, and this was a problem for all revisionist Soviet art
history the Thaw-era discursive cocktail in art historiography led to logical
contradictions. For example, something that is apparent from the general nar-
rative in the Primer is that Jaak Kangilaski concurred with the assessment of
a long-time pariah in Soviet art history, non-realistic Mannerism, declaring
that it is "in conflict with true art and is fated to remain barren."46 The Prim-
er also contains contradictions due to the automatic transposition of Volde-
mar Vaga's 1930s-era appraisals of architecture, which of course lacked any
connection at all to Marxist-Leninist discourse; instead, they reflected sty-
listic-historical assessments that had developed in the 19th century in which
the stylistic unity of an architectural object ended up being valued and "eclec-
ticism" disparaged.47 Jaak Kangilaski's sometimes romantic attitude toward
the figure of the artist and the artist's creative activity also smacked of the
19th-century discourse of the artist as a genius.
Still, in spite of it all, the Primer was an attempt to modernise the Sta-
linist approach to art history. The most conspicuous aspect of this can be
seen in the illustrations; 150 of the 279 plates are reproductions of Modernist
avant-garde works from the early 20th century on. As such, they undoubtedly
embraced the new progressive movements in art.
Moving on to the more general level, there is no doubt that the engage-
ment with the social-political reality of the day of the author of the Primer
was deliberate. It apparently was supposed to function in two directions. To
publish anything at all, the approach had to be ideologically "endurable": this
was the price to be paid to revise past assessments regarding both the histor-
ical and, in particular, the 20th-century and contemporary avant-garde. Obvi-
ously, there is no need to mention here that none of this could have been made
public without the permission of the state censorship office of GLAVLIT, the
Main Directorate for Literary and Publishing Affairs. Thus, there was a need
to repeat at least some of the "classical" sentences from the Marxist-Leninist
discourse. Here it would be appropriate to recall an idea from the well-known
Soviet culture scholar Andrei Yurtchak. Yurtchak has defined the new discur-
sive regime in the USSR starting in the 1960s as "pragmatic." He argues that in
the Late Socialist era, the form of ideological text was retained and became au-