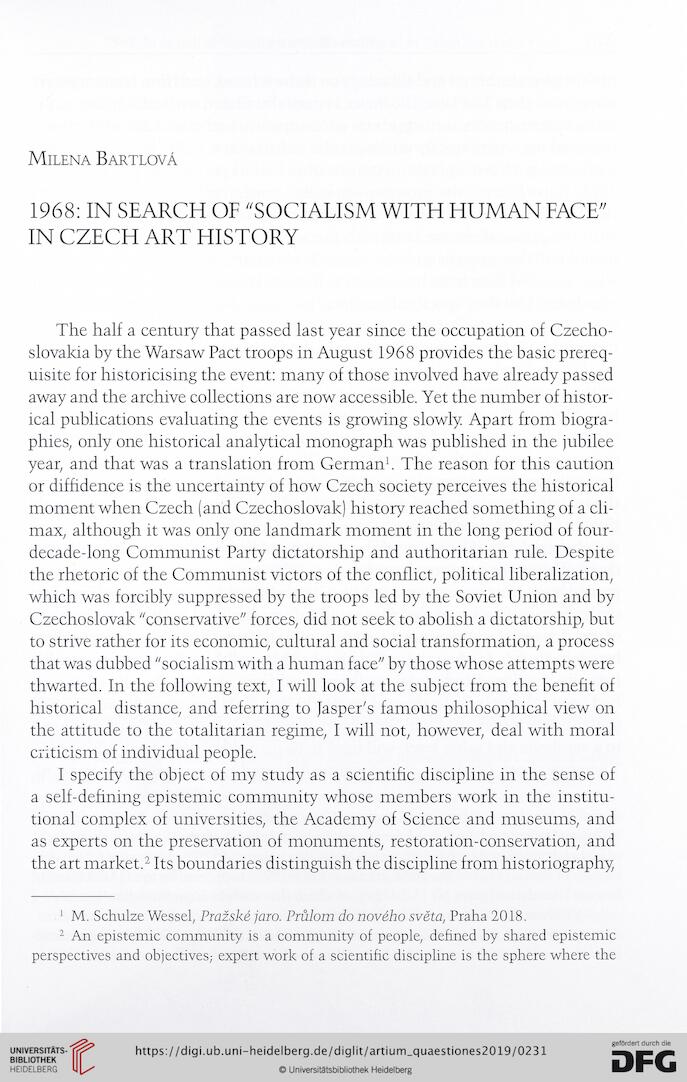 1968: IN SEARCH OF "SOCIALISM WITH HUMAN FACE"
IN CZECH ART HISTORY

The half a century that passed last year since the occupation of Czecho-
slovakia by the Warsaw Pact troops in August 1968 provides the basic prereq-
uisite for historicising the event: many of those involved have already passed
away and the archive collections are now accessible. Yet the number of histor-
ical publications evaluating the events is growing slowly Apart from biogra-
phies, only one historical analytical monograph was published in the jubilee
year, and that was a translation from German1. The reason for this caution
or diffidence is the uncertainty of how Czech society perceives the historical
moment when Czech (and Czechoslovak) history reached something of a cli-
max, although it was only one landmark moment in the long period of four-
decade-long Communist Party dictatorship and authoritarian rule. Despite
the rhetoric of the Communist victors of the conflict, political liberalization,
which was forcibly suppressed by the troops led by the Soviet Union and by
Czechoslovak "conservative" forces, did not seek to abolish a dictatorship, but
to strive rather for its economic, cultural and social transformation, a process
that was dubbed "socialism with a human face" by those whose attempts were
thwarted. In the following text, I will look at the subject from the benefit of
historical distance, and referring to Jasper's famous philosophical view on
the attitude to the totalitarian regime, I will not, however, deal with moral
criticism of individual people.
I specify the object of my study as a scientific discipline in the sense of
a self-defining epistemic community whose members work in the institu-
tional complex of universities, the Academy of Science and museums, and
as experts on the preservation of monuments, restoration-conservation, and
the art market.2 Its boundaries distinguish the discipline from historiography,

1 M. Schulze Wessel, Prazské jaro. Prułom do nového svela, Praha 2018.
2 An epistemic community is a community of people, defined by shared epistemic
perspectives and objectives; expert work of a scientific discipline is the sphere where the