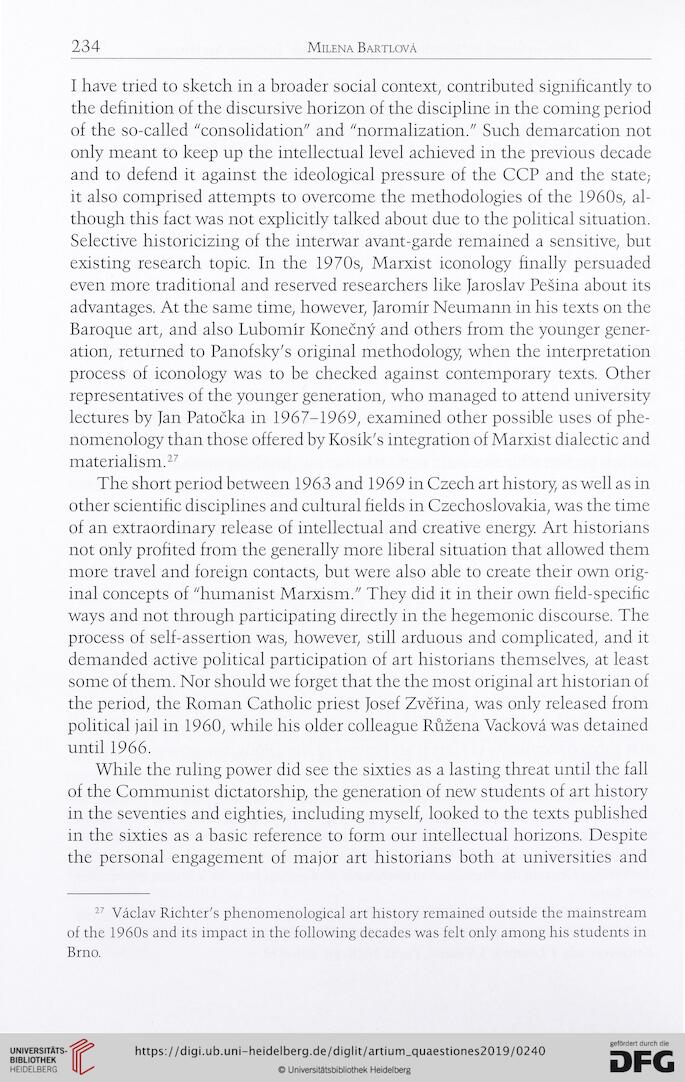 I have tried to sketch in a broader social context, contributed significantly to
the definition of the discursive horizon of the discipline in the coming period
of the so-called "consolidation" and "normalization." Such demarcation not
only meant to keep up the intellectual level achieved in the previous decade
and to defend it against the ideological pressure of the CCP and the state;
it also comprised attempts to overcome the methodologies of the 1960s, al-
though this fact was not explicitly talked about due to the political situation.
Selective historicizing of the interwar avant-garde remained a sensitive, but
existing research topic. In the 1970s, Marxist iconology dually persuaded
even more traditional and reserved researchers like Jaroslav Peśina about its
advantages. At the same time, however, Jaromir Neumann in his texts on the
Baroque art, and also Lubomir Konećny and others from the younger gener-
ation, returned to Panofsky's original methodology, when the interpretation
process of iconology was to be checked against contemporary texts. Other
representatives of the younger generation, who managed to attend university
lectures by Jan Patoćka m 1967-1969, examined other possible uses of phe-
nomenology than those offered by Kosik's integration of Marxist dialectic and
materialism.27
The short period between 1963 and 1969 in Czech art history, as well as in
other scientific disciplines and cultural Helds in Czechoslovakia, was the time
of an extraordinary release of intellectual and creative energy Art historians
not only profited from the generally more liberal situation that allowed them
more travel and foreign contacts, but were also able to create their own orig-
inal concepts of "humanist Marxism." They did it in their own field-specific
ways and not through participating directly in the hegemonic discourse. The
process of self-assertion was, however, still arduous and complicated, and it
demanded active political participation of art historians themselves, at least
some of them. Nor should we forget that the the most original art historian of
the period, the Roman Catholic priest Josef Zvefina, was only released from
political jail in 1960, while his older colleague Rûzena Vackovâ was detained
until 1966.
While the ruling power did see the sixties as a lasting threat until the fall
of the Communist dictatorship, the generation of new students of art history
in the seventies and eighties, including myself, looked to the texts published
in the sixties as a basic reference to form our intellectual horizons. Despite
the personal engagement of major art historians both at universities and

27 Vâclav Richter's phenomenological art history remained outside the mainstream
of the 1960s and its impact in the following decades was felt only among his students in
Brno.