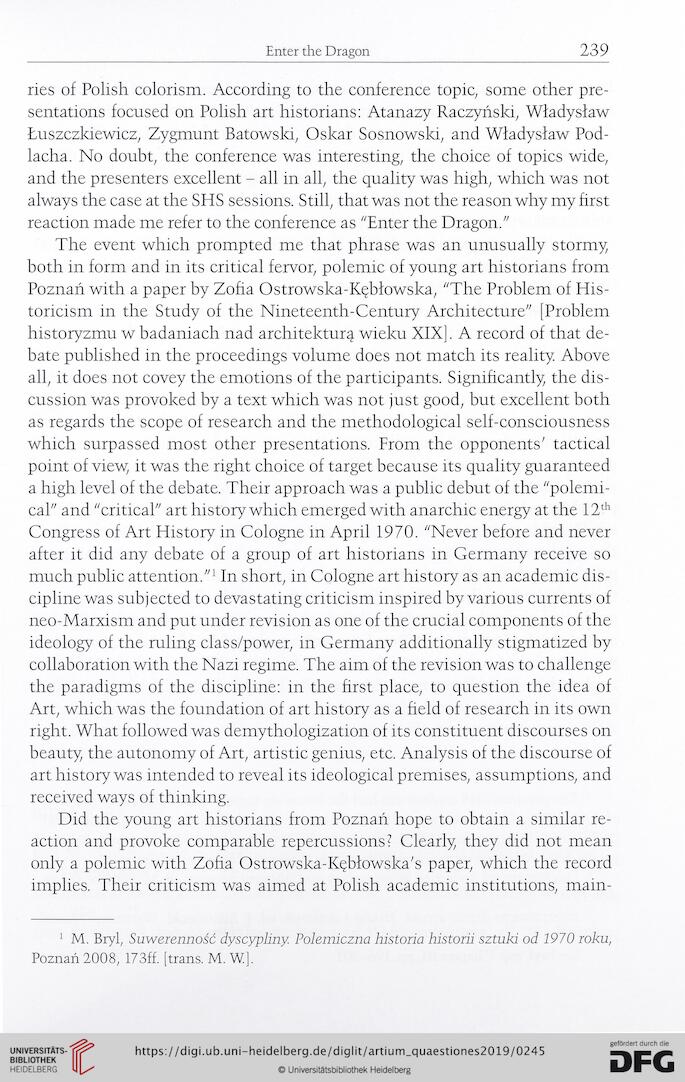 ries of Polish colorism. According to the conference topic, some other pre-
sentations focused on Polish art historians: Atanazy Raczyński, Władysław
Łuszczkiewicz, Zygmunt Batowski, Oskar Sosnowski, and Władysław Pod-
lacha. No doubt, the conference was interesting, the choice of topics wide,
and the presenters excellent - all in all, the quality was high, which was not
always the case at the SHS sessions. Still, that was not the reason why my first
reaction made me refer to the conference as "Enter the Dragon."
The event which prompted me that phrase was an unusually stormy,
both in form and in its critical fervor, polemic of young art historians from
Poznań with a paper by Zofia Ostrowska-Kębłowska, "The Problem of His-
toricism in the Study of the Nineteenth-Century Architecture" [Problem
historyzmu w badaniach nad architekturą wieku XIX]. A record of that de-
bate published in the proceedings volume does not match its reality Above
all, it does not covey the emotions of the participants. Significantly, the dis-
cussion was provoked by a text which was not just good, but excellent both
as regards the scope of research and the methodological self-consciousness
which surpassed most other presentations. From the opponents' tactical
point of view, it was the right choice of target because its quality guaranteed
a high level of the debate. Their approach was a public debut of the "polemi-
cal" and "critical" art history which emerged with anarchic energy at the 12th
Congress of Art History in Cologne in April 1970. "Never before and never
after it did any debate of a group of art historians in Germany receive so
much public attention."1 In short, in Cologne art history as an academic dis-
cipline was subjected to devastating criticism inspired by various currents of
neo-Marxism and put under revision as one of the crucial components of the
ideology of the ruling class/power, in Germany additionally stigmatized by
collaboration with the Nazi regime. The aim of the revision was to challenge
the paradigms of the discipline: in the Erst place, to question the idea of
Art, which was the foundation of art history as a held of research in its own
right. What followed was demythologization of its constituent discourses on
beauty, the autonomy of Art, artistic genius, etc. Analysis of the discourse of
art history was intended to reveal its ideological premises, assumptions, and
received ways of thinking.
Did the young art historians from Poznań hope to obtain a similar re-
action and provoke comparable repercussions? Clearly they did not mean
only a polemic with Zofia Ostrowska-Kębłowska's paper, which the record
implies. Their criticism was aimed at Polish academic institutions, main-