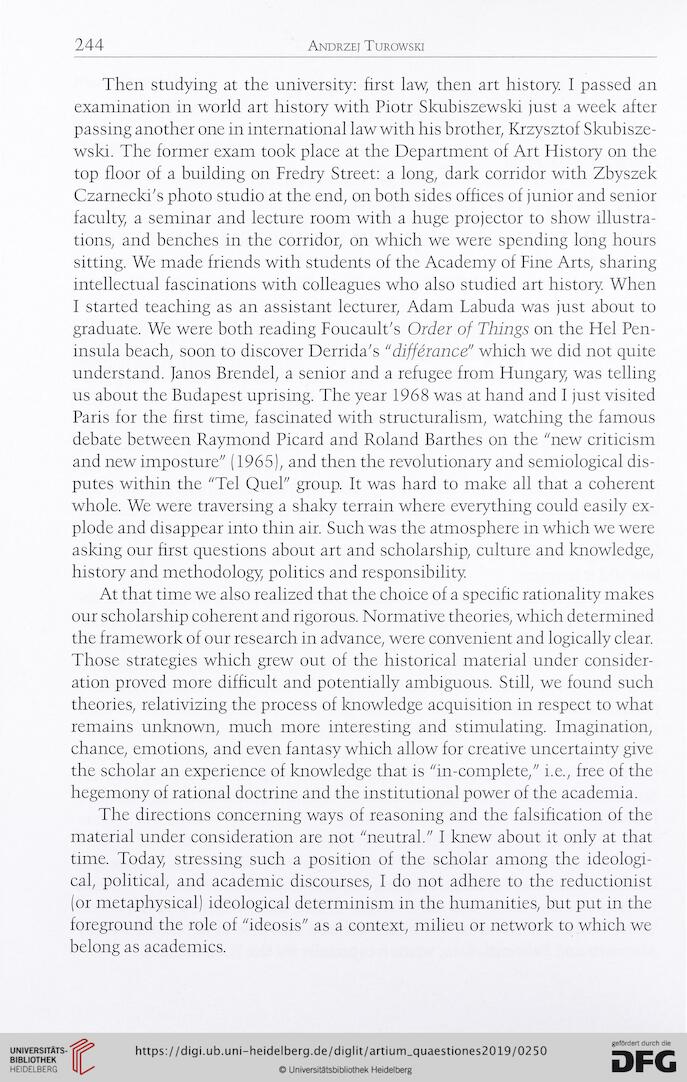 Information about OCR text
244 Andrzej Turowski
Then studying at the university: first law, then art history I passed an
examination in world art history with Piotr Skubiszewski just a week after
passing another one in international law with his brother, Krzysztof Skubisze-
wski. The former exam took place at the Department of Art History on the
top floor of a building on Fredry Street: a long, dark corridor with Zbyszek
Czarnecki's photo studio at the end, on both sides offices of junior and senior
faculty a seminar and lecture room with a huge projector to show illustra-
tions, and benches in the corridor, on which we were spending long hours
sitting. We made friends with students of the Academy of Fine Arts, sharing
intellectual fascinations with colleagues who also studied art history. When
I started teaching as an assistant lecturer, Adam Labuda was just about to
graduate. We were both reading Foucault's Order of Things on the Hel Pen-
insula beach, soon to discover Derrida's "différance" which we did not quite
understand. Janos Brendel, a senior and a refugee from Hungary, was telling
us about the Budapest uprising. The year 1968 was at hand and I just visited
Paris for the first time, fascinated with structuralism, watching the famous
debate between Raymond Picard and Roland Barthes on the "new criticism
and new imposture" ( 1965), and then the revolutionary and semiological dis-
putes within the "Tel Quel" group. It was hard to make all that a coherent
whole. We were traversing a shaky terrain where everything could easily ex-
plode and disappear into thin air. Such was the atmosphere in which we were
asking our first questions about art and scholarship, culture and knowledge,
history and methodology, politics and responsibility
At that time we also realized that the choice of a specific rationality makes
our scholarship coherent and rigorous. Normative theories, which determined
the framework of our research in advance, were convenient and logically clear.
Those strategies which grew out of the historical material under consider-
ation proved more difficult and potentially ambiguous. Still, we found such
theories, relativizing the process of knowledge acquisition in respect to what
remains unimown, much more interesting and stimulating. Imagination,
chance, emotions, and even fantasy which allow for creative uncertainty give
the scholar an experience of knowledge that is "in-complete," i.e., free of the
hegemony of rational doctrine and the institutional power of the academia.
The directions concerning ways of reasoning and the falsification of the
material under consideration are not "neutral." I knew about it only at that
time. Today stressing such a position of the scholar among the ideologi-
cal, political, and academic discourses, I do not adhere to the reductionist
(or metaphysical) ideological determinism in the humanities, but put in the
foreground the role of "ideosis" as a context, milieu or network to which we
belong as academics.