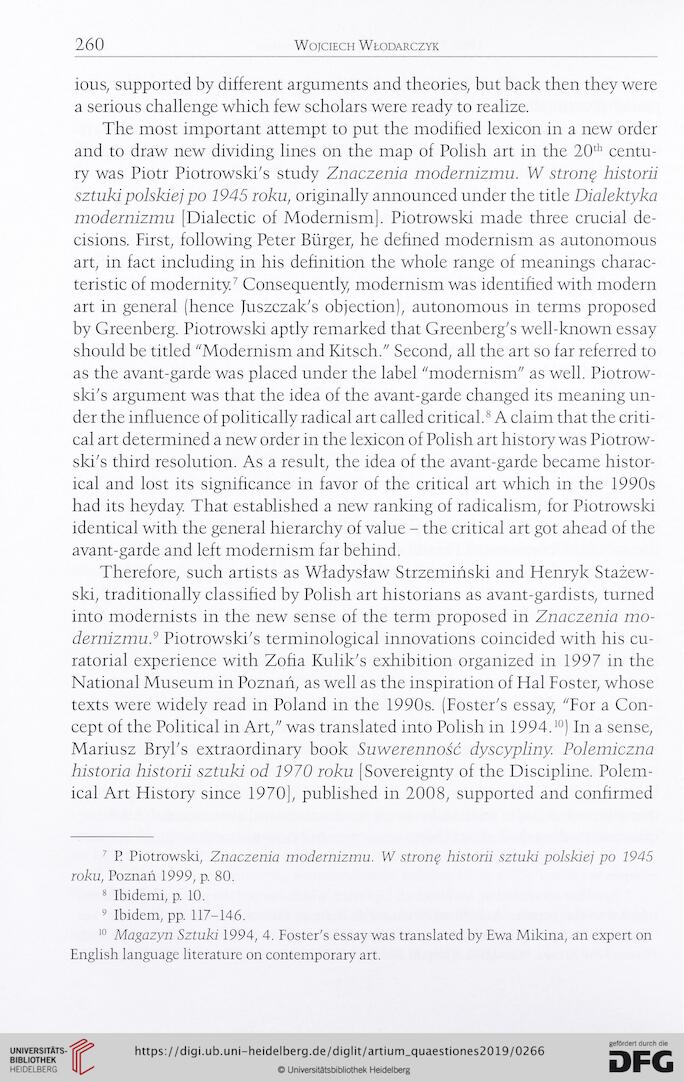 ious, supported by different arguments and theories, but back then they were
a serious challenge which few scholars were ready to realize.
The most important attempt to put the modified lexicon in a new order
and to draw new dividing lines on the map of Polish art in the 20th centu-
ry was Piotr Piotrowski's study Znaczenia modernizmu. W stronę historii
sztuki polskiej po 1945 roku, originally announced under the title Dialektyka
modernizmu [Dialectic of Modernism], Piotrowski made three crucial de-
cisions. First, following Peter Bürger, he defined modernism as autonomous
art, in fact including in his definition the whole range of meanings charac-
teristic of modernity.7 Consequently, modernism was identified with modern
art in general (hence Juszczak's objection), autonomous in terms proposed
by Greenberg. Piotrowski aptly remarked that Greenberg's well-known essay
should be titled "Modernism and Kitsch." Second, all the art so far referred to
as the avant-garde was placed under the label "modernism" as well. Piotrow-
ski's argument was that the idea of the avant-garde changed its meaning un-
der the influence of politically radical art called critical.8 A claim that the criti-
cal art determined a new order in the lexicon of Polish art history was Piotrow-
ski's third resolution. As a result, the idea of the avant-garde became histor-
ical and lost its significance in favor of the critical art which in the 1990s
had its heyday. That established a new ranking of radicalism, for Piotrowski
identical with the general hierarchy of value - the critical art got ahead of the
avant-garde and left modernism far behind.
Therefore, such artists as Władysław Strzemiński and Henryk Stażew-
ski, traditionally classified by Polish art historians as avant-gardists, turned
into modernists in the new sense of the term proposed in Znaczenia mo-
dernizmu.9 Piotrowski's terminological innovations coincided with his cu-
ratorial experience with Zofia Kulik's exhibition organized in 1997 in the
National Museum in Poznań, as well as the inspiration of Hal Foster, whose
texts were widely read in Poland in the 1990s. (Foster's essay, "For a Con-
cept of the Political in Art," was translated into Polish in 1994.10) In a sense,
Mariusz Bryl's extraordinary book Suwerenność dyscypliny. Polemiczna
historia historii sztuki od 1970 roku [Sovereignty of the Discipline. Polem-
ical Art History since 1970], published in 2008, supported and confirmed