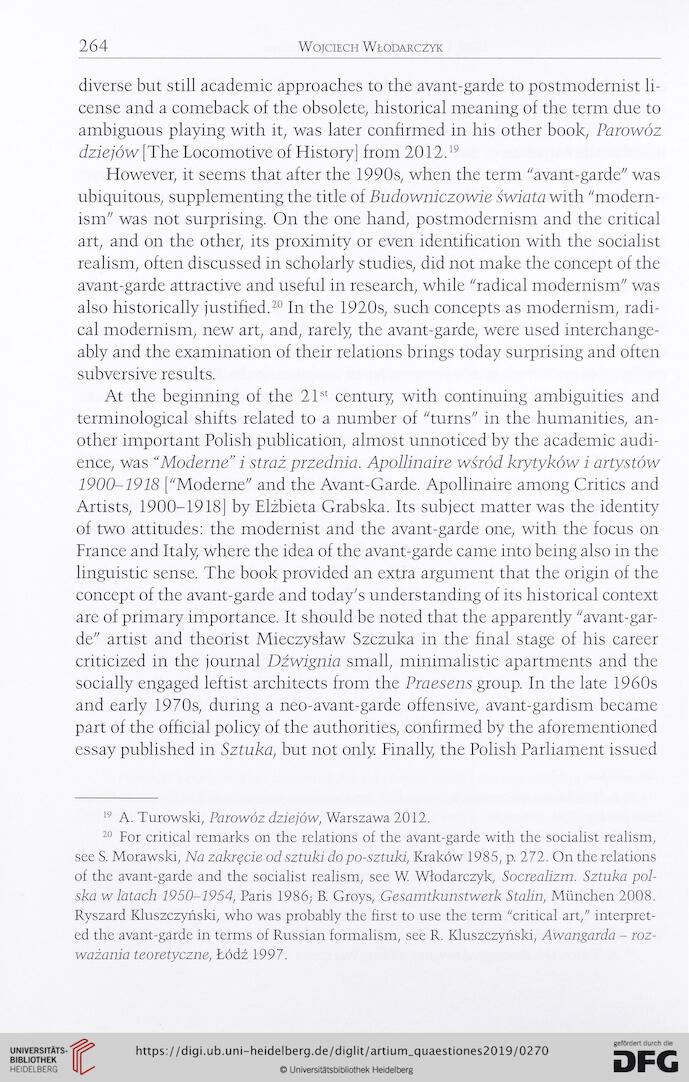 Information about OCR text
264 Wojciech Włodarczyk
diverse but still academic approaches to the avant-garde to postmodernist li-
cense and a comeback of the obsolete, historical meaning of the term due to
ambiguous playing with it, was later confirmed in his other book, Parowóz
dziejów [The Locomotive of History] from 2012.19
However, it seems that after the 1990s, when the term "avant-garde77 was
ubiquitous, supplementing the title of Budowniczowie świata with "modern-
ism77 was not surprising. On the one hand, postmodernism and the critical
art, and on the other, its proximity or even identification with the socialist
realism, often discussed in scholarly studies, did not make the concept of the
avant-garde attractive and useful in research, while "radical modernism77 was
also historically justified.20 In the 1920s, such concepts as modernism, radi-
cal modernism, new art, and, rarely the avant-garde, were used interchange-
ably and the examination of their relations brings today surprising and often
subversive results.
At the beginning of the 21st century with continuing ambiguities and
terminological shifts related to a number of "turns77 in the humanities, an-
other important Polish publication, almost unnoticed by the academic audi-
ence, was “Moderne” i straż przednia. Apollinaire wśród krytyków i artystów
1900-1918 ["Moderne77 and the Avant-Garde. Apollinaire among Critics and
Artists, 1900-1918] by Elżbieta Grabska. Its subject matter was the identity
of two attitudes: the modernist and the avant-garde one, with the focus on
France and Italy, where the idea of the avant-garde came into being also in the
linguistic sense. The book provided an extra argument that the origin of the
concept of the avant-garde and today's understanding of its historical context
are of primary importance. It should be noted that the apparently "avant-gar-
de77 artist and theorist Mieczysław Szczuka in the final stage of his career
criticized in the journal Dźwignia small, minimalistic apartments and the
socially engaged leftist architects from the Praesens group. In the late 1960s
and early 1970s, during a neo-avant-garde offensive, avant-gardism became
part of the official policy of the authorities, confirmed by the aforementioned
essay published in Sztuka, but not only. Finally, the Polish Parliament issued