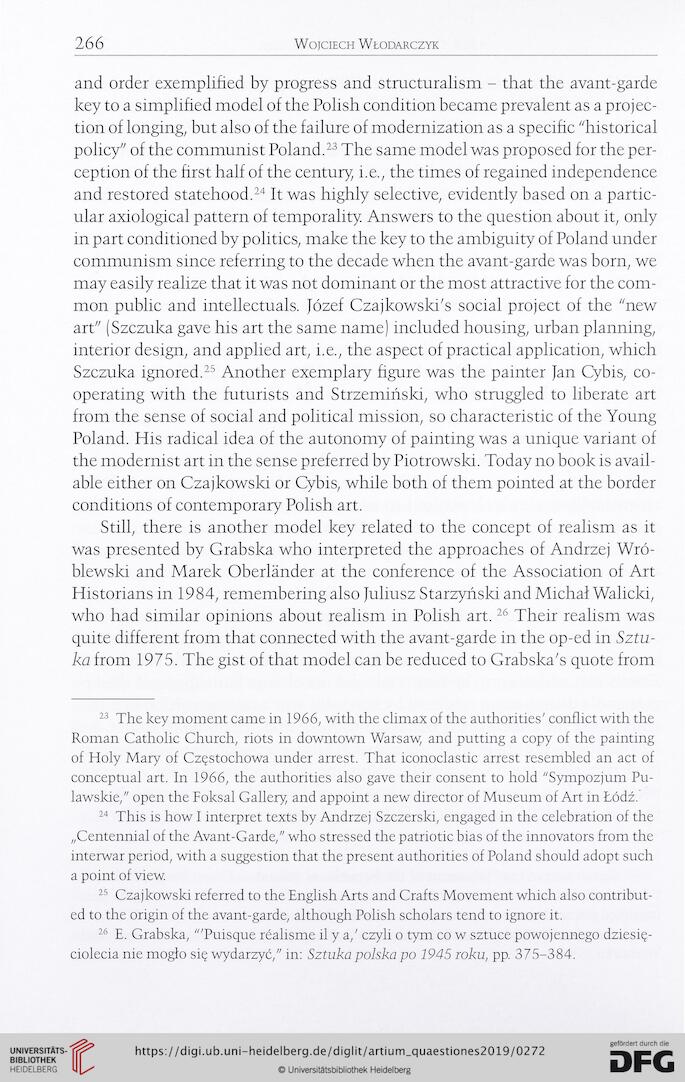 and order exemplified by progress and structuralism - that the avant-garde
key to a simplified model of the Polish condition became prevalent as a projec-
tion of longing, but also of the failure of modernization as a specific "historical
policy" of the communist Poland.23 The same model was proposed for the per-
ception of the first half of the century i.e., the times of regained independence
and restored statehood.24 It was highly selective, evidently based on a partic-
ular axiological pattern of temporality Answers to the question about it, only
in part conditioned by politics, make the key to the ambiguity of Poland under
communism since referring to the decade when the avant-garde was born, we
may easily realize that it was not dominant or the most attractive for the com-
mon public and intellectuals. Józef Czajkowski's social project of the "new
art" (Szczuka gave his art the same name) included housing, urban planning,
interior design, and applied art, i.e., the aspect of practical application, which
Szczuka ignored.25 Another exemplary figure was the painter Jan Cybis, co-
operating with the futurists and Strzemiński, who struggled to liberate art
from the sense of social and political mission, so characteristic of the Young
Poland. His radical idea of the autonomy of painting was a unique variant of
the modernist art in the sense preferred by Piotrowski. Today no book is avail-
able either on Czajkowski or Cybis, while both of them pointed at the border
conditions of contemporary Polish art.
Still, there is another model key related to the concept of realism as it
was presented by Grabska who interpreted the approaches of Andrzej Wró-
blewski and Marek Oberländer at the conference of the Association of Art
Historians in 1984, remembering also Juliusz Starzynski and Michal Walicki,
who had similar opinions about realism in Polish art.26 Their realism was
quite different from that connected with the avant-garde in the op-ed in Sztu-
ka from 1975. The gist of that model can be reduced to Grabska's quote from

23 The key moment came in 1966, with the climax of the authorities' conflict with the
Roman Catholic Church, riots in downtown Warsaw, and putting a copy of the painting
of Holy Mary of Częstochowa under arrest. That iconoclastic arrest resembled an act of
conceptual art. In 1966, the authorities also gave their consent to hold "Sympozjum Pu-
ławskie," open the Foksal Gallery, and appoint a new director of Museum of Art in Łódź.
24 This is how I interpret texts by Andrzej Szczerski, engaged in the celebration of the
„Centennial of the Avant-Garde," who stressed the patriotic bias of the innovators from the
interwar period, with a suggestion that the present authorities of Poland should adopt such
a point of view.
25 Czajkowski referred to the English Arts and Crafts Movement which also contribut-
ed to the origin of the avant-garde, although Polish scholars tend to ignore it.
26 E. Grabska, "'Puisque réalisme il y a,' czyli o tym co w sztuce powojennego dziesię-
ciolecia nie mogło się wydarzyć," in: Sztuka polska po 1945 roku, pp. 375-384.