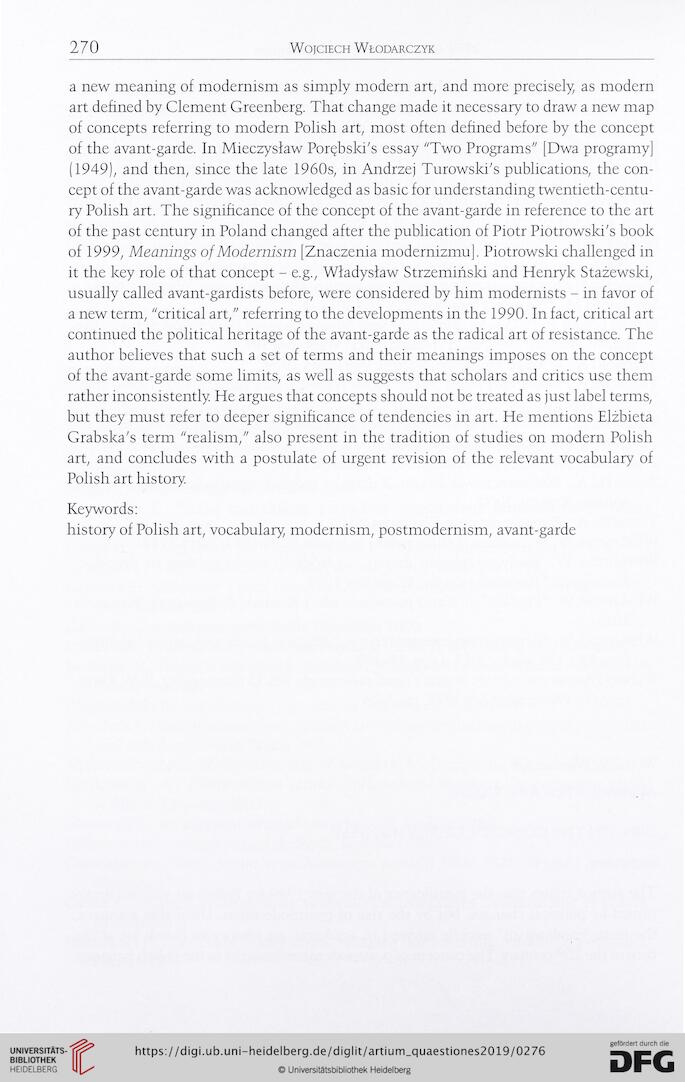 a new meaning of modernism as simply modern art, and more precisely as modern
art defined by Clement Greenberg. That change made it necessary to draw a new map
of concepts referring to modern Polish art, most often defined before by the concept
of the avant-garde. In Mieczysław Porçbski's essay "Two Programs" [Dwa programy]
(1949), and then, since the late 1960s, in Andrzej Turowski's publications, the con-
cept of the avant-garde was acknowledged as basic for understanding twentieth-centu-
ry Polish art. The significance of the concept of the avant-garde in reference to the art
of the past century in Poland changed after the publication of Piotr Piotrowski's book
of 1999, Meanings of Modernism [Znaczenia modernizmu], Piotrowski challenged in
it the key role of that concept - e.g., Władysław Strzemiński and Henryk Stażewski,
usually called avant-gardists before, were considered by him modernists - in favor of
a new term, "critical art," referring to the developments in the 1990. In fact, critical art
continued the political heritage of the avant-garde as the radical art of resistance. The
author believes that such a set of terms and their meanings imposes on the concept
of the avant-garde some limits, as well as suggests that scholars and critics use them
rather inconsistently He argues that concepts should not be treated as just label terms,
but they must refer to deeper significance of tendencies in art. He mentions Elżbieta
Grabska's term "realism," also present in the tradition of studies on modern Polish
art, and concludes with a postulate of urgent revision of the relevant vocabulary of
Polish art history.
Keywords:
history of Polish art, vocabulary, modernism, postmodernism, avant-garde