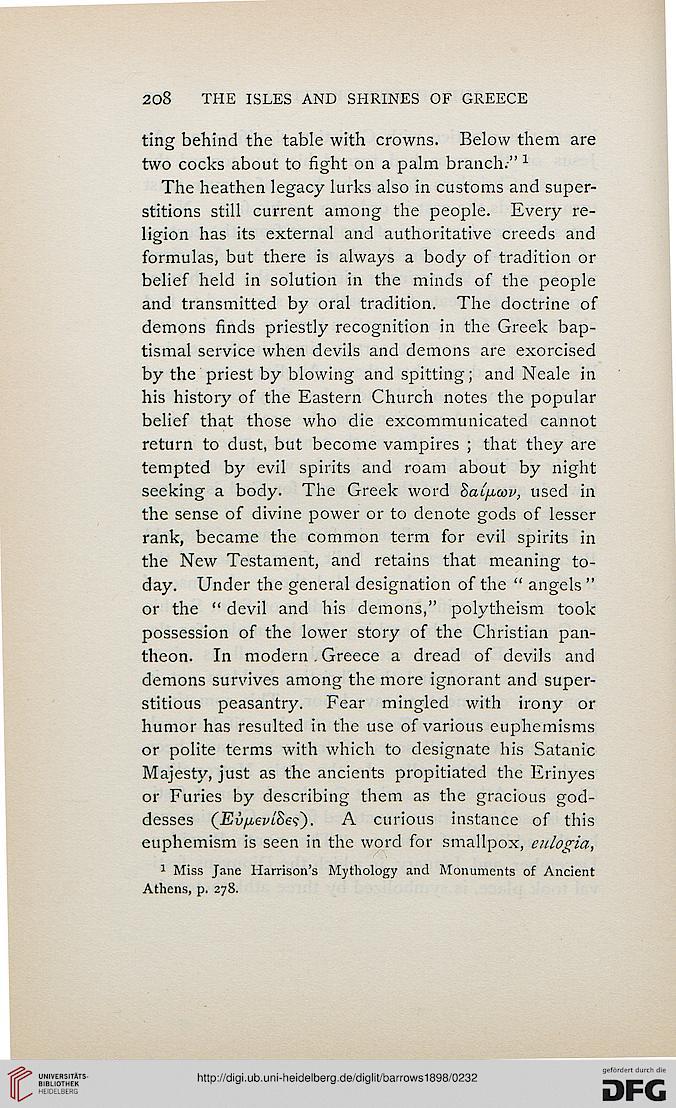 Information about OCR text
208 THE ISLES AND SHRINES OF GREECE

ting behind the table with crowns. Below them are
two cocks about to fight on a palm branch." a

The heathen legacy lurks also in customs and super-
stitions still current among the people. Every re-
ligion has its external and authoritative creeds and
formulas, but there is always a body of tradition or
belief held in solution in the minds of the people
and transmitted by oral tradition. The doctrine of
demons finds priestly recognition in the Greek bap-
tismal service when devils and demons are exorcised
by the priest by blowing and spitting; and Neale in
his history of the Eastern Church notes the popular
belief that those who die excommunicated cannot
return to dust, but become vampires ; that they are
tempted by evil spirits and roam about by night
seeking a body. The Greek word hal^wv, used in
the sense of divine power or to denote gods of lesser
rank, became the common term for evil spirits in
the New Testament, and retains that meaning to-
day. Under the general designation of the " angels "
or the " devil and his demons," polytheism took
possession of the lower story of the Christian pan-
theon. In modern Greece a dread of devils and
demons survives among the more ignorant and super-
stitious peasantry. Fear mingled with irony or
humor has resulted in the use of various euphemisms
or polite terms with which to designate his Satanic
Majesty, just as the ancients propitiated the Erinyes
or Furies by describing them as the gracious god-
desses (Ev[ievl8e<;~). A curious instance of this
euphemism is seen in the word for smallpox, culogia,