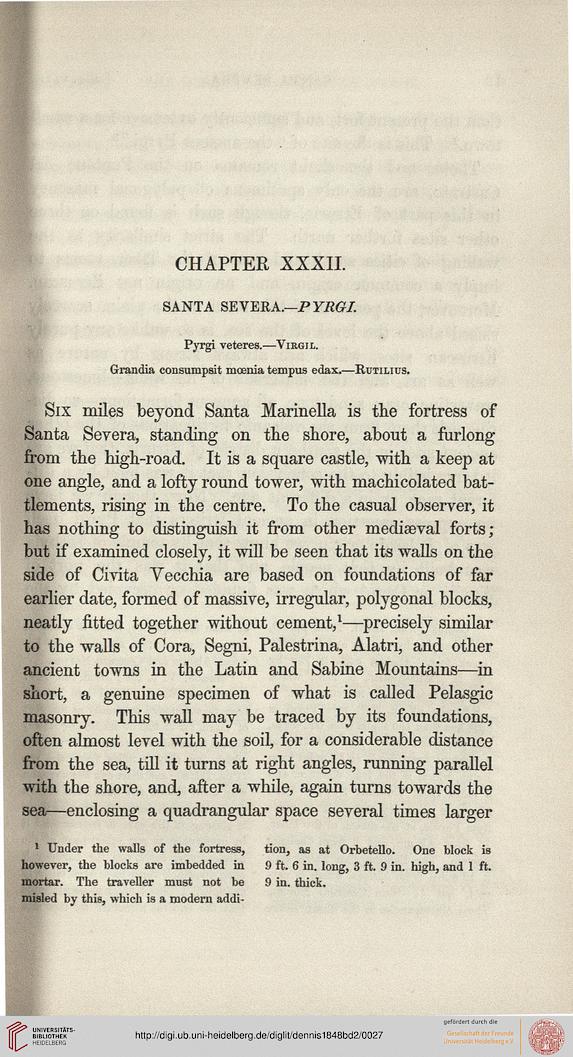 Six miles beyond Santa Marinella is the fortress of
Santa Severa, standing on the shore, about a furlong
from the high-road. It is a square castle, with a keep at
one angle, and a lofty round tower, with machicolated bat-
tlements, rising in the centre. To the casual observer, it
has nothing to distinguish it from other mediaeval forts;
but if examined closely, it will be seen that its walls on the
side of Civita Vecchia are based on foundations of far
earlier date, formed of massive, irregular, polygonal blocks,
neatly fitted together without cement,1—precisely similar
to the walls of Cora, Segni, Palestrina, Alatri, and other
ancient towns in the Latin and Sabine Mountains—in
short, a genuine specimen of what is called Pelasgic
masonry. This wall may be traced by its foundations,
often almost level with the soil, for a considerable distance
from the sea, till it turns at right angles, running parallel
with the shore, and, after a while, again turns towards the
sea—enclosing a quadrangular space several times larger

1 Under the walls of the fortress, tion, as at Orbetello. One block is

mortar. The traveller must not be 9 in. thick,
misled by this, which is a modern addi-