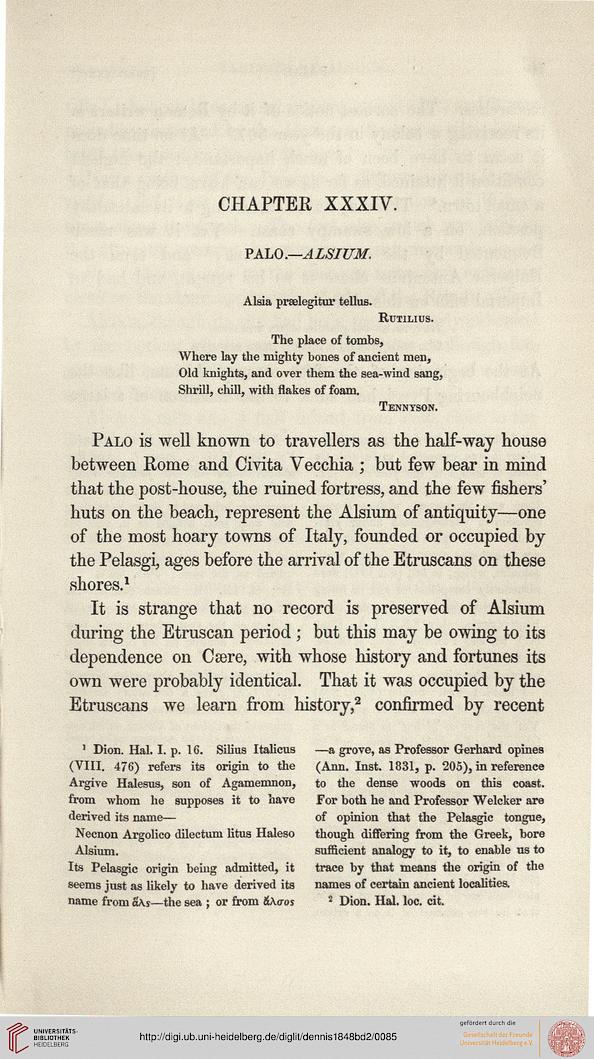 The place of tombs,
Where lay the mighty bones of ancient men.
Old knights, and over them the sea-wind sang,
Shrill, chill, with flakes of foam.

Palo is well known to travellers as the half-way house
between Rome and Civita Vecchia ; but few bear in mind
that the post-house, the ruined fortress, and the few fishers'
huts on the beach, represent the Alsium of antiquity—one
of the most hoary towns of Italy, founded or occupied by
the Pelasgi, ages before the arrival of the Etruscans on these
shores.1

It is strange that no record is preserved of Alsium
during the Etruscan period; but this may be owing to its
dependence on Caere, with whose history and fortunes its
own were probably identical. That it was occupied by the
Etruscans we learn from history,2 confirmed by recent

Argive Halesus, son of Agamemnon, to the dense woods on this coast,

derived its name— of opinion that the Pelasgic tongue,

Its Pelasgic origin being admitted, it trace by that means the origin of the

seems just as likely to have derived its names of certain ancient localities,
name from aKs—the sea ; or from &\aos J Dion. Hal. loc. cit.