Evans, Arthur J.
The Palace of Minos: a comparative account of the successive stages of the early Cretan civilization as illustred by the discoveries at Knossos (Band 4,2): Camp-stool Fresco, long-robed priests and beneficent genii [...] — London, 1935 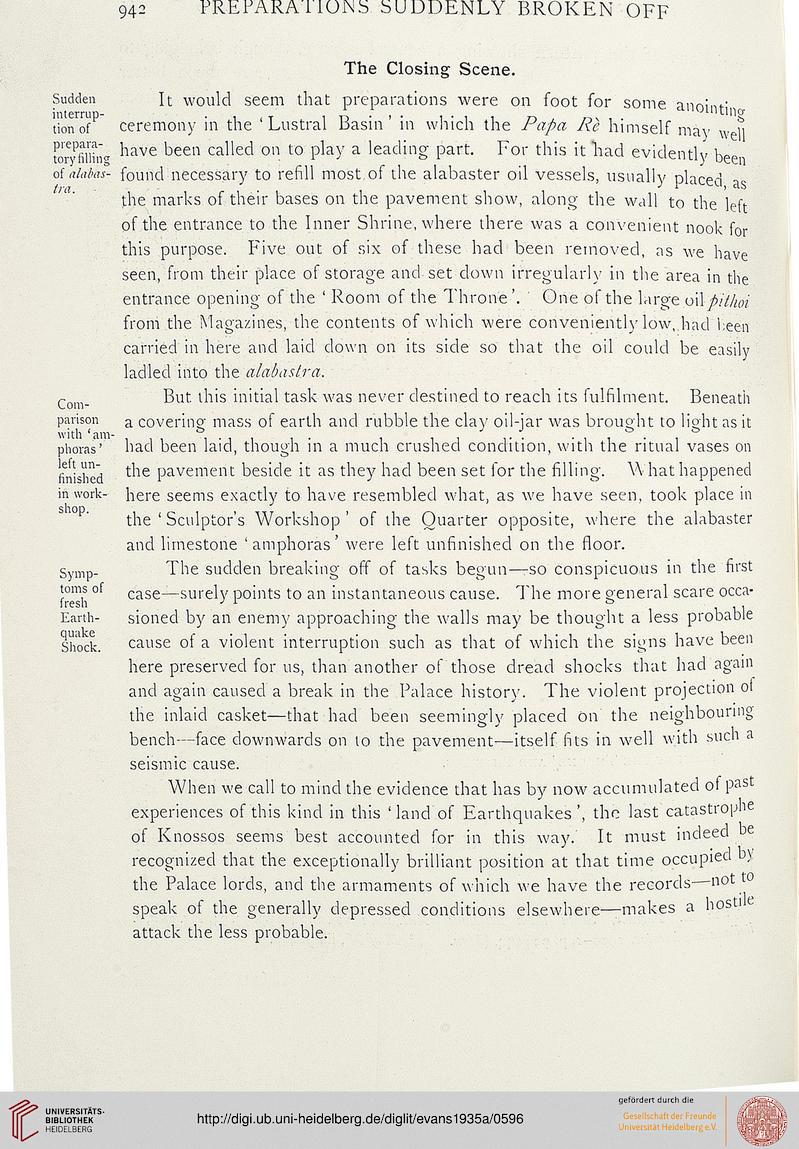 It would seem that preparations were on foot for some anoint'
ceremony in the ' Lustral Basin' in which the Papa Re himself may w 11
have been called on to play a leading part. For this it had evidently bee
found necessary to refill most of the alabaster oil vessels, usually placed
the marks of their bases on the pavement show, along the wall to the left
of the entrance to the Inner Shrine, where there was a convenient nook for
this purpose. Five out of six of these had been removed, as we have
seen, from their place of storage and set down irregularly in the area in the
entrance opening of the ' Room of the Throne'. ' One of the large oWpiihoi
from the Magazines, the contents of which were conveniently low, had been
carried in here and laid down on its side so that the oil could be easily
ladled into the alabaslra.

But. this initial task was never destined to reach its fulfilment. Beneath
a covering mass of earth and rubble the clay oil-jar was brought to light as it
had been laid, though in a much crushed condition, with the ritual vases on
the pavement beside it as they had been set for the filling. Yv hat happened
here seems exactly to have resembled what, as we have seen, took place in
the ' Sculptor's Workshop ' of the Quarter opposite, where the alabaster
and limestone ' amphoras' were left unfinished on the floor.

The sudden breaking off of tasks begun—-so conspicuous in the first
case—surely points to an instantaneous cause. The more general scare occa-
sioned by an enemy approaching the walls may be thought a less probable
cause of a violent interruption such as that of which the signs have been
here preserved for us, than another of those dread shocks that had again
and again caused a break in the Palace history. The violent projection ol
the inlaid casket—that had been seemingly placed On the neighbouring
bench—face downwards on to the pavement—itself fits in well with such a
seismic cause.

When we call to mind the evidence that has by now accumulated of past
experiences of this kind in this ' land of Earthquakes ', the last catastrophe
of Knossos seems best accounted for in this way. It must indeed £>e
recognized that the exceptionally brilliant position at that time occupied by
the Palace lords, and the armaments of which we have the records not
speak of the generally depressed conditions elsewhere—makes a lipsO
attack the less probable.