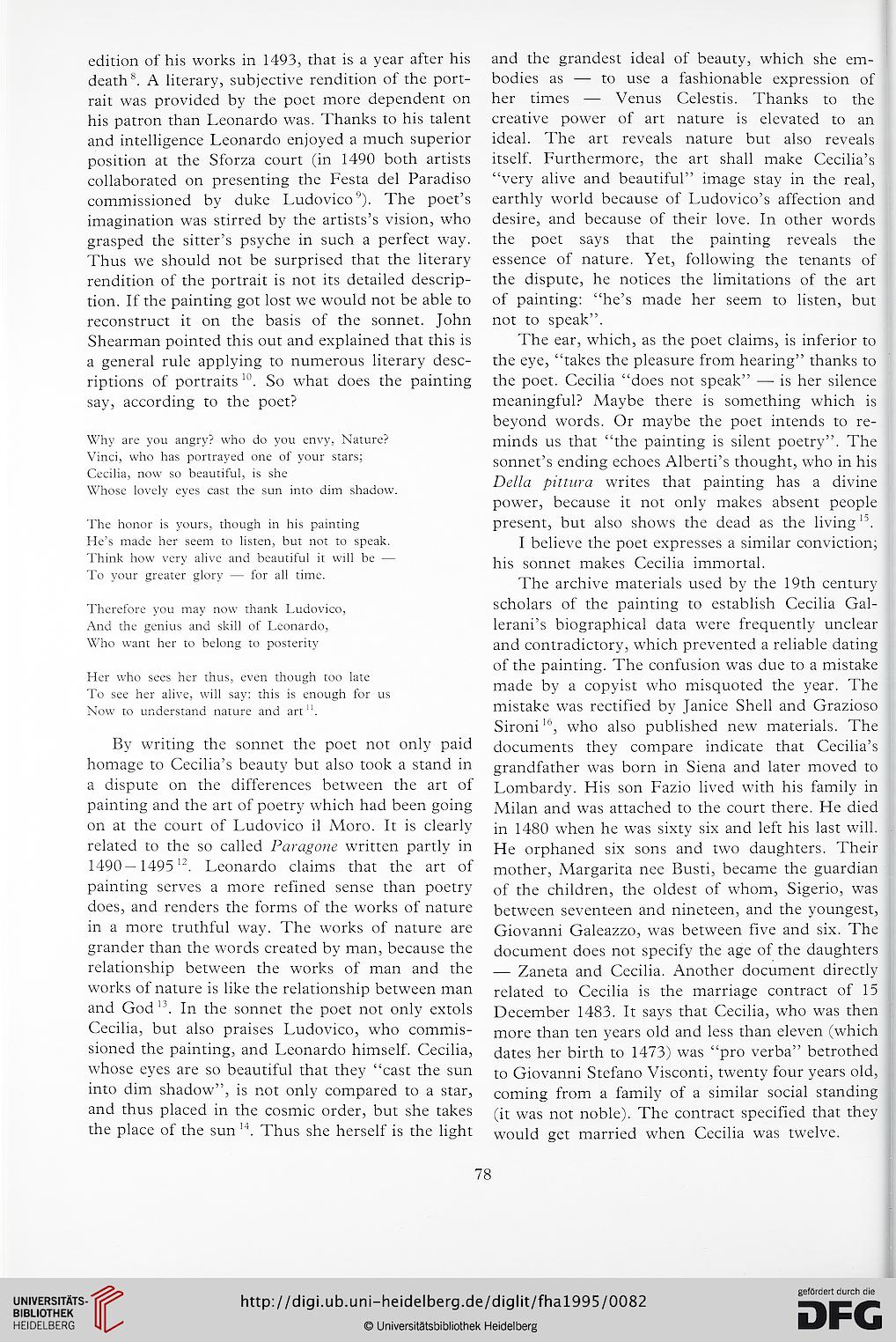 Information about OCR text
edition of his works in 1493, that is a year after his
death8. A literary, subjective rendition of the port-
rait was provided by the poet morę dependent on
his patron than Leonardo was. Thanks to his talent
and intelligence Leonardo enjoyed a much superior
position at the Sforza court (in 1490 both artists
collaborated on presenting the Festa del Paradiso
commissioned by duke Ludovico9). The poet’s
imagination was stirred by the artists’s vision, who
grasped the sitter’s psyche in such a perfect way.
Thus we should not be surprised that the literary
rendition of the portrait is not its detailed descrip-
tion. If the painting got lost we would not be able to
reconstruct it on the basis of the sonnet. John
Shearman pointed this out and explained that this is
a generał rule applying to numerous literary desc-
riptions of portraits 10. So what does the painting
say, according to the poet?

Why are you angry? who do you envy, Naturę?

Vinci, who has portrayed one of your stars;

Cecilia, now so beautiful, is she

Whose lovely eyes cast the sun into dim shadow.

The honor is yours, though in his painting
He’s madę her seem to listen, but not to speak.

Think how very alive and beautiful it will be —

To your greater glory — for all time.

Therefore you may now thank Ludovico,

And the genius and skill of Leonardo,

Who want her to belong to posterity

Her who sees her thus, even though too late
To see her alive, will say: this is enough for us
Now to understand naturę and art11.

By writing the sonnet the poet not only paid
homage to Cecilia’s beauty but also took a stand in
a dispute on the differences between the art of
painting and the art of poetry which had been going
on at the court of Ludovico il Moro. It is clearly
related to the so called Paragone written partly in
1490 — 149512. Leonardo claims that the art of
painting serves a morę refined sense than poetry
does, and renders the forms of the works of naturę
in a morę truthful way. The works of naturę are
grander than the words created by man, because the
relationship between the works of man and the
works of naturę is like the relationship between man
and God13. In the sonnet the poet not only extols
Cecilia, but also praises Ludovico, who commis-
sioned the painting, and Leonardo himself. Cecilia,
whose eyes are so beautiful that they “cast the sun
into dim shadow”, is not only compared to a star,
and thus placed in the cosmic order, but she takes
the place of the sun 14. Thus she herself is the light

and the grandest ideał of beauty, which she em-
bodies as — to use a fashionable expression of
her times — Venus Celestis. Thanks to the
creative power of art naturę is elevated to an
ideał. The art reveals naturę but also reveals
itself. Furthermore, the art shall make Cecilia’s
“very alive and beautiful” image stay in the real,
earthly world because of Ludovico’s affection and
desire, and because of their love. In other words
the poet says that the painting reveals the
essence of naturę. Yet, following the tenants of
the dispute, he notices the limitations of the art
of painting: “he’s madę her seem to listen, but
not to speak”.

The ear, which, as the poet claims, is inferior to
the eye, “takes the pleasure from hearing” thanks to
the poet. Cecilia “does not speak” — is her silence
meaningful? Maybe there is something which is
beyond words. Or maybe the poet intends to re-
minds us that “the painting is silent poetry”. The
sonnefs ending echoes Albertrs thought, who in his
Della pittura writes that painting has a divine
power, because it not only makes absent people
present, but also shows the dead as the living15.

I believe the poet expresses a similar conviction;
his sonnet makes Cecilia immortal.

The archive materials used by the 19th century
scholars of the painting to establish Cecilia Gal-
leranhs biographical data were freąuently unclear
and contradictory, which prevented a reliable dating
of the painting. The confusion was due to a mistake
madę by a copyist who misąuoted the year. The
mistake was rectified by Janice Shell and Grazioso
Sironi16, who also published new materials. The
documents they compare indicate that Cecilia’s
grandfather was born in Siena and later moved to
Lombardy. His son Fazio lived with his family in
Milan and was attached to the court there. He died
in 1480 when he was sixty six and left his last will.
He orphaned six sons and two daughters. Their
mother, Margarita nee Busti, became the guardian
of the children, the oldest of whom, Sigerio, was
between seventeen and nineteen, and the youngest,
Giovanni Galeazzo, was between five and six. The
document does not specify the age of the daughters
— Żaneta and Cecilia. Another document directly
related to Cecilia is the marriage contract of 15
December 1483. It says that Cecilia, who was then
morę than ten years old and less than eleven (which
dates her birth to 1473) was “pro verba” betrothed
to Giovanni Stefano Visconti, twenty four years old,
coming from a family of a similar social standing
(it was not noble). The contract specified that they
would get married when Cecilia was twelve.