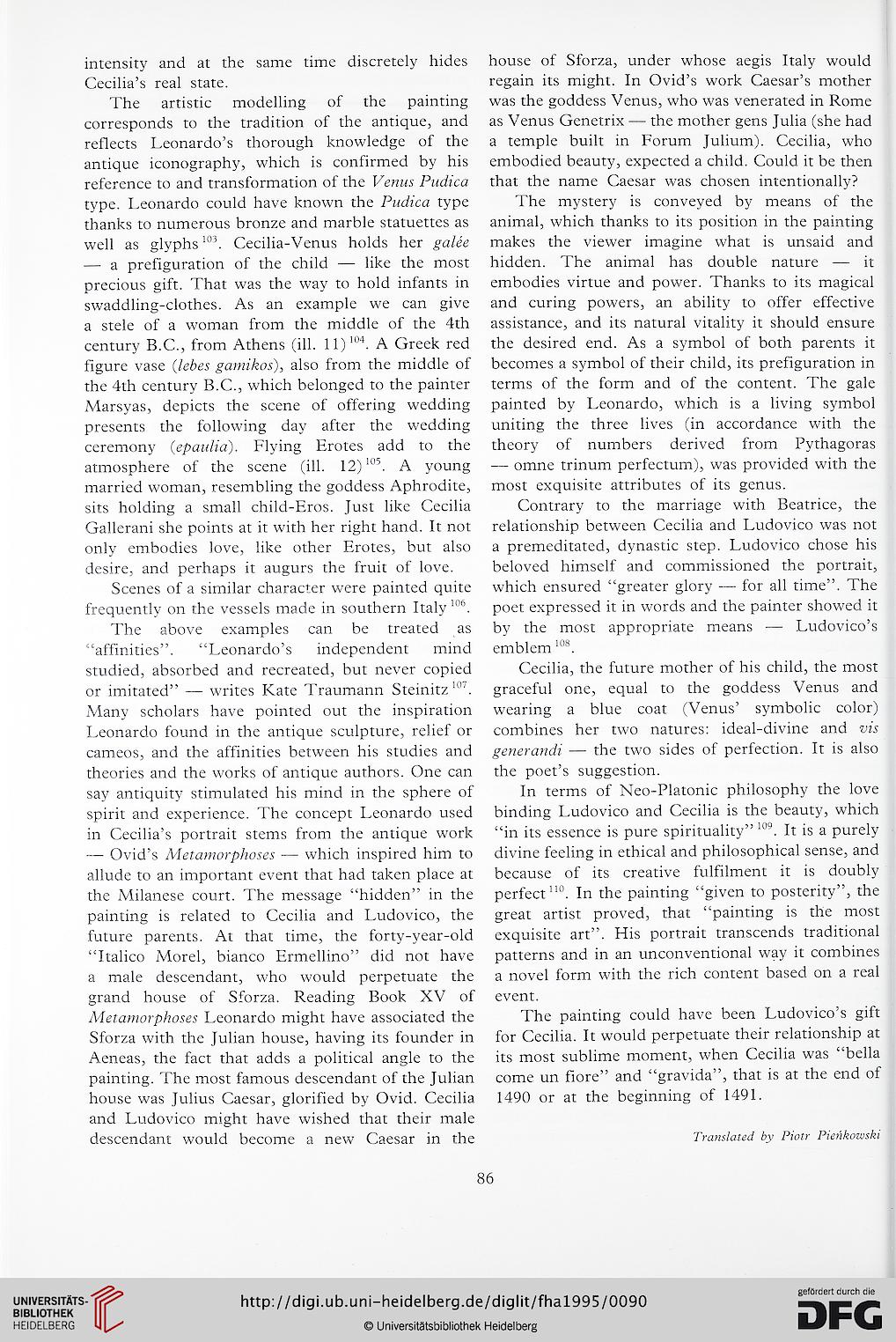 The artistic modelling of the painting
corresponds to the tradition of the antiąue, and
reflects Leonardo’s thorough knowledge of the
antiąue iconography, which is confirmed by his
reference to and transformation of the Venus Pudica
type. Leonardo could have known the Pudica type
thanks to numerous bronze and marble statuettes as
well as glyphs103. Cecilia-Venus holds her galee

— a prefiguration of the child — like the most
precious gift. That was the way to hołd infants in
swaddling~cloth.es. As an example we can give
a stele of a woman from the middle of the 4th
century B.C., from Athens (ill. II)104. A Greek red
figurę vase (lebes garnikos), also from the middle of
the 4th century B.C., which belonged to the painter
Marsyas, depicts the scene of offering wedding
presents the following day after the wedding
ceremony (epaulia). Flying Erotes add to the
atmosphere of the scene (ill. 12)105. A young
married woman, resembling the goddess Aphrodite,
sits holding a smali child-Eros. Just like Cecilia
Gallerani she points at it with her right hand. It not
only embodies love, like other Erotes, but also
desire, and perhaps it augurs the fruit of love.

Scenes of a similar character were painted ąuite
freąuently on the vessels madę in Southern Italy 106.

The above examples can be treated as
“affinities”. “Leonardo’s independent mind
studied, absorbed and recreated, but never copied
or imitated” — writes Kate Traumann Steinitz10/.
Many scholars have pointed out the inspiration
Leonardo found in the antiąue sculpture, relief or
cameos, and the affinities between his studies and
theories and the works of antiąue authors. One can
say antiąuity stimulated his mind in the sphere of
spirit and experience. The concept Leonardo used
in Cecilia’s portrait stems from the antiąue work

— Ovid’s Metamorphoses — which inspired him to
allude to an important event that had taken place at
the Milanese court. The message “hidden” in the
painting is related to Cecilia and Ludovico, the
futurę parents. At that time, the forty-year-old
“Italico Morel, bianco Ermellino” did not have
a małe descendant, who would perpetuate the
grand house of Sforza. Reading Book XV of
Metamorphoses Leonardo might have associated the
Sforza with the Julian house, having its founder in
Aeneas, the fact that adds a political angle to the
painting. The most famous descendant of the Julian
house was Julius Caesar, glorified by Ovid. Cecilia
and Ludovico might have wished that their małe
descendant would become a new Caesar in the

house of Sforza, under whose aegis Italy would
regain its might. In Ovid’s work Caesar’s mother
was the goddess Venus, who was venerated in Romę
as Venus Genetrix — the mother gens Julia (she had
a tempie built in Forum Julium). Cecilia, who
embodied beauty, expected a child. Could it be then
that the name Caesar was chosen intentionally?

The mystery is conveyed by means of the
animal, which thanks to its position in the painting
makes the viewer imagine what is unsaid and
hidden. The animal has double naturę — it
embodies virtue and power. Thanks to its magical
and curing powers, an ability to offer effective
assistance, and its natural vitali.ty it should ensure
the desired end. As a symbol of both parents it
becomes a symbol of their child, its prefiguration in
terms of the form and of the content. The gale
painted by Leonardo, which is a living symbol
uniting the three lives (in accordance with the
theory of numbers derived from Pythagoras
— omne trinum perfectum), was provided with the
most exquisite attributes of its genus.

Contrary to the marriage with Beatrice, the
relationship between Cecilia and Ludovico was not
a premeditated, dynastie step. Ludovico chose his
beloved himself and commissioned the portrait,
which ensured “greater glory — for all time”. The
poet expressed it in words and the painter showed it
by the most appropriate means — Ludovico’s
emblem 108.

Cecilia, the futurę mother of his child, the most
graceful one, eąual to the goddess Venus and
wearing a blue coat (Venus’ symbolic color)
combines her two natures: ideal-divine and vis
generandi — the two sides of perfection. It is also
the poet’s suggestion.

In terms of Neo-Platonic philosophy the love
binding Ludovico and Cecilia is the beauty, which
“in its essence is pure spirituality” 109. It is a purely
divine feeling in ethical and philosophical sense, and
because of its creative fulfilment it is doubly
perfect110. In the painting “given to posterity”, the
great artist proved, that “painting is the most
exquisite art”. His portrait transcends traditional
patterns and in an unconventional way it combines
a novel form with the rich content based. on a real
event.

The painting could have been Ludovico’s gift
for Cecilia. It would perpetuate their relationship at
its most sublime moment, when Cecilia was “bella
come un fiore” and “gravida”, that is at the end of
1490 or at the beginning of 1491.