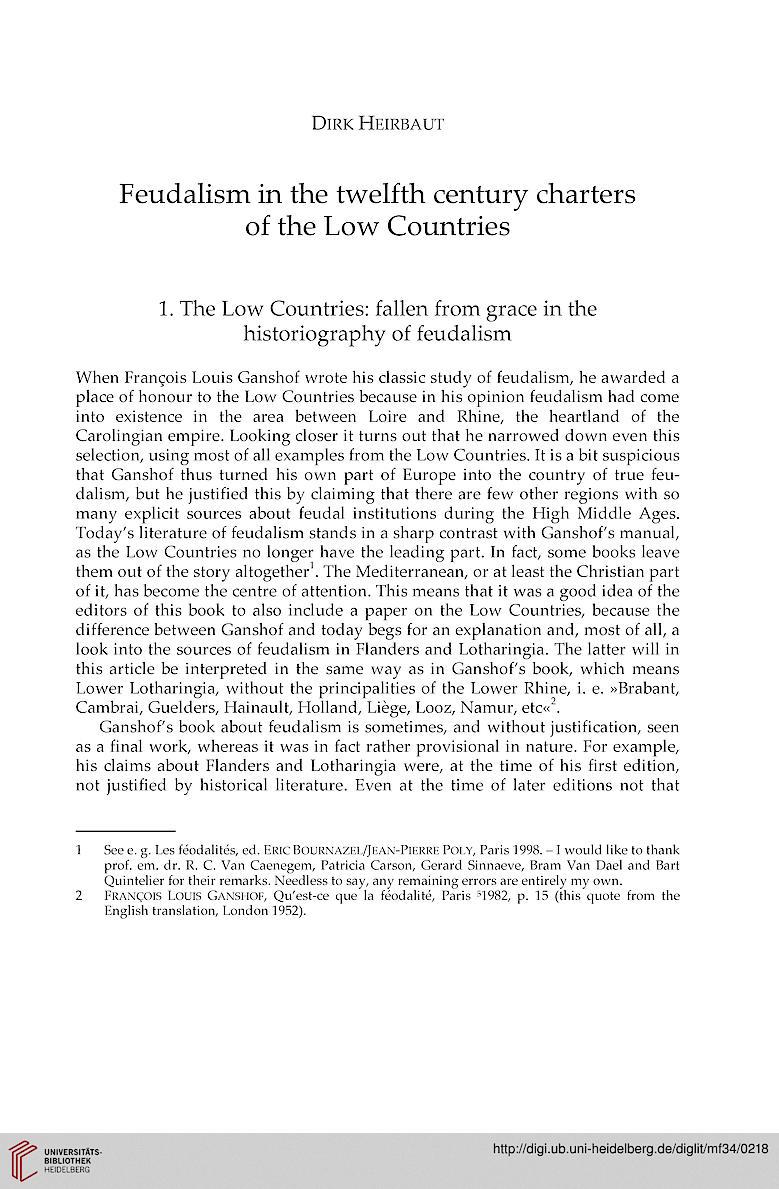 Feudalism in the twelfth century charters
of the Low Countries

1. The Low Countries: fallen from grace in the
historiography of feudalism
When François Louis Ganshof wrote his classic study of feudalism, he awarded a
place of honour to the Low Countries because in his opinion feudalism had come
into existence in the area between Loire and Rhine, the heartland of the
Carolingian empire. Looking closer it turns out that he narrowed down even this
selection, using most of all examples from the Low Countries. It is a bit suspicious
that Ganshof thus turned his own part of Europe into the country of true feu-
dalism, but he justified this by claiming that there are few other regions with so
many explicit sources about feudal institutions during the High Middle Ages.
Today's literature of feudalism stands in a sharp contrast with Ganshof's manual,
as the Low Countries no longer have the leading part. In fact, some books leave
them out of the story altogether1. The Mediterranean, or at least the Christian part
of it, has become the centre of attention. This means that it was a good idea of the
editors of this book to also include a paper on the Low Countries, because the
difference between Ganshof and today begs for an explanation and, most of all, a
look into the sources of feudalism in Flanders and Lotharingia. The latter will in
this article be interpreted in the same way as in Ganshof's book, which means
Lower Lotharingia, without the principalities of the Lower Rhine, i. e. »Brabant,
Cambrai, Guelders, Hainault, Holland, Liège, Looz, Namur, etc«2 *.
Ganshof's book about feudalism is sometimes, and without justification, seen
as a final work, whereas it was in fact rather provisional in nature. For example,
his claims about Flanders and Lotharingia were, at the time of his first edition,
not justified by historical literature. Even at the time of later editions not that