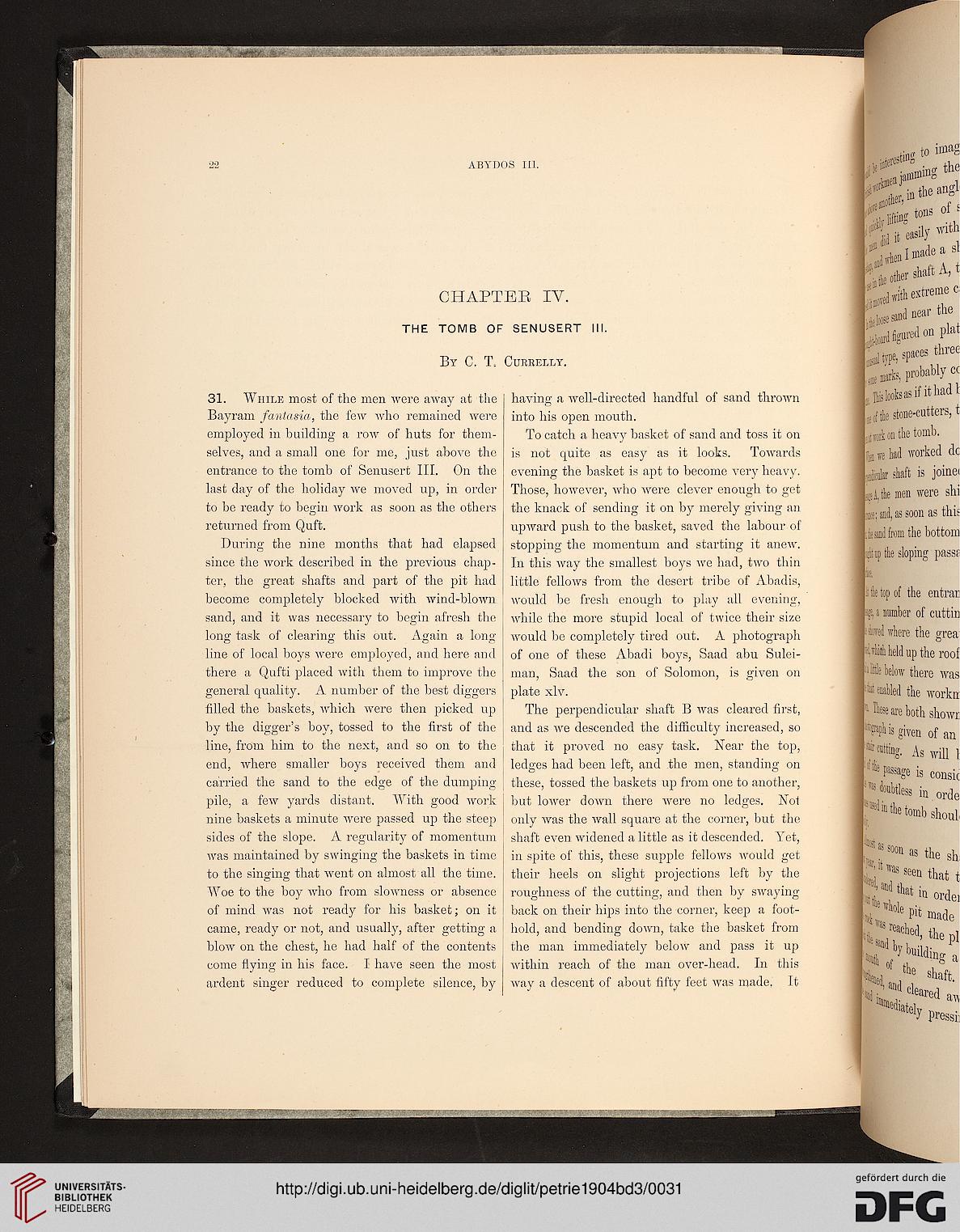 THE TOMB OF SENUSERT III.

31. While most of the men were away at the
Bayram fantasia, the few who remained were
employed in building a row of huts for them-
selves, and a small one for me, just above the
entrance to the tomb of Senusert III. On the
last day of the holiday we moved up, in order
to be ready to begin work as soon as the others
returned from Quft.

During the nine months that had elapsed
since the work described in the previous chap-
ter, the great shafts and part of the pit had
become completely blocked with wind-blown
sand, and it was necessary to begin afresh the
long task of clearing this out. Again a long
line of local boys were employed, and here and
there a Qufti placed with them to improve the
general quality. A number of the best diggers
filled the baskets, which were then picked up
by the digger's boy, tossed to the first of the
line, from him to the next, and so on to the
end, where smaller boys received them and
carried the sand to the edge of the dumping
pile, a few yards distant. With good work
nine baskets a minute were passed up the steep
sides of the slope. A regularity of momentum
was maintained by swinging the baskets in time
to the singing that went on almost all the time.
Woe to the boy who from slowness or absence
of mind was not ready for his basket; on it
came, ready or not, and usually, after getting a
blow on the chest, he had half of the contents
come flying in his face. I have seen the most
ardent singer reduced to complete silence, by

having a well-directed handful of sand thrown
into his open mouth.

To catch a heavy basket of sand and toss it on
is not quite as easy as it looks. Towards
evening the basket is apt to become very heavy.
Those, however, who were clever enough to get
the knack of sending it on by merely giving an
upward push to the basket, saved the labour of
stopping the momentum and starting it anew.
In this way the smallest boys we had, two thin
little fellows from the desert tribe of Abadis,
would be fresh enough to play all evening,
while the more stupid local of twice their size
would be completely tired out. A photograph
of one of these Abadi boys, Saad abu Sulei-
man, Saad the son of Solomon, is given on
plate xlv.

The perpendicular shaft B was cleared first,
and as we descended the difficulty increased, so
that it proved no easy task. Near the top,
ledges had been left, and the men, standing on
these, tossed the baskets up from one to another,
but lower down there were no ledges. Not
only was the wall square at the corner, but the
shaft even widened a little as it descended. Yet,
in spite of this, these supple fellows Avould get
their heels on slight projections left by the
roughness of the cutting, and then by swaying
back on their hips into the corner, keep a foot-
hold, and bending down, take the basket from
the man immediately below and pass it up
Avithin reach of the man over-head. In this
way a descent of about fifty feet was made. It

pother shaft A, t
11 ,d with extreme c;
^esand near the
M,oardfigureclon plat

,His looks as if it had t
Lf the stone-cutters, t
Lorbn the tomb.

e had worked dc
5,icular shaft is joinei
sage A, tlie men were slii
is; and, as soon as this
[fesand from the bottom
the sloping pass?