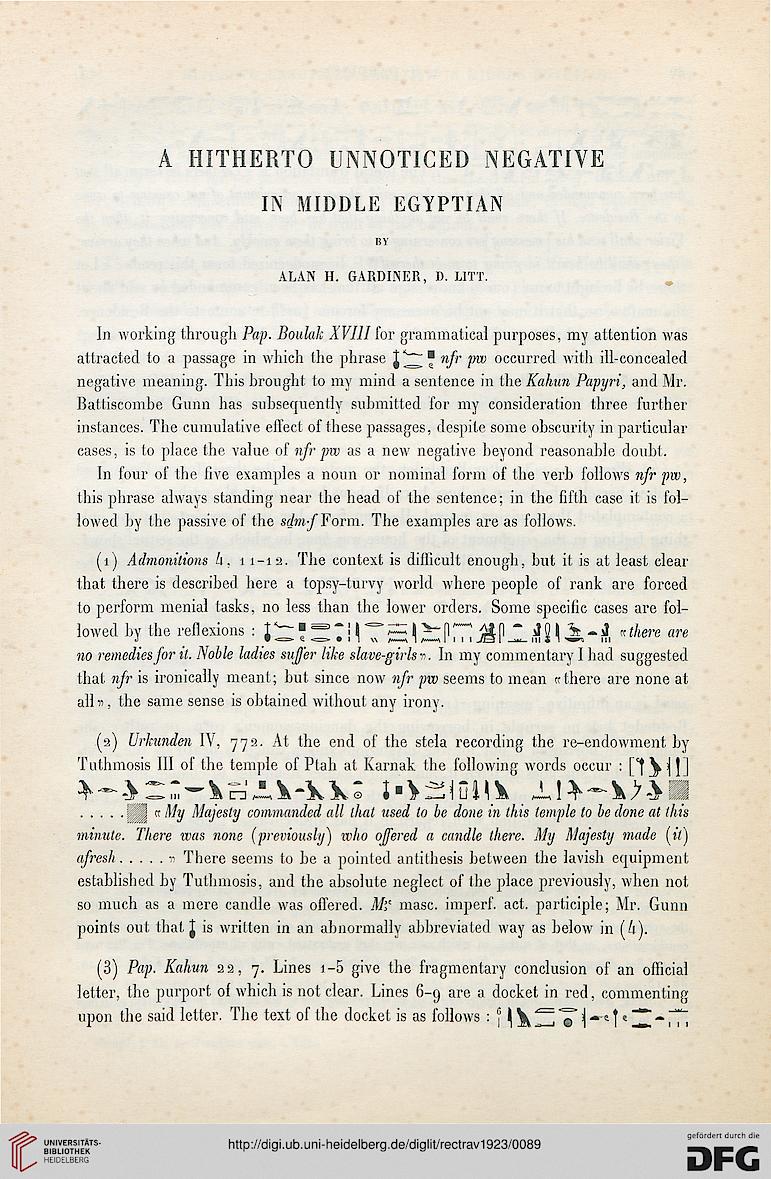 In working through Pap. Boulak XVIII for grammatical purposes, my attention was
attracted to a passage in which the phrase nfr pw occurred with ill-concealed

négative meaning. Tins brought to my mind a sentence in the Kahun Papyri, and Mr.
Battiscombe Gunn has siihsequently submitted for my considération three further
instances. The cumulative effect of thèse passages, despite some obscurity in particular
cases, is to place the value of nfr pw as a new négative heyond reasonable doubt.

In four of the five examples a noun or nominal form of the verb follows nfr pw,
this phrase always standing near the head of the sentence; in the fifth case it is fol-
lowed by the passive of the sdm-fForm. The examples are as follows.

(1) Admonitions h. 1 The context is ditlicult enough, but it is at least clear
that there is described here a topsy-turvy world where people of rank are forced
to perform menial tasks, no less than the lower orders. Some spécifie cases are fol-
lowed by the reflexions : J ^ ■ — ; \\ ^ ^ \j£ p ~ p _^ J g \% - J « there are
no remédies for it. Noble ladies sufj'er ïike slave-girlsr. In my commentary I had suggested
that nfr is ironically meant; but since now nfr pw seems to mean «there are none at
ail r», the same sensé is obtained without any irony.

(2) Urkunden IV, 772. At the end of the stela recording the re-endowment by
Tuthmosis III of the temple of Ptah at Karnak the following words occur : ^ \ j]

.....Hj « My Majesly commanded ail that used to be done in this temple to be donc at tins

minute. There was none (previously) who ojfered a candie there. My Majesty made (il)

afresh.....n There seems to be a pointed antithesis between the lavish equipment

established by Tuthmosis, and the absolule neglect of the place previously, when not
so much as a mere candie was offered. M? masc. imperf. act. participle; Mr. Gunn
points out that J is written in an abnormally abbreviated way as below in (4).