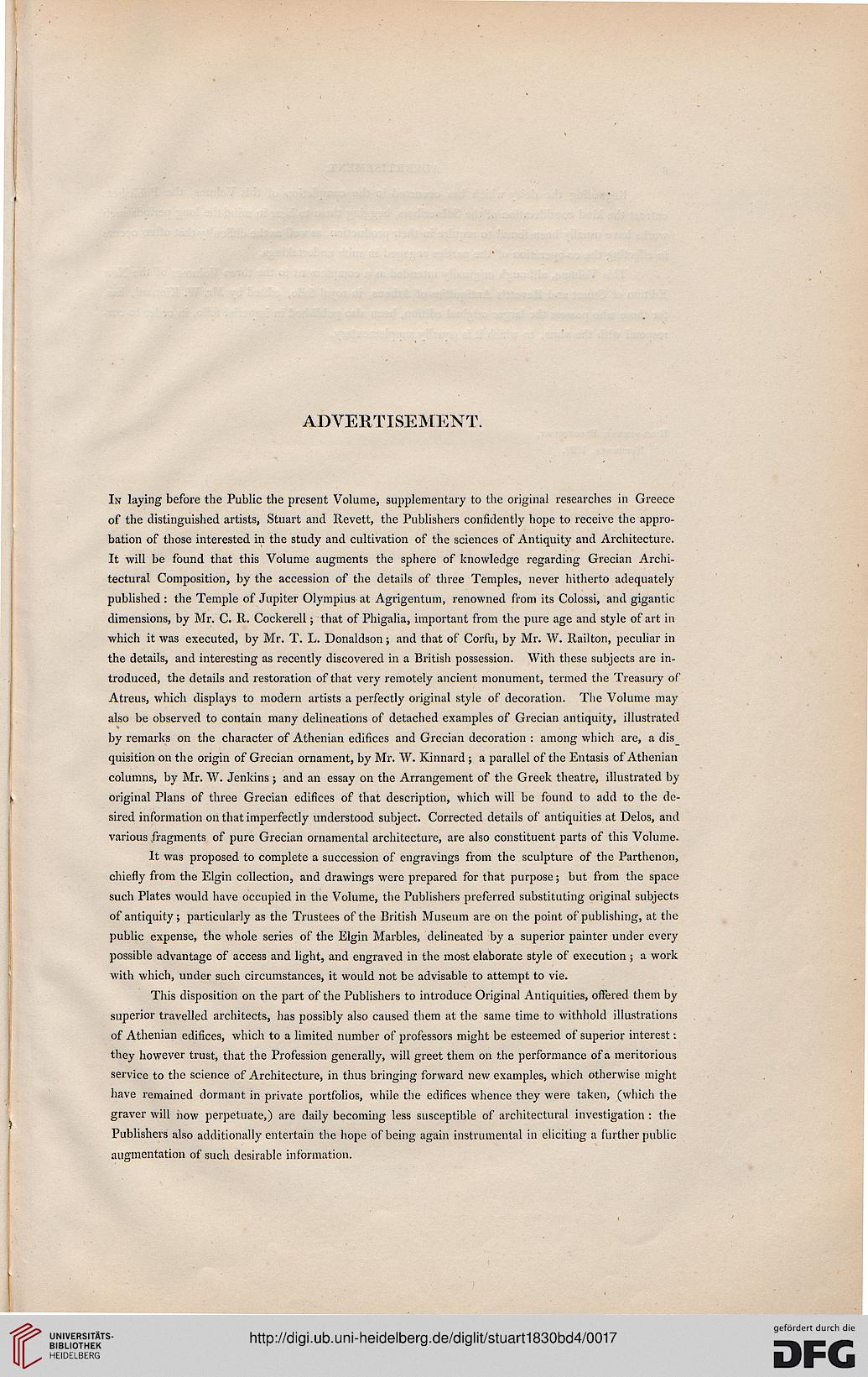 In laying before the Public the present Volume, supplementary to the original researches in Greece
of the distinguished artists, Stuart and Itevett, the Publishers confidently hope to receive the appro-
bation of those interested in the study and cultivation of the sciences of Antiquity and Architecture.
It will be found that this Volume augments the sphere of knowledge regarding Grecian Archi-
tectural Composition, by the accession of the details of three Temples, never hitherto adequately
published : the Temple of Jupiter Olympius at Agrigentum, renowned from its Colossi, and gigantic
dimensions, by Mr. C. R. Cockerell; that of Phigalia, important from the pure age and style of art in
which it was executed, by Mr. T. L. Donaldson; and that of Corfu, by Mr. W. Railton, peculiar in
the details, and interesting as recently discovered in a British possession. With these subjects are in-
troduced, the details and restoration of that very remotely ancient monument, termed the Treasury of
Atreus, which displays to modern artists a perfectly original style of decoration. The Volume may
also be observed to contain many delineations of detached examples of Grecian antiquity, illustrated
by remarks on the character of Athenian edifices and Grecian decoration : among which are, a dis
quisition on the origin of Grecian ornament, by Mr. W. Kinnard ; a parallel of the Entasis of Athenian
columns, by Mr. W. Jenkins ; and an essay on the Arrangement of the Greek theatre, illustrated by
original Plans of three Grecian edifices of that description, which will be found to add to the de-
sired information on that imperfectly understood subject. Corrected details of antiquities at Delos, and
various fragments of pure Grecian ornamental architecture, are also constituent parts of this Volume.

It was proposed to complete a succession of engravings from the sculpture of the Parthenon,
chiefly from the Elgin collection, and drawings were prepared for that purpose; but from the space
such Plates would have occupied in the Volume, the Publishers preferred substituting original subjects
of antiquity; particularly as the Trustees of the British Museum are on the point of publishing, at the
public expense, the whole series of the Elgin Marbles, delineated by a superior painter under every
possible advantage of access and light, and engraved in the most elaborate style of execution ; a work
with which, under such circumstances, it would not be advisable to attempt to vie.

This disposition on the part of the Publishers to introduce Original Antiquities, offered them by
superior travelled architects, has possibly also caused them at the same time to withhold illustrations
of Athenian edifices, which to a limited number of professors might be esteemed of superior interest:
they however trust, that the Profession generally, will greet them on the performance of a meritorious
service to the science of Architecture, in thus bringing forward new examples, which otherwise might
have remained dormant in private portfolios, while the edifices whence they were taken, (which the
graver will now perpetuate,) are daily becoming less susceptible of architectural investigation : the
Publishers also additionally entertain the hope of being again instrumental in eliciting a further public
augmentation of such desirable information.