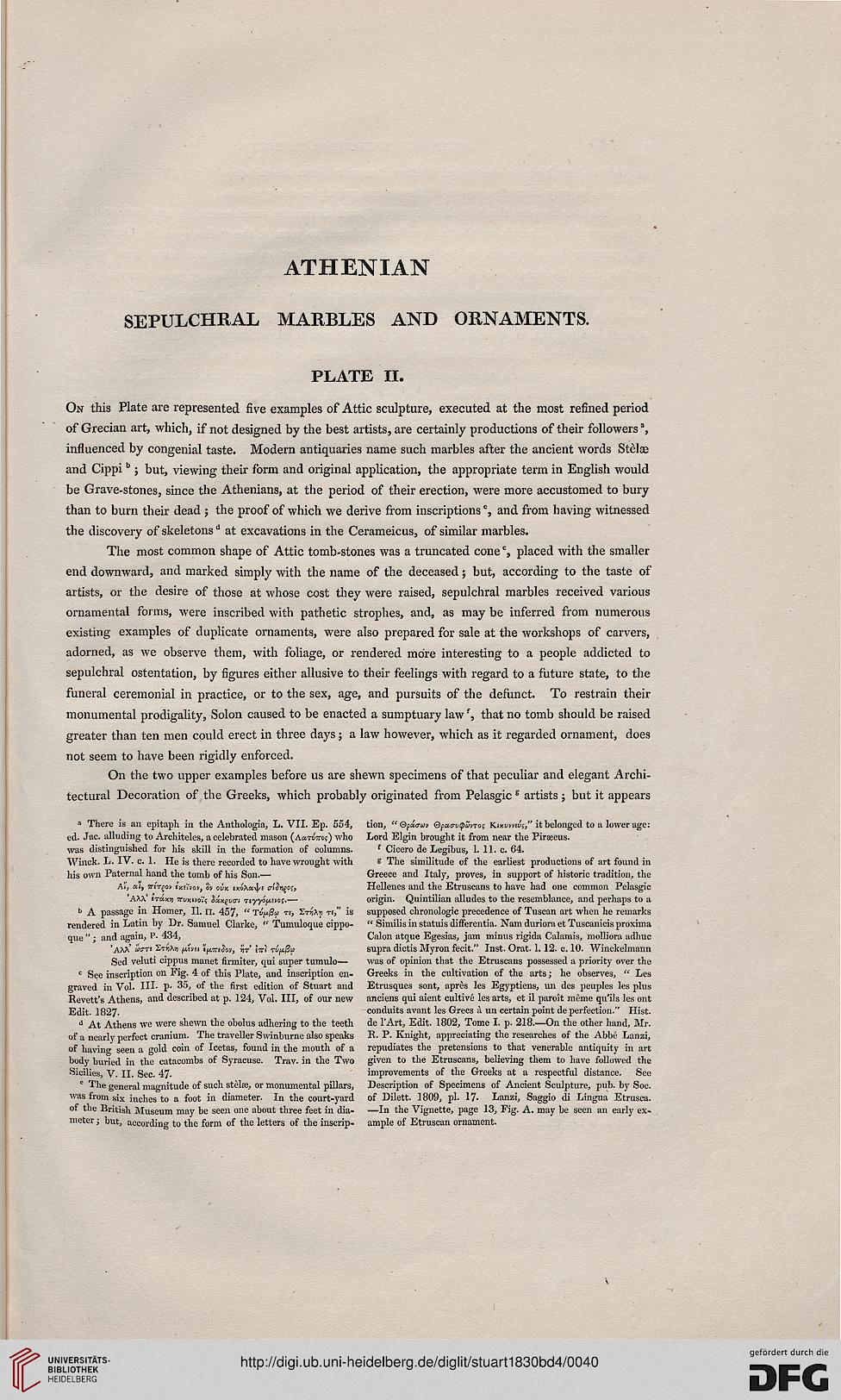 On this Plate are represented five examples of Attic sculpture, executed at the most refined period
of Grecian art, which, if not designed by the best artists, are certainly productions of their followers %
influenced by congenial taste. Modern antiquaries name such marbles after the ancient words Stelce
and Cippi b ; but, viewing their form and original application, the appropriate term in English would
be Grave-stones, since the Athenians, at the period of their erection, were more accustomed to bury
than to burn their dead ; the proof of which we derive from inscriptions % and from having witnessed
the discovery of skeletons d at excavations in the Cerameicus, of similar marbles.

The most common shape of Attic tomb-stones was a truncated cone % placed with the smaller
end downward, and marked simply with the name of the deceased j but, according to the taste of
artists, or the desire of those at whose cost they were raised, sepulchral marbles received various
ornamental forms, were inscribed with pathetic strophes, and, as may be inferred from numerous
existing examples of duplicate ornaments, were also prepared for sale at the workshops of carvers,
adorned, as we observe them, with foliage, or rendered more interesting to a people addicted to
sepulchral ostentation, by figures either allusive to their feelings with regard to a future state, to the
funeral ceremonial in practice, or to the sex, age, and pursuits of the defunct. To restrain their
monumental prodigality, Solon caused to be enacted a sumptuary lawf, that no tomb should be raised
greater than ten men could erect in three days ; a law however, which as it regarded ornament, does
not seem to have been rigidly enforced.

On the two upper examples before us are shewn specimens of that peculiar and elegant Archi-
tectural Decoration of the Greeks, which probably originated from Pelasgic s artists ; but it appears

a There is an epitaph in the Anthologia, L. VII. Ep. 554,
ed. Jac. alluding to Architeles, a celebrated mason (Aaiwo;) who
was distinguished for his skill in the formation of columns.
Winck. L. IV. c. 1. He is there recorded to have wrought with
his own Paternal hand the tomb of his Son.—

Sed veluti cippus manet firmiter, qui super tumulo—
c See inscription on Fig. 4 of this Plate, and inscription en-
graved in Vol. HI- P> 35, of the first edition of Stuart and
Revett's Athens, and described at p. 124, Vol. Ill, of our new
Edit. 1827.

a At Athens we were shewn the obolus adhering to the teeth
of a nearly perfect cranium. The traveller Swinburne also speaks
of having seen a gold coin of Icetas, found in the mouth of a
body buried in the catacombs of Syracuse. Trav. in the Two
Sicilies, V. II. Sec. 47-

e The general magnitude of such stelee, or monumental pillars,
was from six inches to a foot in diameter. In the court-yard
of the British Museum may be seen one about three feet in dia-
meter ; but, according to the form of the letters of the inscrip-

s The similitude of the earliest productions of art found in
Greece and Italy, proves, in support of historic tradition, the
Hellenes and the Etruscans to have had one common Pelasgic
origin. Quintilian alludes to the resemblance, and perhaps to a
supposed chronologic precedence of Tuscan art when he remarks
" Similis in statuis differentia. Nam duriora et Tuscanicis proxima
Calon atque Egesias, jam minus rigida Calamis, molliora adhuc
supra dictis Myron fecit." Inst. Orat. 1.12. c. 10. Winckelmann
was of opinion that the Etruscans possessed a priority over the
Greeks in the cultivation of the arts; he observes, " Les
Etrusques sont, apres les Egyptiens, un des peuples les plus
anciens qui aient cultive les arts, et il paroit meme qu'ils les ont
conduits avant les Grecs a un certain point de perfection." Hist,
de TArt, Edit. 1802, Tome I. p. 218.—On the other hand, Mr.
Pi. P. Knight, appreciating the researches of the Abbe Lanzi,
repudiates the pretensions to that venerable antiquity in art
given to the Etruscans, believing them to have followed the
improvements of the Greeks at a respectful distance. See
Description of Specimens of Ancient Sculpture, pub. by Soc.
of Dilett. 1809, pi. 17- Lanzi, Saggio di Lingua Etrusca.
—In the Vignette, page 13, Fig. A. may be seen an early ex-
ample of Etruscan ornament.