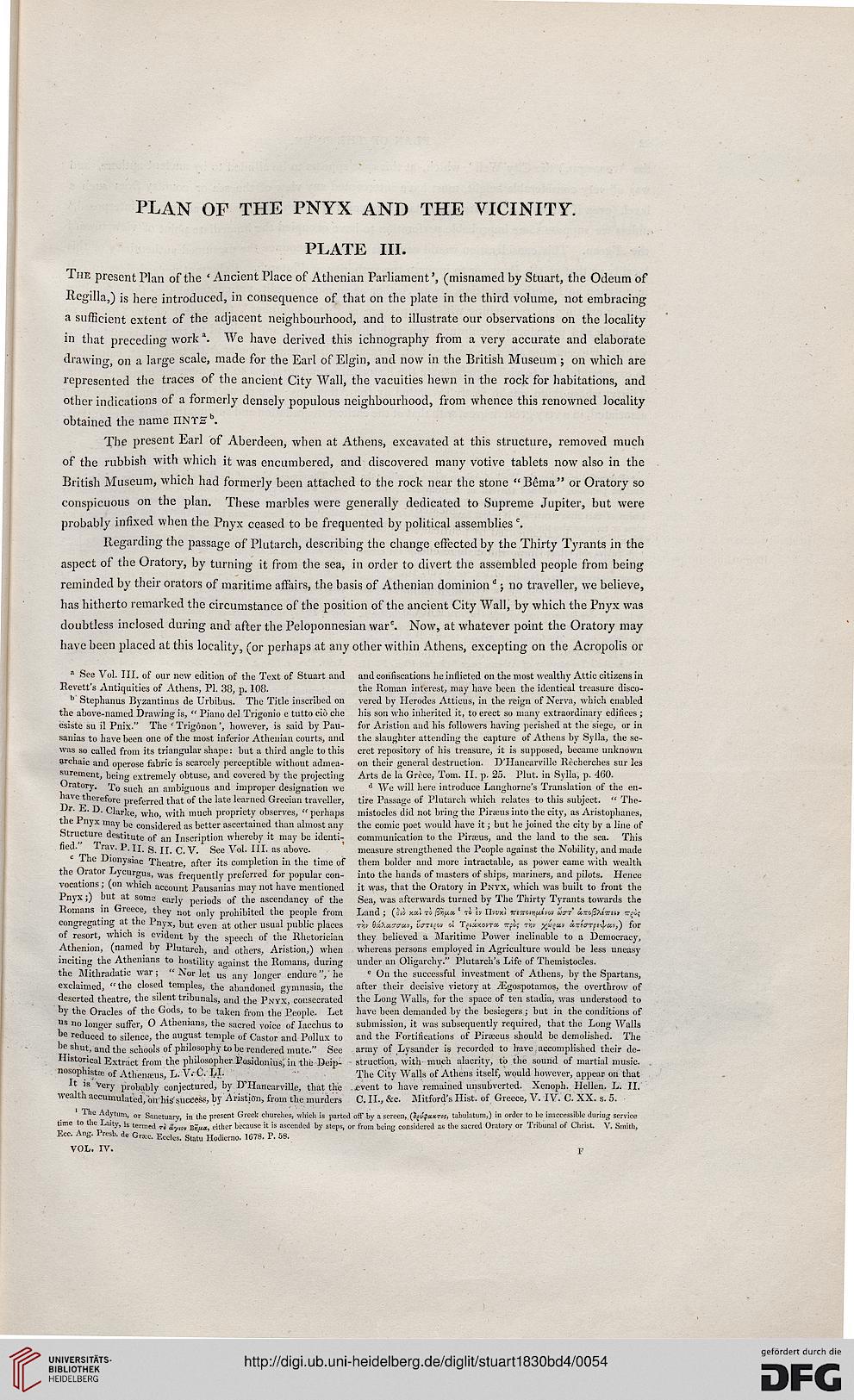 Scroll
OCR fulltext
Information about OCR text
PLAN OF THE PNYX AND THE VICINITY.

The present Plan of the ' Ancient Place of Athenian Parliament', (misnamed by Stuart, the Odeum of
Regilla,) is here introduced, in consequence of that on the plate in the third volume, not embracing
a sufficient extent of the adjacent neighbourhood, and to illustrate our observations on the locality
in that preceding work \ We have derived this ichnography from a very accurate and elaborate
drawing, on a large scale, made for the Earl of Elgin, and now in the British Museum ; on which are
represented the traces of the ancient City Wall, the vacuities hewn in the rock for habitations, and
other indications of a formerly densely populous neighbourhood, from whence this renowned locality
obtained the name IINTS".

The present Earl of Aberdeen, when at Athens, excavated at this structure, removed much
of the rubbish with which it was encumbered, and discovered many votive tablets now also in the
British Museum, which had formerly been attached to the rock near the stone "Bema" or Oratory so
conspicuous on the plan. These marbles were generally dedicated to Supreme Jupiter, but were
probably infixed when the Pnyx ceased to be frequented by political assemblies c.

Regarding the passage of Plutarch, describing the change effected by the Thirty Tyrants in the
aspect of the Oratory, by turning it from the sea, in order to divert the assembled people from being
reminded by their orators of maritime affairs, the basis of Athenian dominiond; no traveller, we believe,
has hitherto remarked the circumstance of the position of the ancient City Wall, by which the Pnyx was
doubtless inclosed during and after the Peloponnesian ware. Now, at whatever point the Oratory may
have been placed at this locality, (or perhaps at any other within Athens, excepting on the Acropolis or

a See Vol. III. of our new edition of the Text of Stuart and and confiscations he inflicted on the most wealthy Attic citizens in

Revett's Antiquities of Athens, PI. 38, p. 108. the Roman interest, may have been the identical treasure disco-

b Stephanus Byzantinus de Urbibus. The Title inscribed on vered by Ilerodes Atticus, in the reign of Nerva, which enabled

the above-named Drawing is, " Piano del Trigonio e tutto cio che bis son who inherited it, to erect so many extraordinary edifices ;

esiste su il Pnix." The (Trigonon', however, is said by Pau- for Aristion and his followers having perished at the siege, or in

sanias to have been one of the most inferior Athenian courts, and the slaughter attending the capture of Athens by Sylla, the se-

was so called from its triangular shape: but a third angle to this cret repository of his treasure, it is supposed, became unknown

Oratory, fo such an ambiguous and improper designation we d We will here introduce Langhorne's Translation of the en-

navc therefore preferred that of the late learned Grecian traveller, tire Passage of Plutarch which relates to this subject. " The-

r- -£■• D. Clarke, who, with much propriety observes, " perhaps mistocles did not bring the Piraeus into the city, as Aristophanes,

t le ir"nyx may be considered as better ascertained than almost any the comic poet would have it; but he joined the city by a line of

btructure destitute of an Inscription whereby it may be identi- communication to the Piraeus, and the land to the sea. This

onysiac Theatre, after its completion in the time of them bolder and more intractable, as power came with wealth

the Orator -L<ycurgus, was frequently preferred for popular con- into the hands of masters of ships, mariners, and jnlots. Hence

vocations; (on which account Pausanias may not have mentioned it was, that the Oratory in Pnyx, which was built to front the

Pnyx ;) but at soma early periods of the ascendancy of the Sea, was afterwards turned by The Thirty Tyrants towards the

of resort, which is evident by the speech of the Rhetorician they believed a Maritime Power inclinable to a Democracy,

Athenion, (named by Plutarch, and others, Aristion,) when whereas persons employed in Agriculture would be less uneasy

inciting the Athenians to hostility against the Romans, during under an Oligarchy." Plutarch's Life of Themistocles.

the Mithradatic war ; " Nor let us any longer endure ", he e On the successful investment of Athens, by the Spartans,

exclaimed, " the closed temples, the abandoned gymnasia, the after their decisive victory at iEgospotamos, the overthrow of

deserted theatre, the silent tribunals, and the Pnyx, consecrated the Long Walls, for the space of ten stadia, was understood to

hy the Oracles of the Gods, to be taken from the People. Let have been demanded by the besiegers; but in the conditions of

us no longer suffer, O Athenians, the sacred voice of Iacchus to submission, it was subsequently required, that the Long Walls

be reduced to silence, the august temple of Castor and Pollux to and the Fortifications of Piraeeus should be demolished. The

be shut, and the schools of philosophy to be rendered mute." See army of Lysander is recorded to have.. accomplished their de-

Historical Extract from the philosopher Posidonius, in the Deip- struction, with much alacrity, to the sound of martial music. .

nosophiste of Athenaeus, L. V.-'C. LI. The City Walls of Athens itself, would however, appear on that

Adytum, or Sanctuary, in the present Greek churches, which is parted off by a screen,, {ifufxxres, tabulatum,) in order to be inaccessible during service
time to the Laity, is termed to Hym V,n/M, either because it is ascended by steps, or from being considered as the sacred Oratory or Tribunal of Christ. V. Smith,
Ecc. Aug. Presb. de Gnec. Eccles. Statu Hodierno. 1078. P. 58.