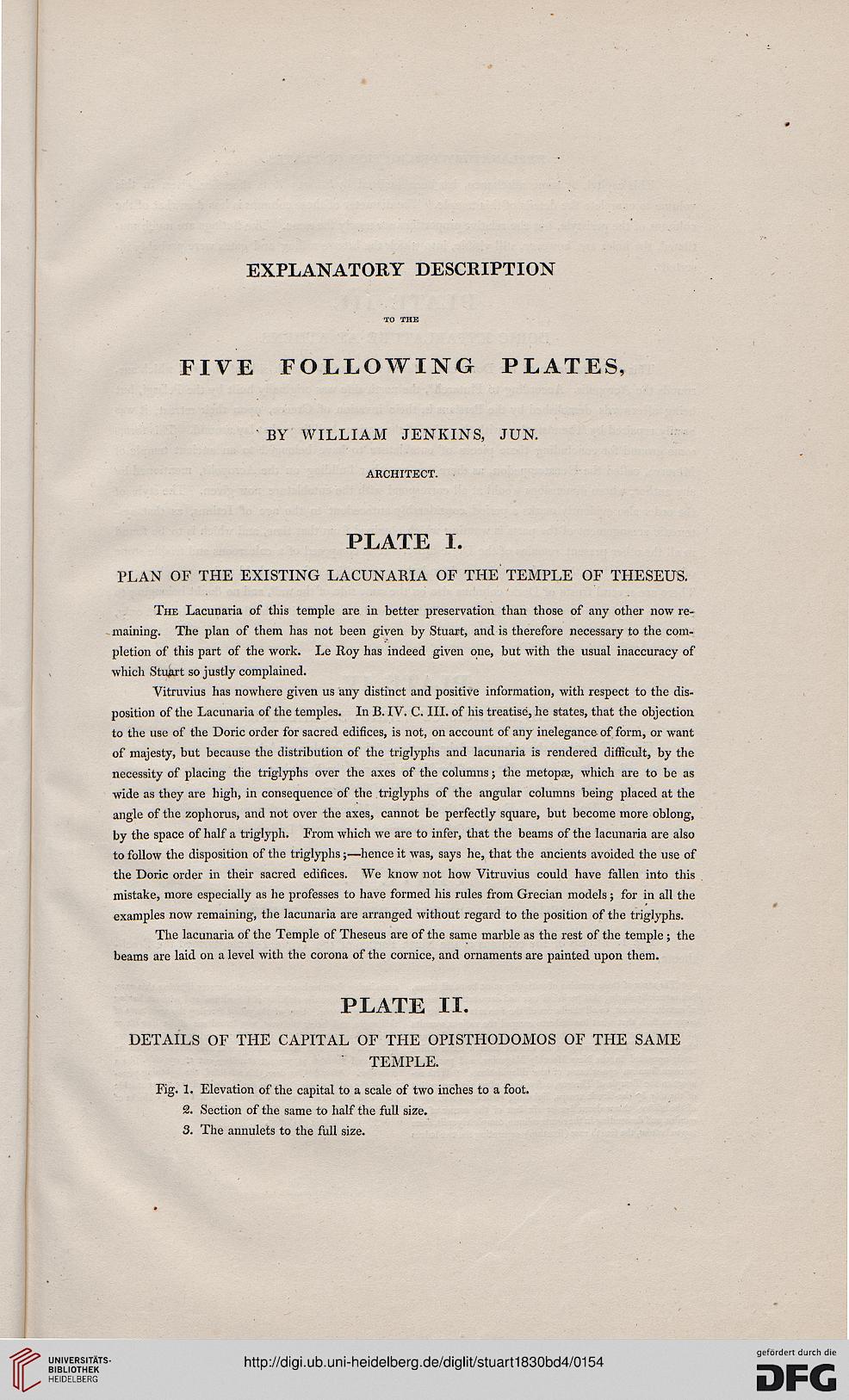 PLAN OF THE EXISTING LACUNARIA OF THE TEMPLE OF THESEUS.

The Lacunaria of this temple are in better preservation than those of any other now re-
maining. The plan of them has not been given by Stuart, and is therefore necessary to the com-
pletion of this part of the work. Le Roy has indeed given one, but with the usual inaccuracy of
whicli Stuart so justly complained.

Vitruvius has nowhere given us any distinct and positive information, with respect to the dis-
position of the Lacunaria of the temples. In B. IV. C. III. of his treatise, he states, that the objection
to the use of the Doric order for sacred edifices, is not, on account of any inelegance of form, or want
of majesty, but because the distribution of the triglyphs and lacunaria is rendered difficult, by the
necessity of placing the triglyphs over the axes of the columns; the metopas, which are to be as
wide as they are high, in consequence of the triglyphs of the angular columns being placed at the
angle of the zophorus, and not over the axes, cannot be perfectly square, but become more oblong,
by the space of half a triglyph. From which we are to infer, that the beams of the lacunaria are also
to follow the disposition of the triglyphs ;—hence it was, says he, that the ancients avoided the use of
the Doric order in their sacred edifices. We know not how Vitruvius could have fallen into this
mistake, more especially as he professes to have formed his rules from Grecian models ; for in all the
examples now remaining, the lacunaria are arranged without regard to the position of the triglyphs.

The lacunaria of the Temple of Theseus are of the same marble as the rest of the temple ; the
beams are laid on a level with the corona of the cornice, and ornaments are painted upon them.

DETAILS OF THE CAPITAL OF THE OPISTHODOMOS OF THE SAME

Fig. 1. Elevation of the capital to a scale of two inches to a foot.

2. Section of the same to half the full size.

3. The annulets to the full size.