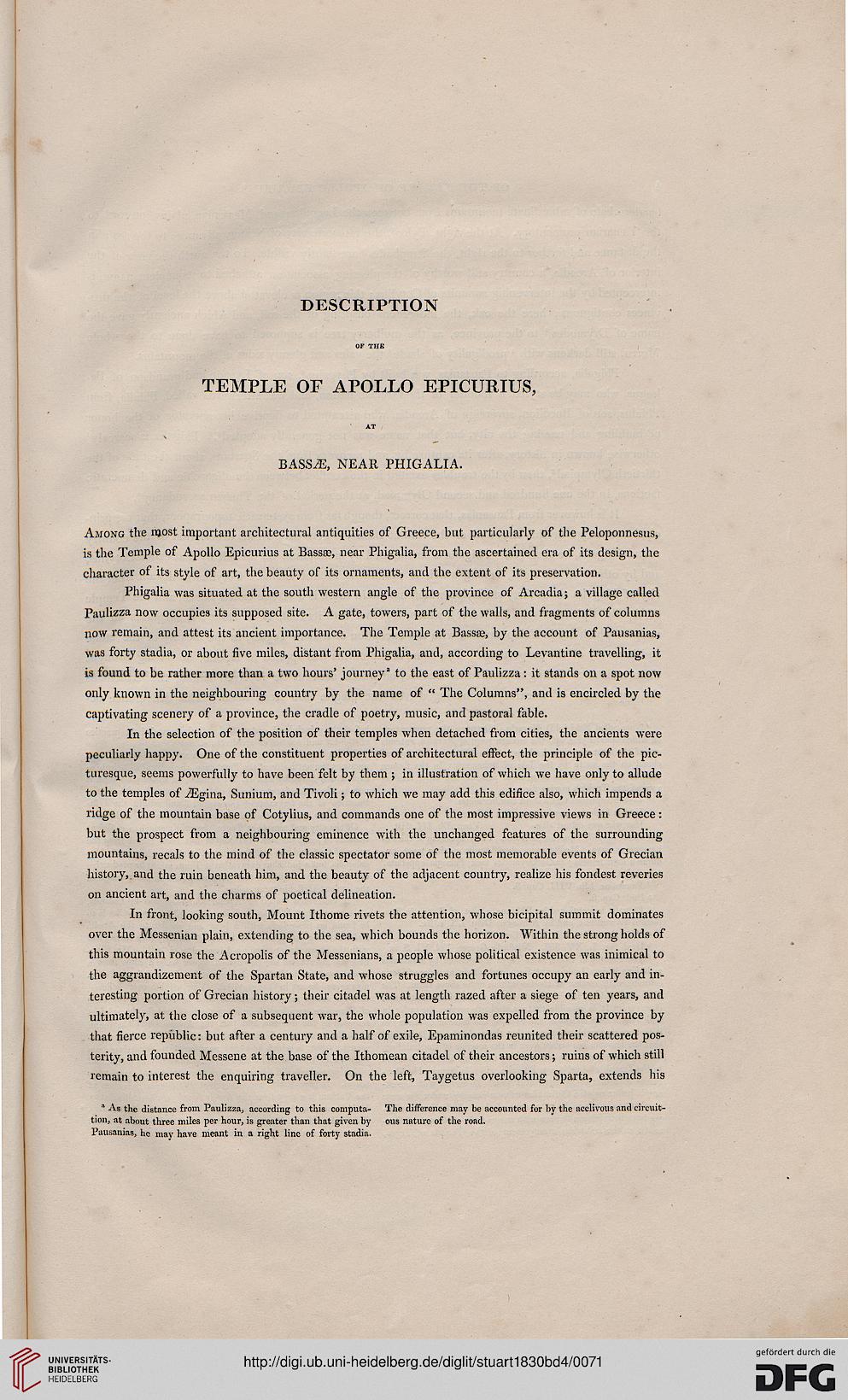 Among the most important architectural antiquities of Greece, but particularly of the Peloponnesus,
is the Temple of Apollo Epicurius at Bassa?, near Phigalia, from the ascertained era of its design, the
character of its style of art, the beauty of its ornaments, and the extent of its preservation.

Phigalia was situated at the south western angle of the province of Arcadia; a village called
Paulizza now occupies its supposed site. A gate, towers, part of the walls, and fragments of columns
now remain, and attest its ancient importance. The Temple at Bassai, by the account of Pausanias,
was forty stadia, or about five miles, distant from Phigalia, and, according to Levantine travelling, it
is found to be rather more than a two hours' journeya to the east of Paulizza : it stands on a spot now
only known in the neighbouring country by the name of " The Columns", and is encircled by the
captivating scenery of a province, the cradle of poetry, music, and pastoral fable.

In the selection of the position of their temples when detached from cities, the ancients were
peculiarly happy. One of the constituent properties of architectural effect, the principle of the pic-
turesque, seems powerfully to have been felt by them ; in illustration of which we have only to allude
to the temples of iEgina, Sunium, and Tivoli; to which we may add this edifice also, which impends a
ridge of the mountain base of Cotylius, and commands one of the most impressive views in Greece:
but the prospect from a neighbouring eminence with the unchanged features of the surrounding
mountains, recals to the mind of the classic spectator some of the most memorable events of Grecian
history, and the ruin beneath him, and the beauty of the adjacent country, realize his fondest reveries
on ancient art, and the charms of poetical delineation.

In front, looking south, Mount Ithome rivets the attention, whose bicipital summit dominates
over the Messenian plain, extending to the sea, which bounds the horizon. Within the strong holds of
this mountain rose the Acropolis of the Messenians, a people whose political existence was inimical to
the aggrandizement of the Spartan State, and whose struggles and fortunes occupy an early and in-
teresting portion of Grecian history; their citadel was at length razed after a siege of ten years, and
ultimately, at the close of a subsequent war, the whole population was expelled from the province by
that fierce republic: but after a century and a half of exile, Epaminondas reunited their scattered pos-
terity, and founded Messene at the base of the Ithomean citadel of their ancestors; ruins of which still
remain to interest the enquiring traveller. On the left, Taygetus overlooking Sparta, extends his

* As the distance from Paulizza, according to this computa- The difference may be accounted for by the acclivous and circuit-
tion, at about three miles per hour, is greater than that given by ous nature of the road.
Pausanias, he may have meant in a right line of forty stadia.