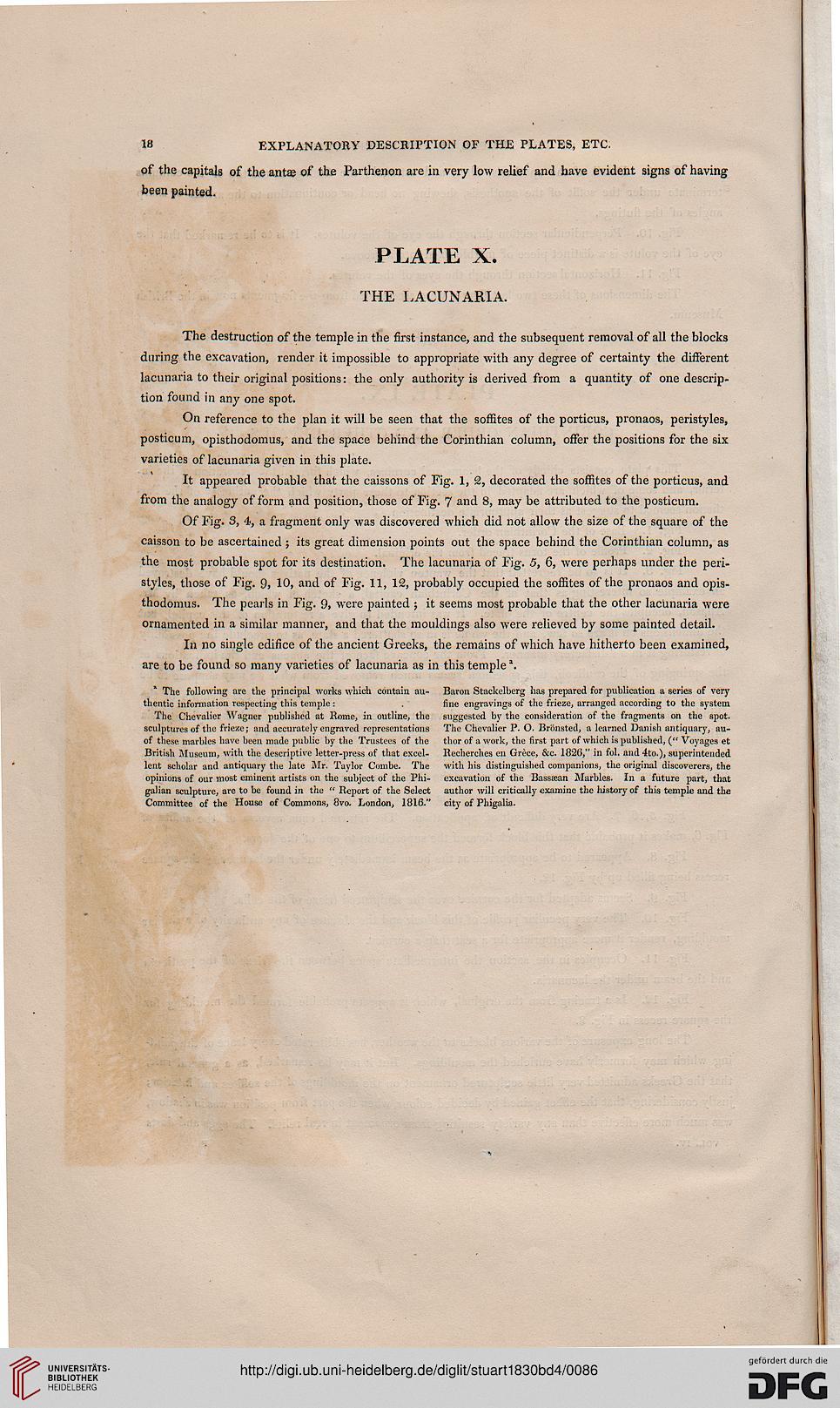 of the capitals of the antae of the Parthenon are in very low relief and have evident signs of having
been painted.

The destruction of the temple in the first instance, and the subsequent removal of all the blocks
during the excavation, render it impossible to appropriate with any degree of certainty the different
lacunaria to their original positions: the only authority is derived from a quantity of one descrip-
tion found in any one spot.

On reference to the plan it will be seen that the soffites of the porticus, pronaos, peristyles,
posticum, opisthodomus, and the space behind the Corinthian column, offer the positions for the six
varieties of lacunaria given in this plate.

It appeared probable that the caissons of Fig. 1, 2, decorated the soffites of the porticus, and
from the analogy of form and position, those of Fig. 7 and 8, may be attributed to the posticum.

Of Fig. 3, 4, a fragment only was discovered which did not allow the size of the square of the
caisson to be ascertained ; its great dimension points out the space behind the Corinthian column, as
the most probable spot for its destination. The lacunaria of Fig. 5, 6, were perhaps under the peri-
styles, those of Fig. 9, 10, and of Fig. 11, 12, probably occupied the soffites of the pronaos and opis-
thodomus. The pearls in Fig. 9, were painted ; it seems most probable that the other lacunaria were
ornamented in a similar manner, and that the mouldings also were relieved by some painted detail.

In no single edifice of the ancient Greeks, the remains of which have hitherto been examined,
are to be found so many varieties of lacunaria as in this temple \

thentic information respecting this temple: . fine engravings of the frieze, arranged according to the system

The Chevalier Wagner published at Rome, in outline, the suggested by the consideration of the fragments on the spot,

of these marbles have been made public by the Trustees of the thor of a work, the first part of which is published, (" Voyages et

British Museum, with the descriptive letter-press of that excel- Becherches en Grece, &c. 1820," in fol. and 4to.), superintended

lent scholar and antiquary the late Mr. Taylor Combe. The with his distinguished companions, the original discoverers, the

opinions of our most eminent artists on the subject of the Phi- excavation of the Bassaean Marbles. In a future part, that

galian sculpture, are to be found in the " Report of the Select author will critically examine the history of this temple and the