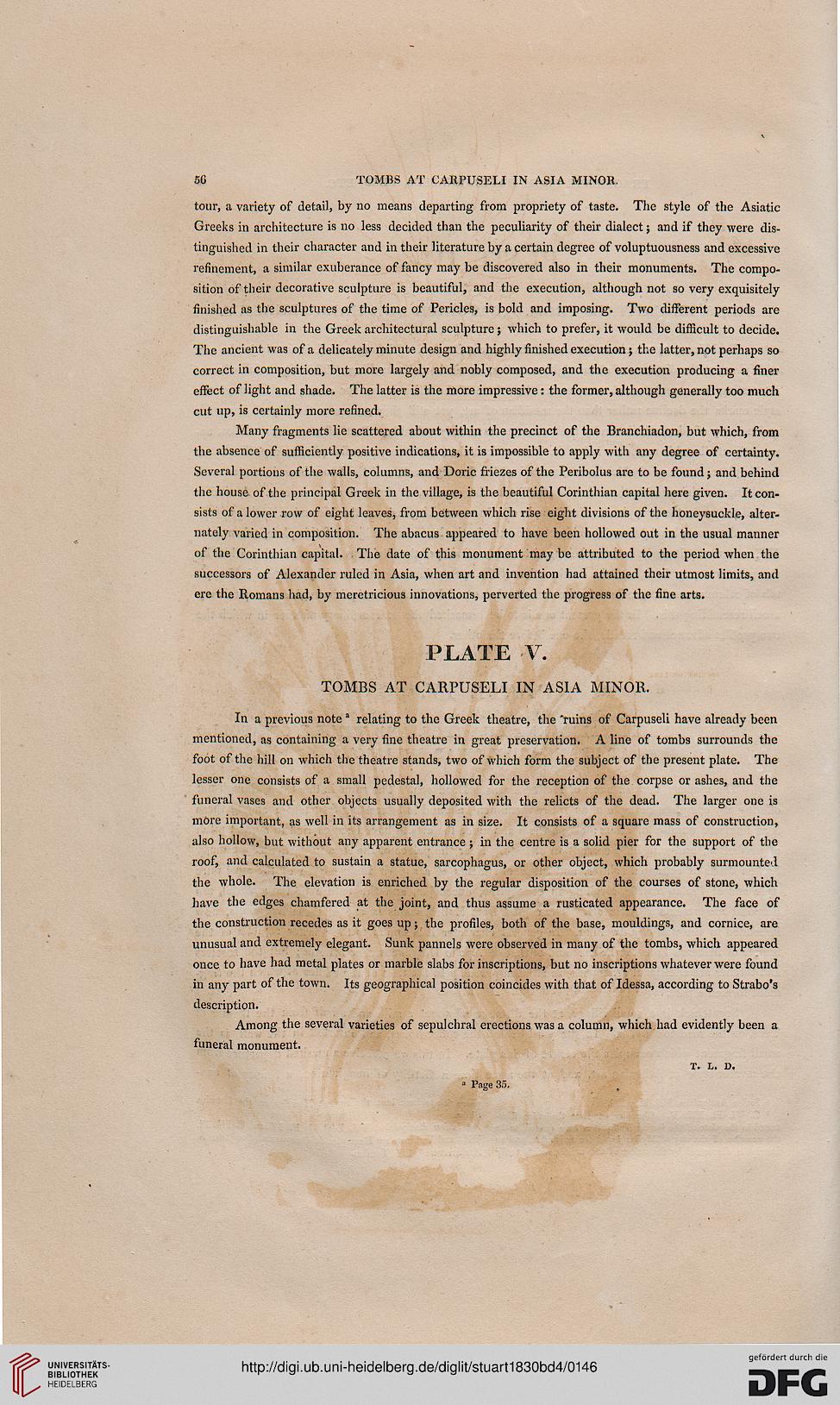 TOMBS AT CAHPUSELI IN ASIA MINOR.

tour, a variety of detail, by no means departing from propriety of taste. The style of the Asiatic
Greeks in architecture is no less decided than the peculiarity of their dialect; and if they were dis-
tinguished in their character and in their literature by a certain degree of voluptuousness and excessive
refinement, a similar exuberance of fancy may be discovered also in their monuments. The compo-
sition of their decorative sculpture is beautiful, and the execution, although not so very exquisitely
finished as the sculptures of the time of Pericles, is bold and imposing. Two different periods are
distinguishable in the Greek architectural sculpture; which to prefer, it would be difficult to decide.
The ancient was of a delicately minute design and highly finished execution ; the latter, not perhaps so
correct in composition, but more largely and nobly composed, and the execution producing a finer
effect of light and shade. The latter is the more impressive : the former, although generally too much
cut up, is certainly more refined.

Many fragments lie scattered about within the precinct of the Branchiadon, but which, from
the absence of sufficiently positive indications, it is impossible to apply with any degree of certainty.
Several portions of the walls, columns, and Doric friezes of the Peribolus are to be found j and behind
the house of the principal Greek in the village, is the beautiful Corinthian capital here given. It con-
sists of a lower row of eight leaves, from between which rise eight divisions of the honeysuckle, alter-
nately varied in composition. The abacus appeared to have been hollowed out in the usual manner
of the Corinthian capital. The date of this monument may be attributed to the period when the
successors of Alexander ruled in Asia, when art and invention had attained their utmost limits, and
ere the Romans had, by meretricious innovations, perverted the progress of the fine arts.

TOMBS AT CARPUSELI IN ASIA MINOR.

In a previous note a relating to the Greek theatre, the 'ruins of Carpuseli have already been
mentioned, as containing a very fine theatre in great preservation. A line of tombs surrounds the
foot of the hill on which the theatre stands, two of which form the subject of the present plate. The
lesser one consists of a small pedestal, hollowed for the reception of the corpse or ashes, and the
funeral vases and other objects usually deposited with the relicts of the dead. The larger one is
more important, as well in its arrangement as in size. It consists of a square mass of construction,
also hollow, but without any apparent entrance ; in the centre is a solid pier for the support of the
roof, and calculated to sustain a statue, sarcophagus, or other object, which probably surmounted
the whole. The elevation is enriched by the regular disposition of the courses of stone, which
have the edges chamfered at the joint, and thus assume a rusticated appearance. The face of
the construction recedes as it goes up; the profiles, both of the base, mouldings, and cornice, are
unusual and extremely elegant. Sunk pannels were observed in many of the tombs, which appeared
once to have had metal plates or marble slabs for inscriptions, but no inscriptions whatever were found
in any part of the town. Its geographical position coincides with that of Idessa, according to Strabo's
description.

Among the several varieties of sepulchral erections was a column, which had evidently been a
funeral monument.