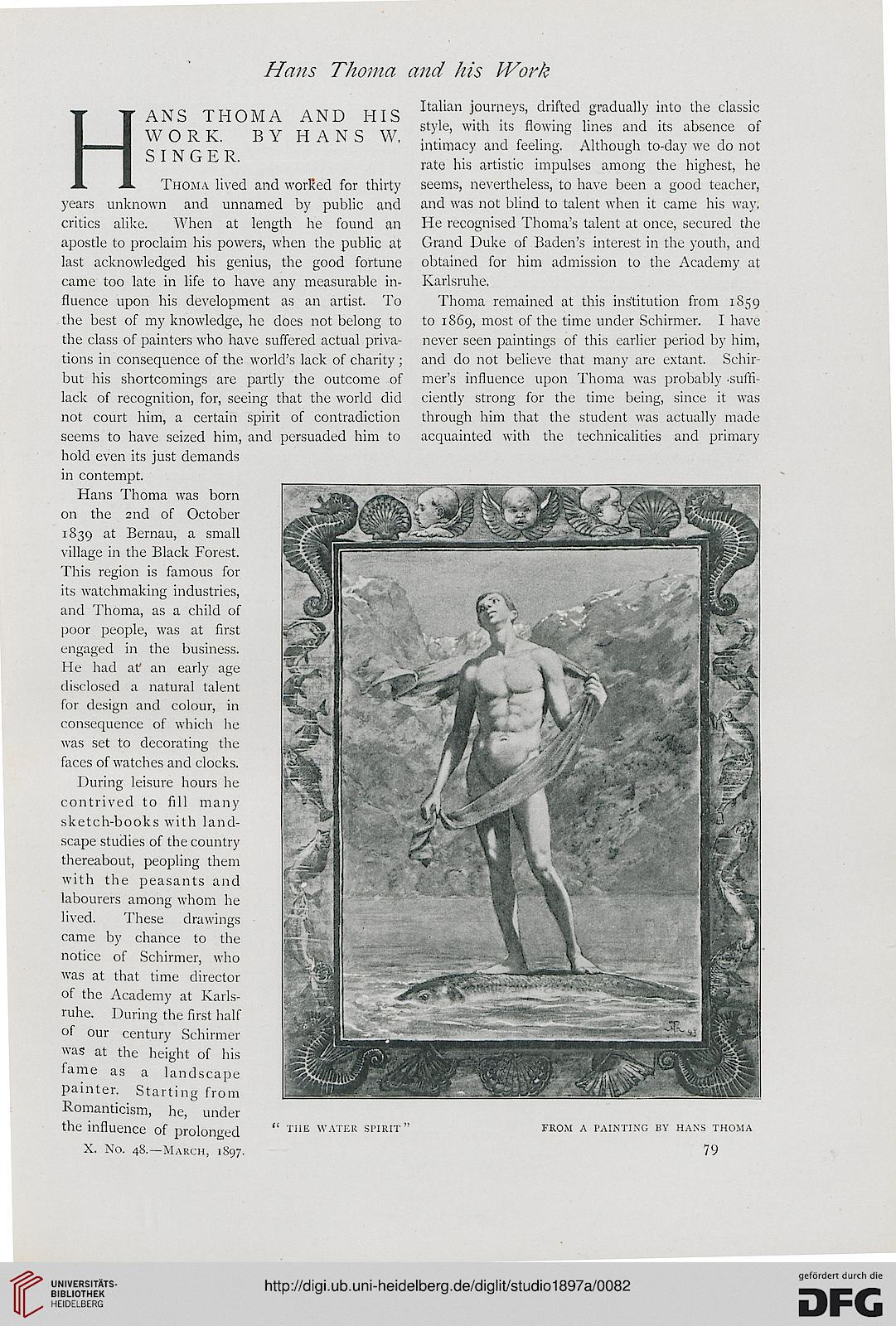 HANS THOMA AND HIS ^ta''an journeys, drifted gradually into the classic
T^ Ar TT XT TTT style, with its flowing lines and its absence of

SINGEP intimacy and feeling. Although to-day we do not

v' rate his artistic impulses among the highest, he

Thoma lived and worEed for thirty seems, nevertheless, to have been a good teacher,
years unknown and unnamed by public and and was not blind to talent when it came his way,
critics alike. When at length he found an He recognised Thoma's talent at once, secured the
apostle to proclaim his powers, when the public at Grand Duke of Baden's interest in the youth, and
last acknowledged his genius, the good fortune obtained for him admission to the Academy at
came too late in life to have any measurable in- Karlsruhe.

fluence upon his development as an artist. To Thoma remained at this institution from 1859
the best of my knowledge, he does not belong to to 1869, most of the time under Schirmer. I have
the class of painters who have suffered actual priva- never seen paintings of this earlier period by him,
tions in consequence of the world's lack of charity; and do not believe that many are extant. Schir-
but his shortcomings arc partly the outcome of mer's influence upon Thoma was probably •suffi-
lack of recognition, for, seeing that the world did ciently strong for the time being, since it was
not court him, a certain spirit of contradiction through him that the student was actually made
seems to have seized him, and persuaded him to acquainted with the technicalities and primary
hold even its just demands
in contempt.

Hans Thoma was born
on the 2nd of October
1839 at Bernau, a small
village in the Black Forest.
This region is famous for
its watchmaking industries,
and Thoma, as a child of
poor people, was at first
engaged in the business.
He had af an early age
disclosed a natural talent
for design and colour, in
consequence of which he
was set to decorating the
faces of watches and clocks.

During leisure hours he
contrived to fill many
sketch-books with land-
scape studies of the country
thereabout, peopling them
with the peasants and
labourers among whom he
lived. These drawings
came by chance to the
notice of Schirmer, who
was at that time director
of the Academy at Karls-
ruhe. During the first half
of our century Schirmer
was at the height of his
fame as a landscape
painter. Starting from
Romanticism, he, under