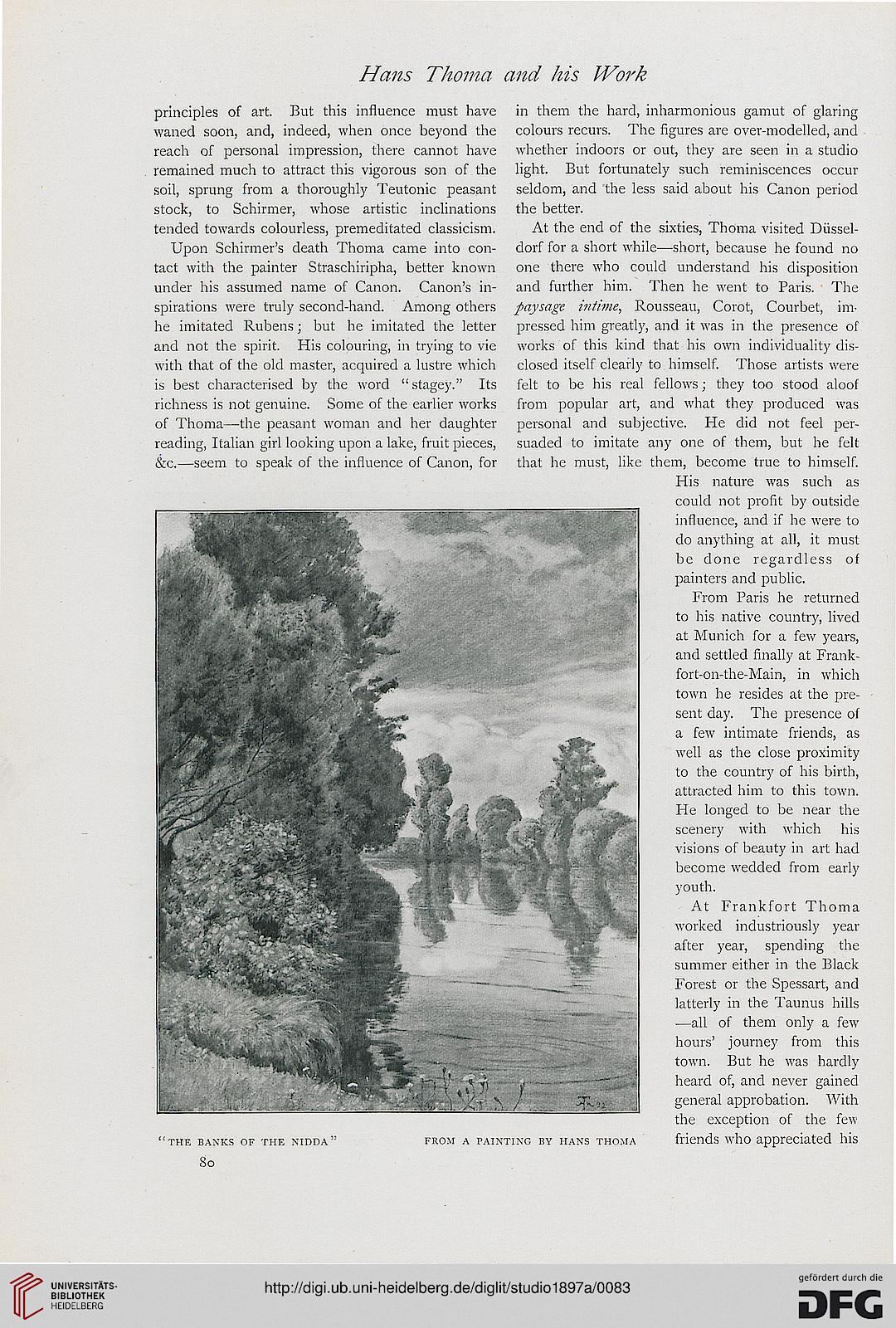 Information about OCR text
Hans Thoma and his Work

principles of art. But this influence must have in them the hard, inharmonious gamut of glaring
waned soon, and, indeed, when once beyond the colours recurs. The figures are over-modelled, and
reach of personal impression, there cannot have whether indoors or out, they are seen in a studio
remained much to attract this vigorous son of the light. But fortunately such reminiscences occur
soil, sprung from a thoroughly Teutonic peasant seldom, and the less said about his Canon period
stock, to Schirmer, whose artistic inclinations the better.

tended towards colourless, premeditated classicism. At the end of the sixties, Thoma visited Diissel-
Upon Schirmer's death Thoma came into con- dorf for a short while—short, because he found no
tact with the painter Straschiripha, better known one there who could understand his disposition
under his assumed name of Canon. Canon's in- and further him. Then he went to Paris. The
spirations were truly second-hand. Among others paysage intime, Rousseau, Corot, Courbet, im>
he imitated Rubens; but he imitated the letter pressed him greatly, and it was in the presence of
and not the spirit. His colouring, in trying to vie works of this kind that his own individuality dis-
with that of the old master, acquired a lustre which closed itself clearly to himself. Those artists were
is best characterised by the word " stagey." Its felt to be his real fellows; they too stood aloof
richness is not genuine. Some of the earlier works from popular art, and what they produced was
of Thoma—the peasant woman and her daughter personal and subjective. He did not feel per-
reading, Italian girl looking upon a lake, fruit pieces, suaded to imitate any one of them, but he felt
&c.—seem to speak of the influence of Canon, for that he must, like them, become true to himself.

His nature was such as
could not profit by outside
influence, and if he were to
do anything at all, it must
be done regardless of
painters and public.

From Paris he returned
to his native country, lived
at Munich for a few years,
and settled finally at Frank-
fort-on-the-Main, in which
town he resides at the pre-
sent day. The presence of
a few intimate friends, as
well as the close proximity
to the country of his birth,
attracted him to this town.
He longed to be near the
scenery with which his
visions of beauty in art had
become wedded from early
youth.

At Frankfort Thoma
worked industriously year
after year, spending the
summer either in the Black
Forest or the Spessart, and
latterly in the Taunus hills
—all of them only a few
hours' journey from this
town. But he was hardly
heard of, and never gained
general approbation. With
the exception of the few
'the banks of the nidda" from a painting by hans thoma friends who appreciated his