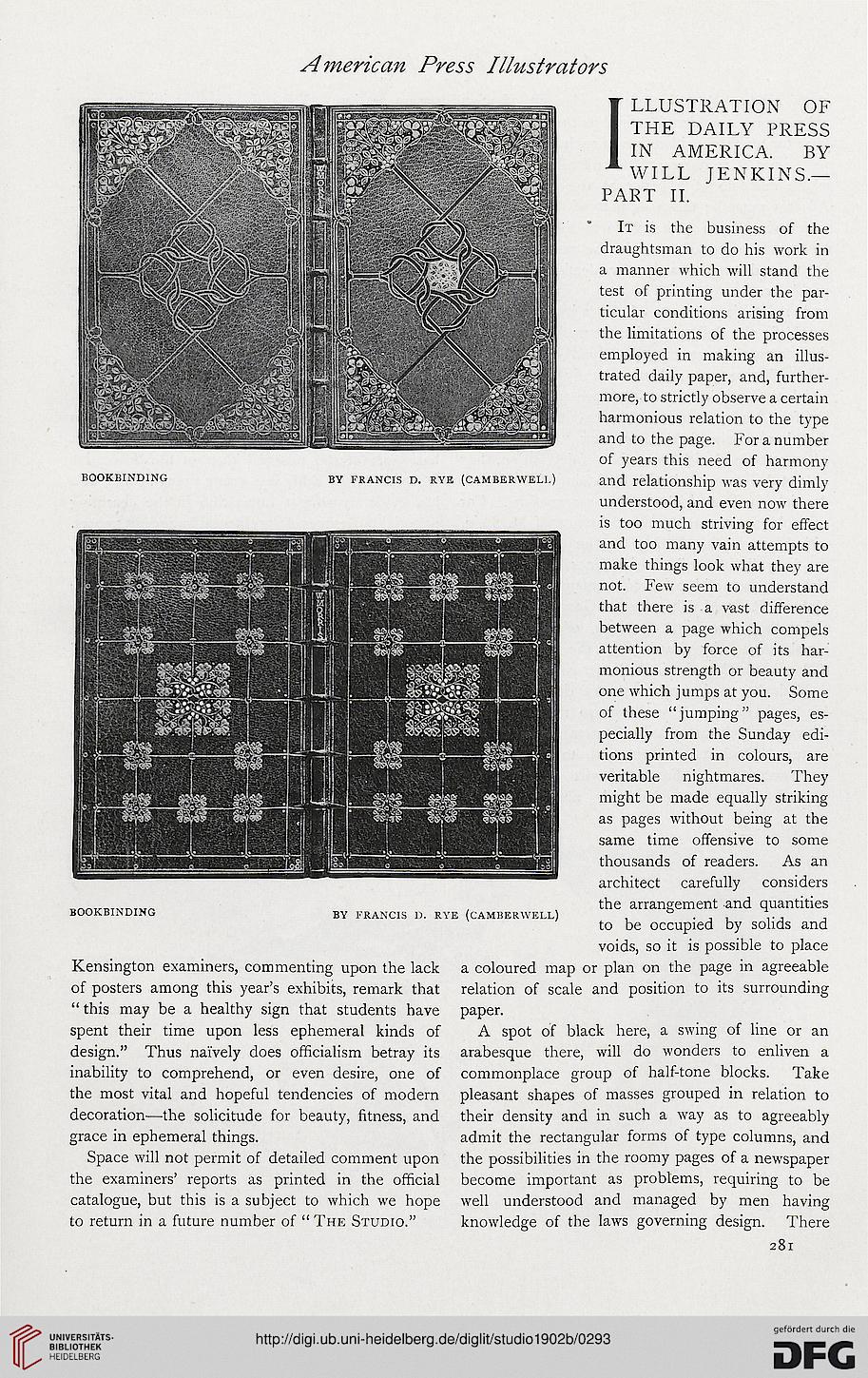 ILLUSTRATION OF
THE DAILY PRESS
IN AMERICA. BY
WILL JENKINS.—
PART II.

It is the business of the
draughtsman to do his work in
a manner which will stand the
test of printing under the par-
ticular conditions arising from
the limitations of the processes
employed in making an illus-
trated daily paper, and, further-
more, to strictly observe a certain
harmonious relation to the type
and to the page. For a number
of years this need of harmony
bookbinding by Francis d. rye (camberweli.) and relationship was very dimly

understood, and even now there
is too much striving for effect
and too many vain attempts to
make things look what they are
not. Few seem to understand
that there is a vast difference
between a page which compels
attention by force of its har-
monious strength or beauty and
one which jumps at you. Some
of these "jumping" pages, es-
pecially from the Sunday edi-
tions printed in colours, are
veritable nightmares. They
might be made equally striking
as pages without being at the
same time offensive to some
thousands of readers. As an
architect carefully considers
the arrangement and quantities

to be occupied by solids and
voids, so it is possible to place

Kensington examiners, commenting upon the lack a coloured map or plan on the page in agreeable
of posters among this year's exhibits, remark that relation of scale and position to its surrounding
" this may be a healthy sign that students have paper.

spent their time upon less ephemeral kinds of A spot of black here, a swing of line or an
design." Thus naively does officialism betray its arabesque there, will do wonders to enliven a
inability to comprehend, or even desire, one of commonplace group of half-tone blocks. Take
the most vital and hopeful tendencies of modern pleasant shapes of masses grouped in relation to
decoration—the solicitude for beauty, fitness, and their density and in such a way as to agreeably
grace in ephemeral things. admit the rectangular forms of type columns, and

Space will not permit of detailed comment upon the possibilities in the roomy pages of a newspaper
the examiners' reports as printed in the official become important as problems, requiring to be
catalogue, but this is a subject to which we hope well understood and managed by men having
to return in a future number of "The Studio." knowledge of the laws governing design. There