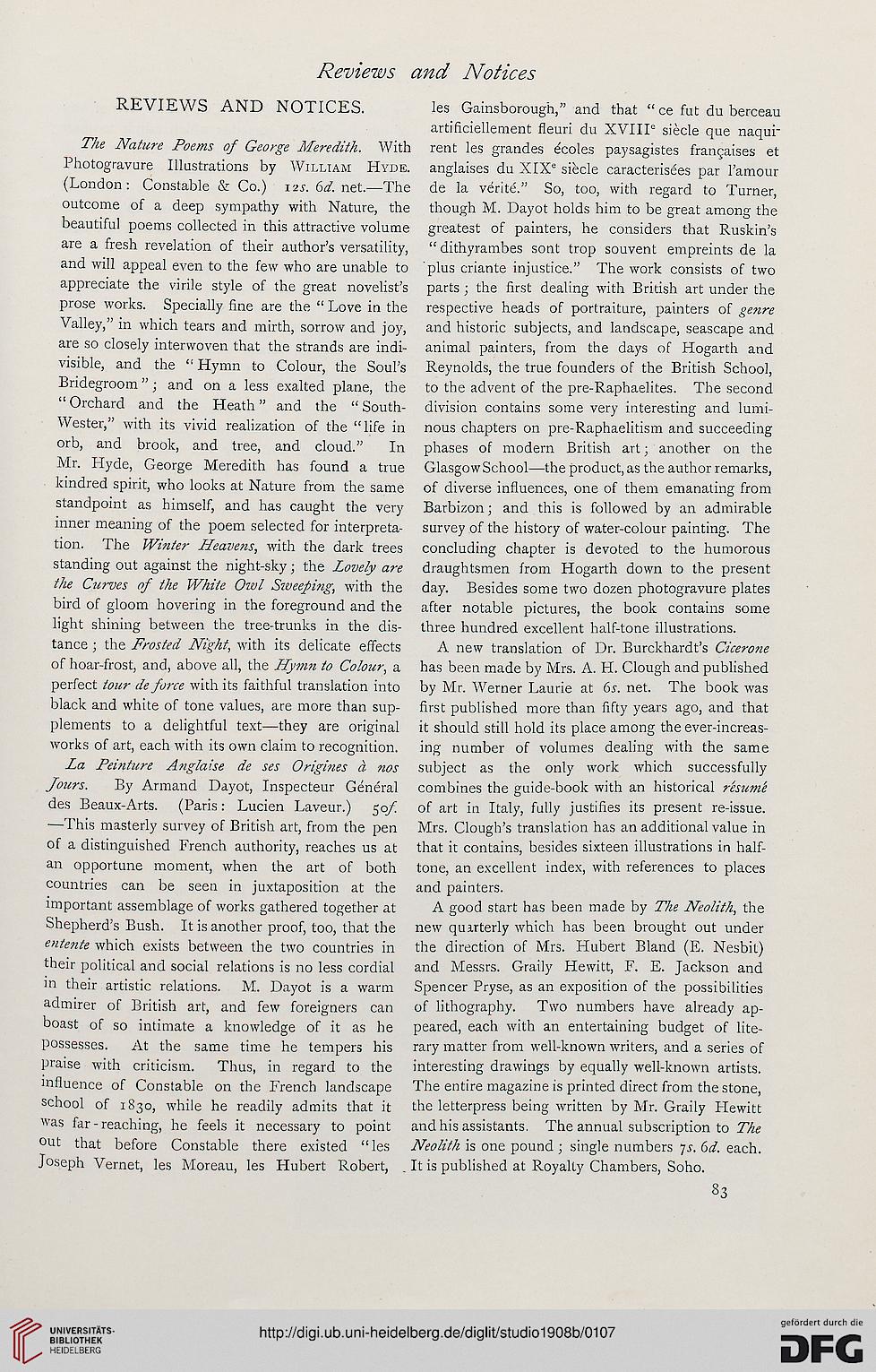 The Nature Poems of George Meredith. With
Photogravure Illustrations by William Hyde.
(London: Constable & Co.) 125. 6d. net.—The
outcome of a deep sympathy with Nature, the
beautiful poems collected in this attractive volume
are a fresh revelation of their author’s versatility,
and will appeal even to the few who are unable to
appreciate the virile style of the great novelist’s
prose works. Specially fine are the “ Love in the
Valley,” in which tears and mirth, sorrow and joy,
are so closely interwoven that the strands are indi-
visible, and the 11 Hymn to Colour, the Soul’s
Bridegroom ”; and on a less exalted plane, the
“ Orchard and the Heath ” and the “ South-
Wester,” with its vivid realization of the “life in
orb, and brook, and tree, and cloud.” In
Mr. Hyde, George Meredith has found a true
kindred spirit, who looks at Nature from the same
standpoint as himself, and has caught the very
inner meaning of the poem selected for interpreta-
tion. The Winter Heavens, with the dark trees
standing out against the night-sky; the Lovely are
the Curves of the White Owl Sweeping, with the
bird of gloom hovering in the foreground and the
light shining between the tree-trunks in the dis-
tance ; the Frosted Night, with its delicate effects
of hoar-frost, and, above all, the Hymn to Colour, a
perfect tour de force with its faithful translation into
black and white of tone values, are more than sup-
plements to a delightful text—they are original
works of art, each with its own claim to recognition.

La Peinture Anglaise de ses Origines a nos
Jours. By Armand Dayot, Inspecteur General
des Beaux-Arts. (Paris: Lucien Laveur.) 50/i
—This masterly survey of British art, from the pen
of a distinguished French authority, reaches us at
an opportune moment, when the art of both
countries can be seen in juxtaposition at the
important assemblage of works gathered together at
Shepherd’s Bush. It is another proof, too, that the
entente which exists between the two countries in
their political and social relations is no less cordial
in their artistic relations. M. Dayot is a warm
admirer of British art, and few foreigners can
boast of so intimate a knowledge of it as he
possesses. At the same time he tempers his
praise with criticism. Thus, in regard to the
influence of Constable on the French landscape
school of 1830, while he readily admits that it
was far-reaching, he feels it necessary to point
out that before Constable there existed “les
Joseph Vernet, les Moreau, les Hubert Robert,

les Gainsborough,” and that “ ce fut du berceau
artificiellement fleuri du XVIII8 siecle que naqui-
rent les grandes ecoles paysagistes frangaises et
anglaises du XIXe siecle caracterisees par l’amour
de la verite.” So, too, with regard to Turner,
though M. Dayot holds him to be great among the
greatest of painters, he considers that Ruskin’s
“ dithyrambes sont trop souvent empreints de la
plus criante injustice.” The work consists of two
parts ; the first dealing with British art under the
respective heads of portraiture, painters of genre
and historic subjects, and landscape, seascape and
animal painters, from the days of Hogarth and
Reynolds, the true founders of the British School,
to the advent of the pre-Raphaelites. The second
division contains some very interesting and lumi-
nous chapters on pre-Raphaelitism and succeeding
phases of modern British art; another on the
Glasgow School—the product, as the author remarks,
of diverse influences, one of them emanating from
Barbizon; and this is followed by an admirable
survey of the history of water-colour painting. The
concluding chapter is devoted to the humorous
draughtsmen from Hogarth down to the present
day. Besides some two dozen photogravure plates
after notable pictures, the book contains some
three hundred excellent half-tone illustrations.

A new translation of Dr. Burckhardt’s Cicerone
has been made by Mrs. A. H. Clough and published
by Mr. Werner Laurie at 6s. net. The book was
first published more than fifty years ago, and that
it should still hold its place among the ever-increas-
ing number of volumes dealing with the same
subject as the only work which successfully
combines the guide-book with an historical resume
of art in Italy, fully justifies its present re-issue.
Mrs. Clough’s translation has an additional value in
that it contains, besides sixteen illustrations in half-
tone, an excellent index, with references to places
and painters.

A good start has been made by The Neolith, the
new quarterly which has been brought out under
the direction of Mrs. Hubert Bland (E. Nesbit)
and Messrs. Graily Hewitt, F. E. Jackson and
Spencer Pryse, as an exposition of the possibilities
of lithography. Two numbers have already ap-
peared, each with an entertaining budget of lite-
rary matter from well-known writers, and a series of
interesting drawings by equally well-known artists.
The entire magazine is printed direct from the stone,
the letterpress being written by Mr. Graily Hewitt
and his assistants. The annual subscription to The
Neolith is one pound ; single numbers 7s. 6d. each.

It is published at Royalty Chambers, Soho.