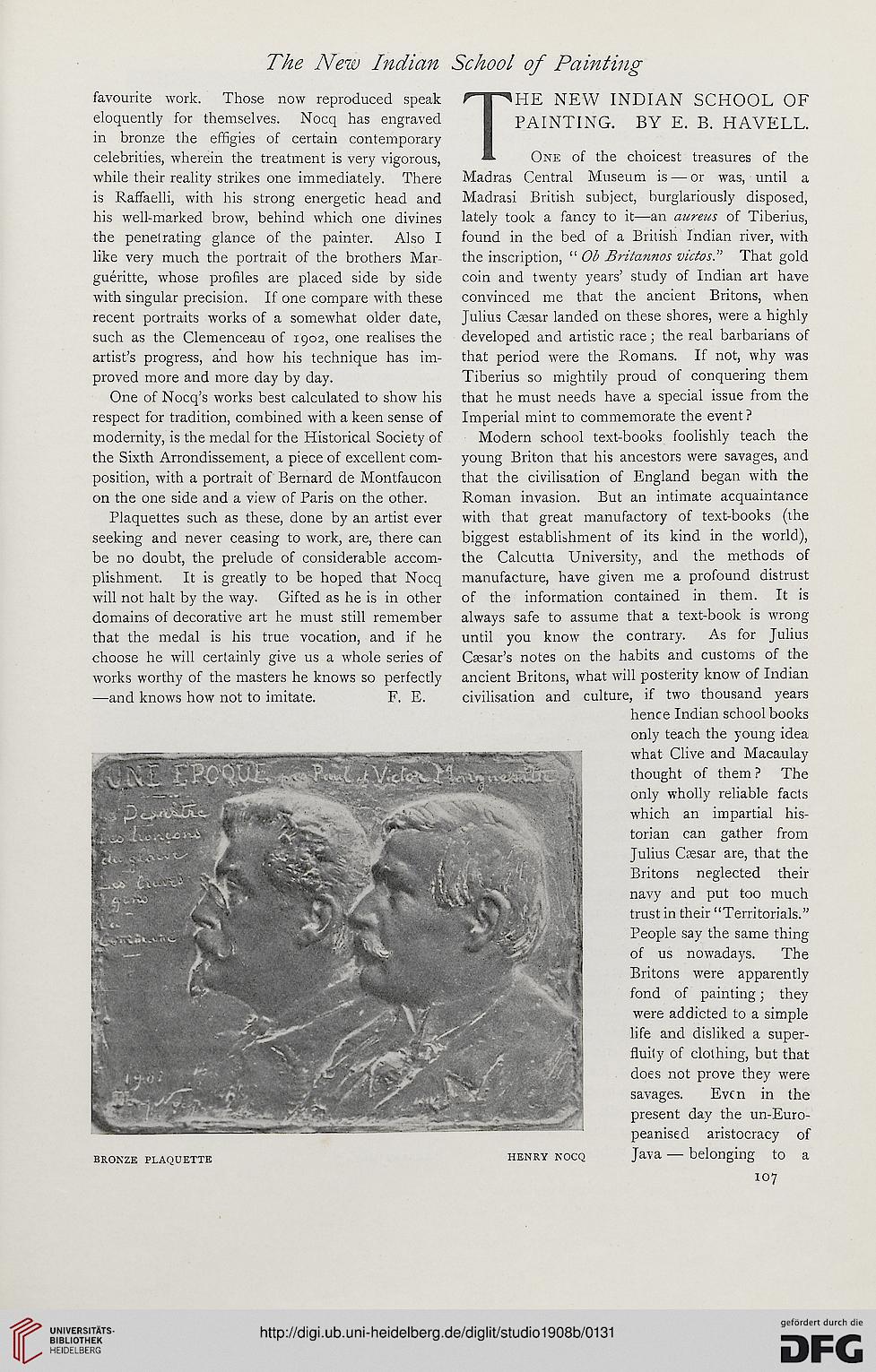 favourite work. Those now reproduced speak
eloquently for themselves. Nocq has engraved
in bronze the effigies of certain contemporary
celebrities, wherein the treatment is very vigorous,
while their reality strikes one immediately. There
is Raffaelli, with his strong energetic head and
his well-marked brow, behind which one divines
the penetrating glance of the painter. Also I
like very much the portrait of the brothers Mar-
gueritte, whose profiles are placed side by side
with singular precision. If one compare with these
recent portraits works of a somewhat older date,
such as the Clemenceau of 1902, one realises the
artist’s progress, and how his technique has im-
proved more and more day by day.

One of Nocq’s works best calculated to show his
respect for tradition, combined with a keen sense of
modernity, is the medal for the Historical Society of
the Sixth Arrondissement, a piece of excellent com-
position, with a portrait of Bernard de Montfaucon
on the one side and a view of Paris on the other.

Plaquettes such as these, done by an artist ever
seeking and never ceasing to work, are, there can
be no doubt, the prelude of considerable accom-
plishment. It is greatly to be hoped that Nocq
will not halt by the way. Gifted as he is in other
domains of decorative art he must still remember
that the medal is his true vocation, and if he
choose he will certainly give us a whole series of
works worthy of the masters he knows so perfectly
—and knows how not to imitate. F. E.

THE NEW INDIAN SCHOOL OF
PAINTING. BY E. B. HAVELL.

One of the choicest treasures of the
Madras Central Museum is — or was, until a
Madrasi British subject, burglariously disposed,
lately took a fancy to it—an aureus of Tiberius,
found in the bed of a British Indian river, with
the inscription, “ Ob Britannos victos.” That gold
coin and twenty years’ study of Indian art have
convinced me that the ancient Britons, when
Julius Caesar landed on these shores, were a highly
developed and artistic race; the real barbarians of
that period were the Romans. If not, why was
Tiberius so mightily proud of conquering them
that he must needs have a special issue from the
Imperial mint to commemorate the event?

Modern school text-books foolishly teach the
young Briton that his ancestors were savages, and
that the civilisation of England began with the
Roman invasion. But an intimate acquaintance
with that great manufactory of text-books (the
biggest establishment of its kind in the world),
the Calcutta University, and the methods of
manufacture, have given me a profound distrust
of the information contained in them. It is
always safe to assume that a text-book is wrong
until you know the contrary. As for Julius
Caesar's notes on the habits and customs of the
ancient Britons, what will posterity know of Indian
civilisation and culture, if two thousand years
hence Indian school books
only teach the young idea
what Clive and Macaulay
thought of them ? The
only wholly reliable facts
which an impartial his-
torian can gather from
Julius Caesar are, that the
Britons neglected their
navy and put too much
trust in their “Territorials.”
People say the same thing
of us nowadays. The
Britons were apparently
fond of painting; they
were addicted to a simple
life and disliked a super-
fluity of clothing, but that
does not prove they were
savages. Even in the
present day the un-Euro-
peanised aristocracy of
Java — belonging to a
107