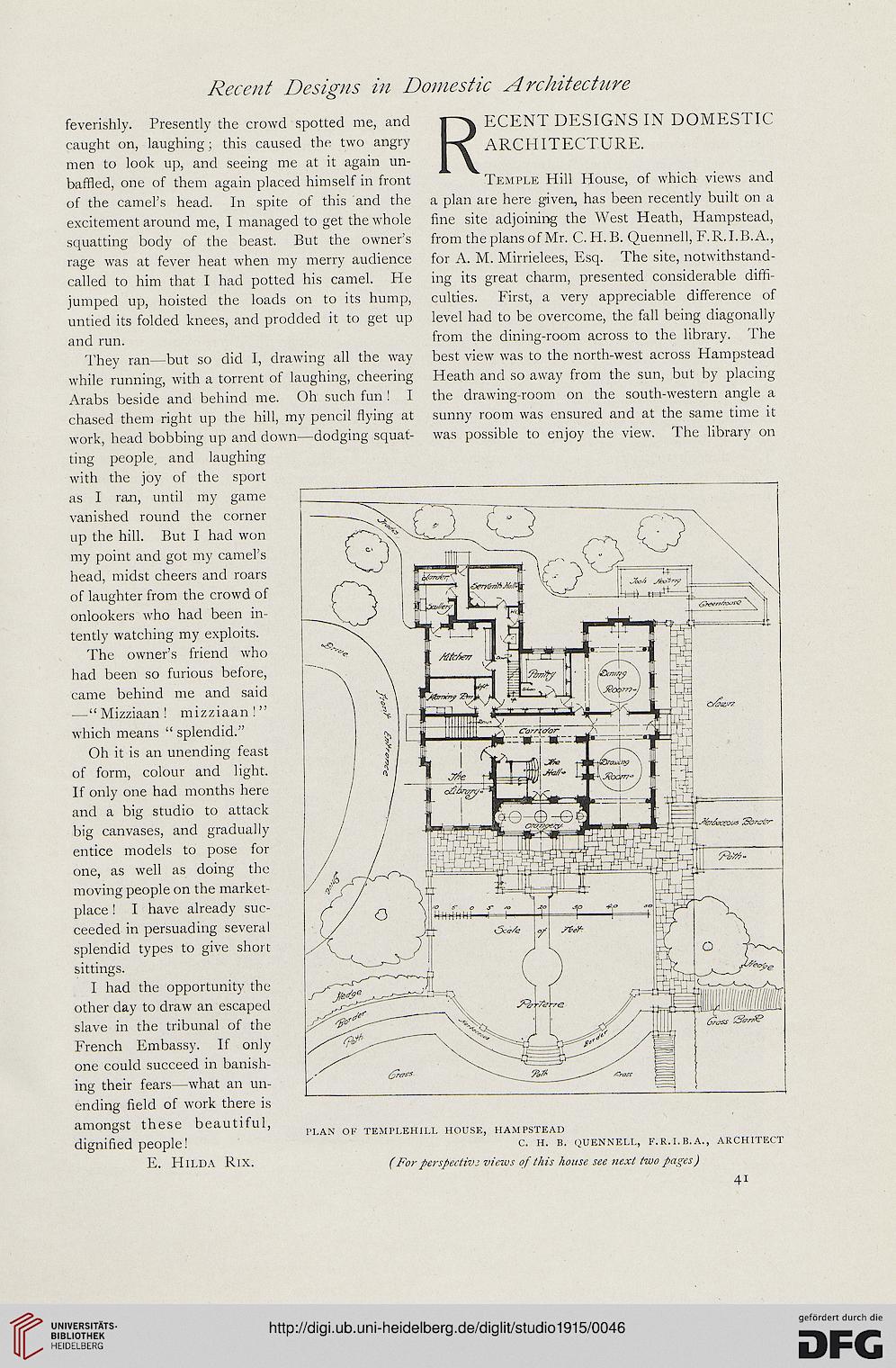 feverishly. Presently the crowd spotted me, and T~-v ECENT DESIGNS IN DOMESTIC
caught on, laughing; this caused the two angry ARCHITECTURE.

men to look up, and seeing me at it again un-

baffled, one of them again placed himself in front Temple Hill House, of which views and

of the camel's head. In spite of this and the a plan are here given, has been recently built on a
excitement around me, I managed to get the whole fine site adjoining the West Heath, Hampstead,
squatting body of the beast. But the owner's from the plans of Mr. C.H.B. Quennell, F.R.I. B. A.,
rage was at fever heat when my merry audience for A. M. Mirrielees, Esq. The site, notwithstand-
called to him that I had potted his camel. He ing its great charm, presented considerable diffi-
jumped up, hoisted the loads on to its hump, culties. First, a very appreciable difference of
untied its folded knees, and prodded it to get up level had to be overcome, the fall being diagonally
and run. from the dining-room across to the library. The

They ran—but so did I, drawing all the way best view was to the north-west across Hampstead
while running, with a torrent of laughing, cheering Heath and so away from the sun, but by placing
Arabs beside and behind me. Oh such fun ! I the drawing-room on the south-western angle a
chased them right up the hill, my pencil flying at sunny room was ensured and at the same time it
work, head bobbing up and down—dodging squat- was possible to enjoy the view. The library on
ting people, and laughing
with the joy of the sport
as I ran, until my game
vanished round the corner
up the hill. But I had won
my point and got my camel's
head, midst cheers and roars
of laughter from the crowd of
onlookers who had been in-
tently watching my exploits.

The owner's friend who
had been so furious before,
came behind me and said
—" Mizziaan ! mizziaan!"
which means " splendid."

Oh it is an unending feast
of form, colour and light.
If only one had months here
and a big studio to attack
big canvases, and gradually
entice models to pose for
one, as well as doing the
moving people on the market-
place ! I have already suc-
ceeded in persuading several
splendid types to give short
sittings.

I had the opportunity the
other day to draw an escaped
slave in the tribunal of the
French Embassy. If only
one could succeed in banish-
ing their fears—what an un-
ending field of work there is
amongst these beautiful,