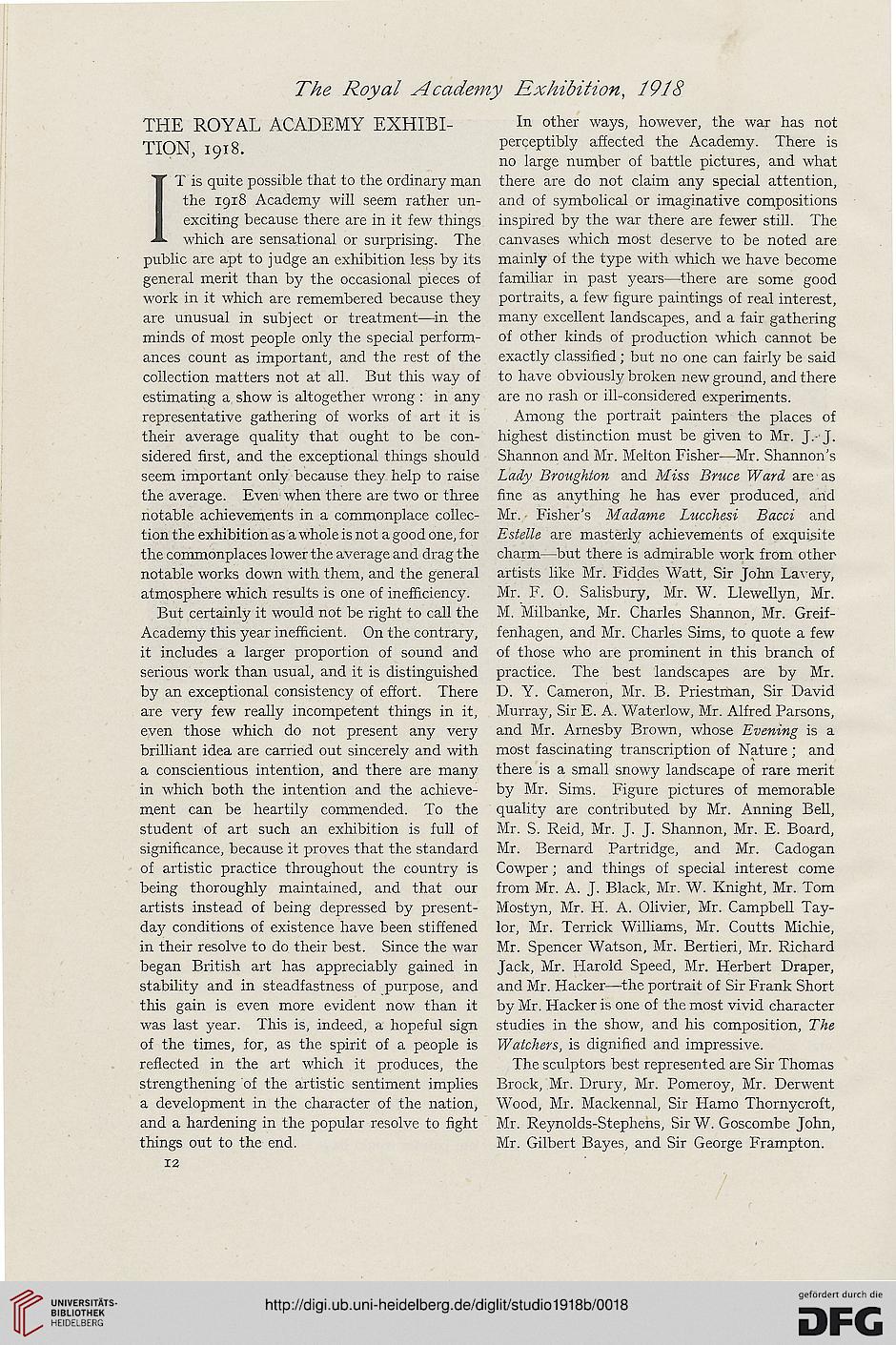 IT is quite possible that to the ordinary man
the 1918 Academy will seem rather un-
exciting because there are in it few things
which are sensational or surprising. The
public are apt to judge an exhibition less by its
general merit than by the occasional pieces of
work in it which are remembered because they
are unusual in subject or treatment—in the
minds of most people only the special perform-
ances count as important, and the rest of the
collection matters not at all. But this way of
estimating a show is altogether wrong : in any
representative gathering of works of art it is
their average quality that ought to be con-
sidered first, and the exceptional things should
seem important only because they help to raise
the average. Even when there are two or three
notable achievements in a commonplace collec-
tion the exhibition as a whole is not a good one, for
the commonplaces lower the average and drag the
notable works down with them, and the general
atmosphere which results is one of inefficiency.

But certainly it would not be right to call the
Academy this year inefficient. On the contrary,
it includes a larger proportion of sound and
serious work than usual, and it is distinguished
by an exceptional consistency of effort. There
are very few really incompetent things in it,
even those which do not present any very
brilliant idea are carried out sincerely and with
a conscientious intention, and there are many
in which both the intention and the achieve-
ment can be heartily commended. To the
student of art such an exhibition is full of
significance, because it proves that the standard
of artistic practice throughout the country is
being thoroughly maintained, and that our
artists instead of being depressed by present-
day conditions of existence have been stiffened
in their resolve to do their best. Since the war
began British art has appreciably gained in
stability and in steadfastness of purpose, and
this gain is even more evident now than it
was last year. This is, indeed, a hopeful sign
of the times, for, as the spirit of a people is
reflected in the art which it produces, the
strengthening of the artistic sentiment implies
a development in the character of the nation,
and a hardening in the popular resolve to fight
things out to the end.
12

In other ways, however, the war has not
perceptibly affected the Academy. There is
no large number of battle pictures, and what
there are do not claim any special attention,
and of symbolical or imaginative compositions
inspired by the war there are fewer still. The
canvases which most deserve to be noted are
mainly of the type with which we have become
familiar in past years—there are some good
portraits, a few figure paintings of real interest,
many excellent landscapes, and a fair gathering
of other kinds of production which cannot be
exactly classified; but no one can fairly be said
to have obviously broken new ground, and there
are no rash or ill-considered experiments.

Among the portrait painters the places of
highest distinction must be given to Mr. J.- J.
Shannon and Mr. Melton Fisher—Mr. Shannon's
Lady Broughton and Miss Bruce Ward are as
fine as anything he has ever produced, and
Mr. Fisher's Madame Lucchesi Bacci and
Estelle are masterly achievements of exquisite
charm—but there is admirable work from other
artists like Mr. Fiddes Watt, Sir John Lavery,
Mr. F. 0. Salisbury, Mr. W. Llewellyn, Mr.
M. Milbanke, Mr. Charles Shannon, Mr. Greif-
fenhagen, and Mr. Charles Sims, to quote a few
of those who are prominent in this branch of
practice. The best landscapes are by Mr.
D. Y. Cameron, Mr. B. Priestman, Sir David
Murray, Sir E. A. Waterlow, Mr. Alfred Parsons,
and Mr. Arnesby Brown, whose Evening is a
most fascinating transcription of Nature ; and
there is a small snowy landscape of rare merit
by Mr. Sims. Figure pictures of memorable
quality are contributed by Mr. Anning Bell,
Mr. S. Reid, Mr. J. J. Shannon, Mr. E. Board,
Mr. Bernard Partridge, and Mr. Cadogan
Cowper; and things of special interest come
from Mr. A. J. Black, Mr. W. Knight, Mr. Tom
Mostyn, Mr. H. A. Olivier, Mr. Campbell Tay-
lor, Mr. Terrick Williams, Mr. Coutts Michie,
Mr. Spencer Watson, Mr. Bertieri, Mr. Richard
Jack, Mr. Harold Speed, Mr. Herbert Draper,
and Mr. Hacker—the portrait of Sir Frank Short
by Mr. Hacker is one of the most vivid character
studies in the show, and his composition, The
Watchers, is dignified and impressive.