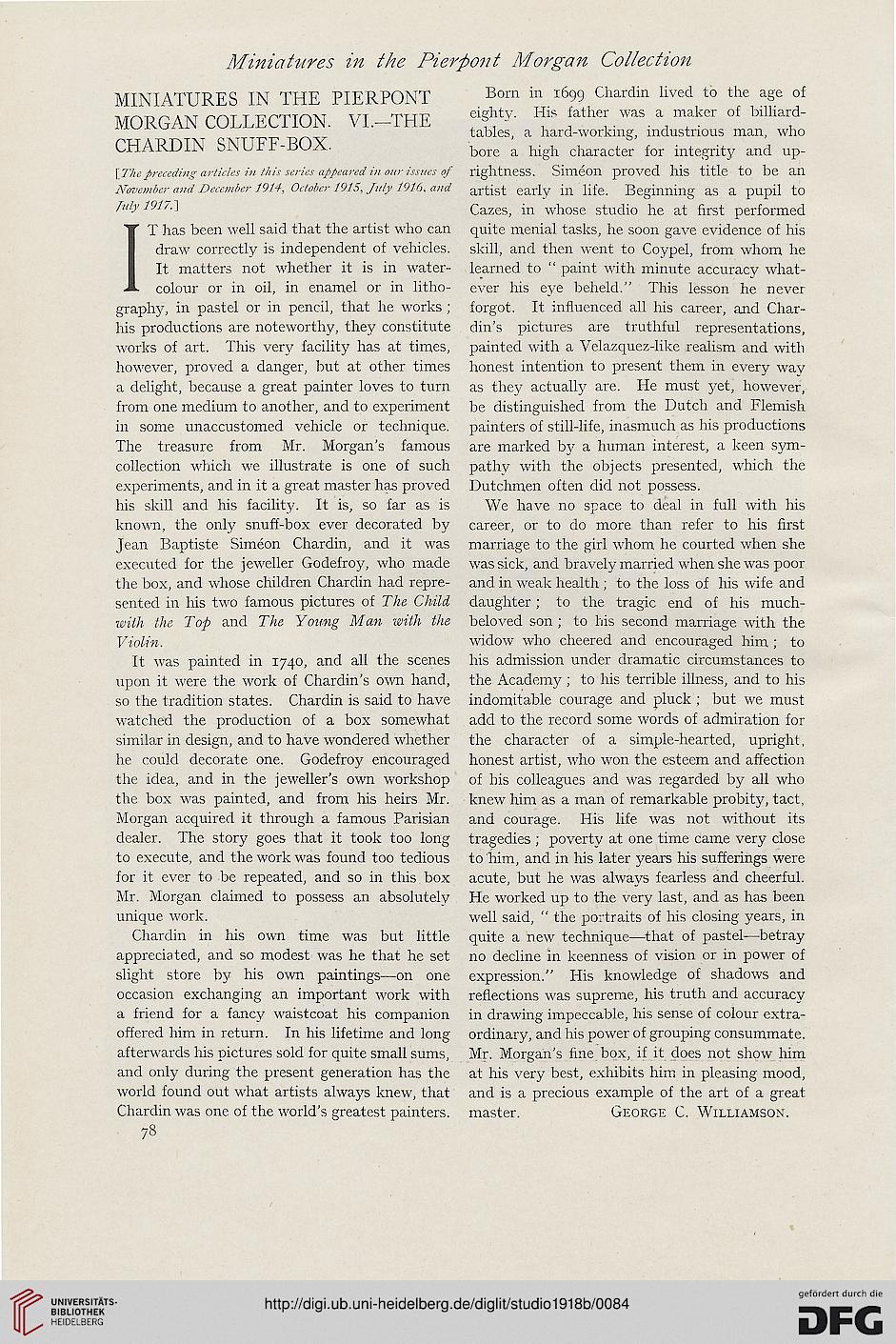 Information about OCR text
Miniatures in the Pierfiont Morgan Collection

IT has been well said that the artist who can
draw correctly is independent of vehicles.
It matters not whether it is in water-
colour or in oil, in enamel or in litho-
graphy, in pastel or in pencil, that he works ;
his productions are noteworthy, they constitute
works of art. This very facility has at times,
however, proved a danger, but at other times
a delight, because a great painter loves to turn
from one medium to another, and to experiment
in some unaccustomed vehicle or technique.
The treasure from Mr. Morgan's famous
collection which we illustrate is one of such
experiments, and in it a great master has proved
his skill and his facility. It is, so far as is
known, the only snuff-box ever decorated by
Jean Baptiste Simeon Chardin, and it was
executed for the jeweller Godefroy, who made
the box, and whose children Chardin had repre-
sented in his two famous pictures of The Child
with the Top and The Young Man with the
Violin.

It was painted in 1740, and all the scenes
upon it were the work of Chardin's own hand,
so the tradition states. Chardin is said to have
watched the production of a box somewhat
similar in design, and to have wondered whether
he could decorate one. Godefroy encouraged
the idea, and in the jeweller's own workshop
the box was painted, and from his heirs Mr.
Morgan acquired it through a famous Parisian
dealer. The story goes that it took too long
to execute, and the work was found too tedious
for it ever to be repeated, and so in this box
Mr. Morgan claimed to possess an absolutely
unique work.

Chardin in his own time was but little
appreciated, and so modest was he that he set
slight store by his own paintings—on one
occasion exchanging an important work with
a friend for a fancy waistcoat his companion
offered him in return. In his lifetime and long
afterwards his pictures sold for quite small sums,
and only during the present generation has the
world found out what artists alwaj's knew, that
Chardin was one of the world's greatest painters.
78

Born in 1699 Chardin lived to the age of
eighty. His father was a maker of billiard-
tables, a hard-working, industrious man, who
bore a high character for integrity and up-
rightness. Simeon proved his title to be an
artist early in life. Beginning as a pupil to
Cazes, in whose studio he at first performed
quite menial tasks, he soon gave evidence of his
skill, and then went to Coypel, from whom he
learned to " paint with minute accuracy what-
ever his eye beheld." This lesson he never
forgot. It influenced all his career, and Char-
din's pictures are truthful representations,
painted with a Velazquez-like realism and with
honest intention to present them in every way
as they actually are. He must yet, however,
be distinguished from the Dutch and Flemish
painters of still-life, inasmuch as his productions
are marked by a human interest, a keen sym-
pathy with the objects presented, which the
Dutchmen often did not possess.

We have no space to deal in full with his
career, or to do more than refer to his first
marriage to the girl whom he courted when she
was sick, and bravely married when she was poor
and in weak health ; to the loss of his wife and
daughter; to the tragic end of his much-
beloved son ; to his second marriage with the
widow who cheered and encouraged him ; to
his admission under dramatic circumstances to
the Academy ; to his terrible illness, and to his
indomitable courage and pluck ; but we must
add to the record some words of admiration for
the character of a simple-hearted, upright,
honest artist, who won the esteem and affection
of his colleagues and was regarded by all who
knew him as a man of remarkable probity, tact,
and courage. His life was not without its
tragedies ; poverty at one time came very close
to him, and in his later years his sufferings were
acute, but he was always fearless and cheerful.
He worked up to the very last, and as has been
well said, " the portraits of his closing years, in
quite a new technique—that of pastel—betray
no decline in keenness of vision or in power of
expression." His knowledge of shadows and
reflections was supreme, his truth and accuracy
in drawing impeccable, his sense of colour extra-
ordinary, and his power of grouping consummate.
Mr. Morgan's fine box, if it does not show him
at his very best, exhibits him in pleasing mood,
and is a precious example of the art of a great
master. George C. Williamson.