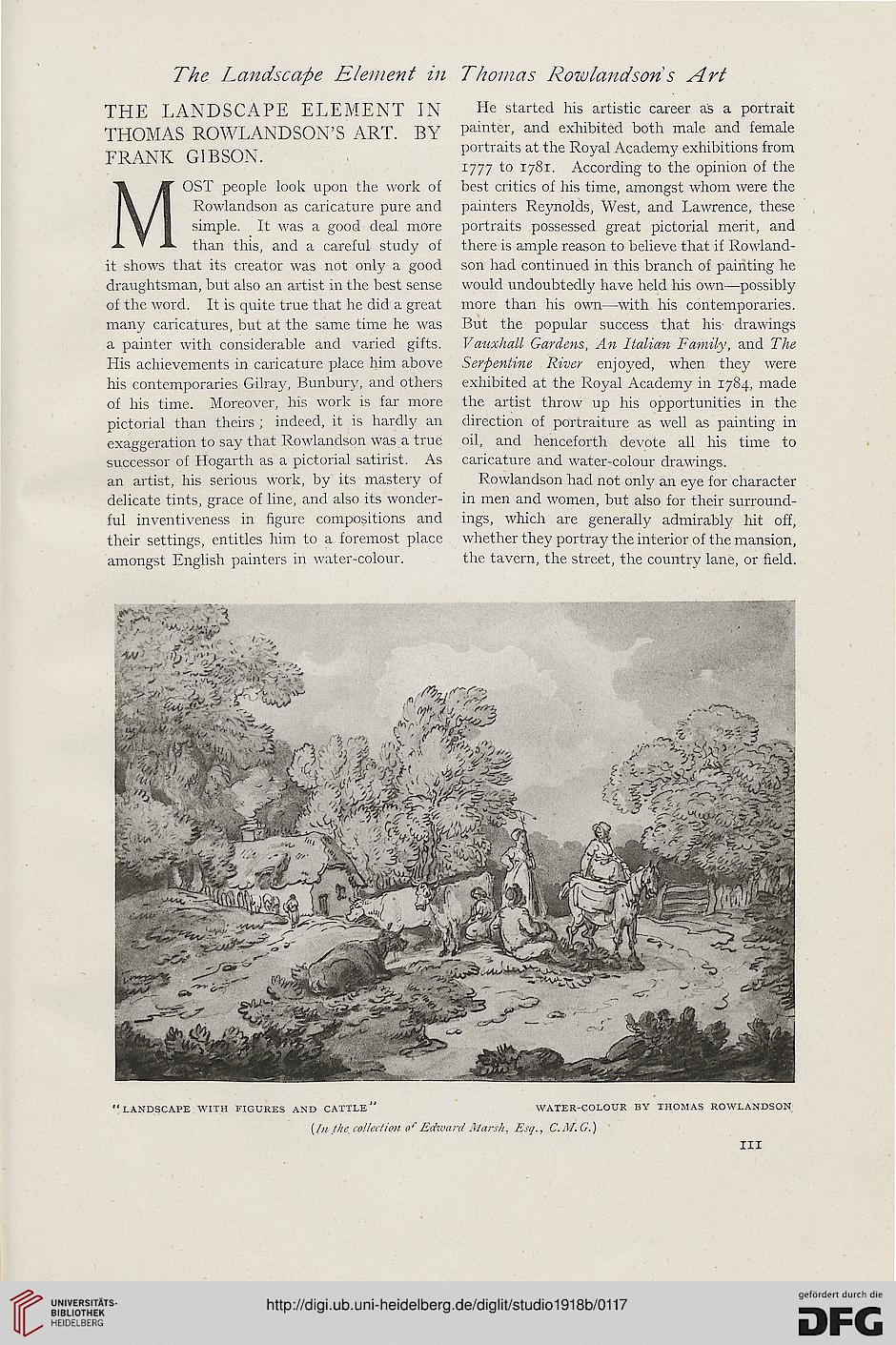 THE LANDSCAPE ELEMENT IN
THOMAS ROWLANDSON'S ART. BY
FRANK GIBSON.

MOST people look upon the work of
Rowlandson as caricature pure and
simple. It was a good deal more
than this, and a careful study of
it shows that its creator was not only a good
draughtsman, but also an artist in the best sense
of the word. It is quite true that he did a great
many caricatures, but at the same time he was
a painter with considerable and varied gifts.
His achievements in caricature place him above
his contemporaries Gilray, Bunbury, and others
of his time. Moreover, his work is far more
pictorial than theirs ; indeed, it is hardly an
exaggeration to say that Rowlandson was a true
successor of Hogarth as a pictorial satirist. As
an artist, his serious work, by its mastery of
delicate tints, grace of line, and also its wonder-
ful inventiveness in figure compositions and
their settings, entitles him to a foremost place
amongst English painters in water-colour.

He started his artistic career as a portrait
painter, and exhibited both male and female
portraits at the Royal Academy exhibitions from
1777 to 1781. According to the opinion of the
best critics of his time, amongst whom were the
painters Reynolds, West, and Lawrence, these
portraits possessed great pictorial merit, and
there is ample reason to believe that if Rowland-
son had continued in this branch of painting he
would undoubtedly have held his own—possibly
more than his own—with his contemporaries.
But the popular success that his drawings
Vauxhall Gardens, An Italian Family, and The
Serpentine River enjoyed, when they were
exhibited at the Royal Academy in 1784, made
the artist throw up his opportunities in the
direction of portraiture as well as painting in
oil, and henceforth devote all his time to
caricature and water-colour drawings.

Rowlandson had not only an eye for character
in men and women, but also for their surround-
ings, which are generally admirably hit off,
whether they portray the interior of the mansion,
the tavern, the street, the country lane, or field.

"LANDSCAPE WITH FIGURES AND CATTLE" WATER-COLOUR BY THOMAS ROWLANDSON