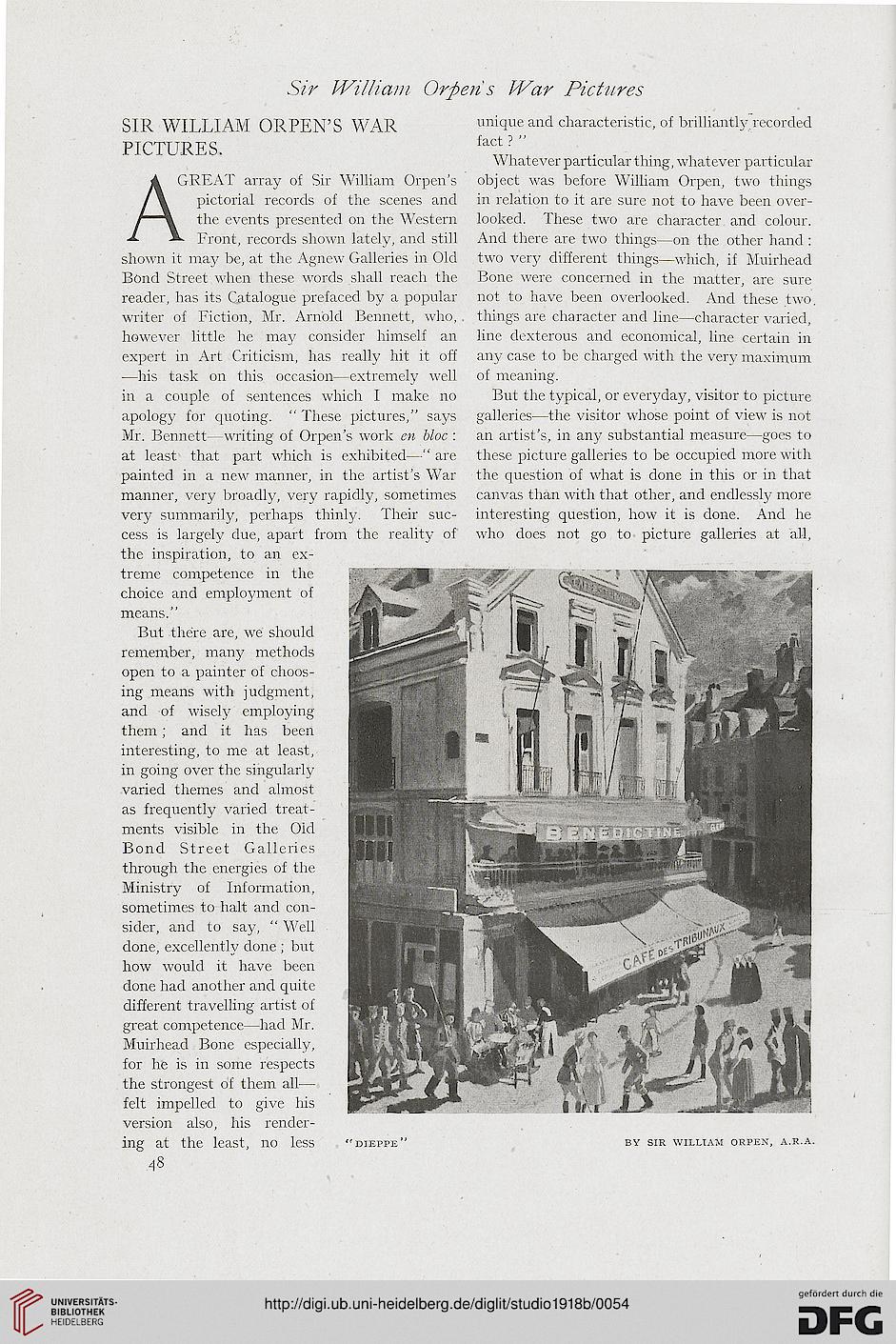 AGREAT array of Sir William Orpen's object was before William Orpen, two things
pictorial records of the scenes and in relation to it are sure not to have been over-
the events presented on the Western looked. These two are character and colour.
k Front, records shown lately, and still And there are two things—on the other hand :
shown it may be, at the Agnew Galleries in Old two very different things—which, if Muirhead
Bond Street when these words shall reach the Bone were concerned in the matter, are sure
reader, has its Catalogue prefaced by a popular not to have been overlooked. And these two.
writer of Fiction, Mr. Arnold Bennett, who, . things are character and line—character varied,
however little he may consider himself an line dexterous and economical, line certain in
expert in Art Criticism, has really hit it off any case to be charged with the very maximum
—his task on this occasion—extremely well of meaning.

in a couple of sentences which I make no But the typical, or everyday, visitor to picture
apology for quoting. " These pictures," says galleries—the visitor whose point of view is not
Mr. Bennett—writing of Orpen's work en bloc : an artist's, in any substantial measure—goes to
at least that part which is exhibited—"are these picture galleries to be occupied more with
painted in a new manner, in the artist's War the question of what is done in this or in that
manner, very broadly, very rapidly, sometimes canvas than with that other, and endlessly more
very summarily, perhaps thinly. Their sue- interesting question, how it is done. And he
cess is largely due, apart from the reality of who does not go to picture galleries at all,
the inspiration, to an ex-
treme competence in the
choice and employment of
means."

But there are, we should
remember, many methods
open to a painter of choos-
ing means with judgment,
and of wisely employing
them; and it has been
interesting, to me at least,
in going over the singularly
varied themes and almost
as frequently varied treat-
ments visible in the Old
Bond Street Galleries
through the energies of the
Ministry of Information,
sometimes to halt and con-
sider, and to say, " Well
done, excellently done ; but
how would it have been
done had another and quite
different travelling artist of
great competence—had Mr.
Muirhead Bone especially,
for he is in some respects
the strongest of them all—
felt impelled to give his
version also, his render-
ing at the least, no less "Dieppe" by sir william orpen, a.r.a.