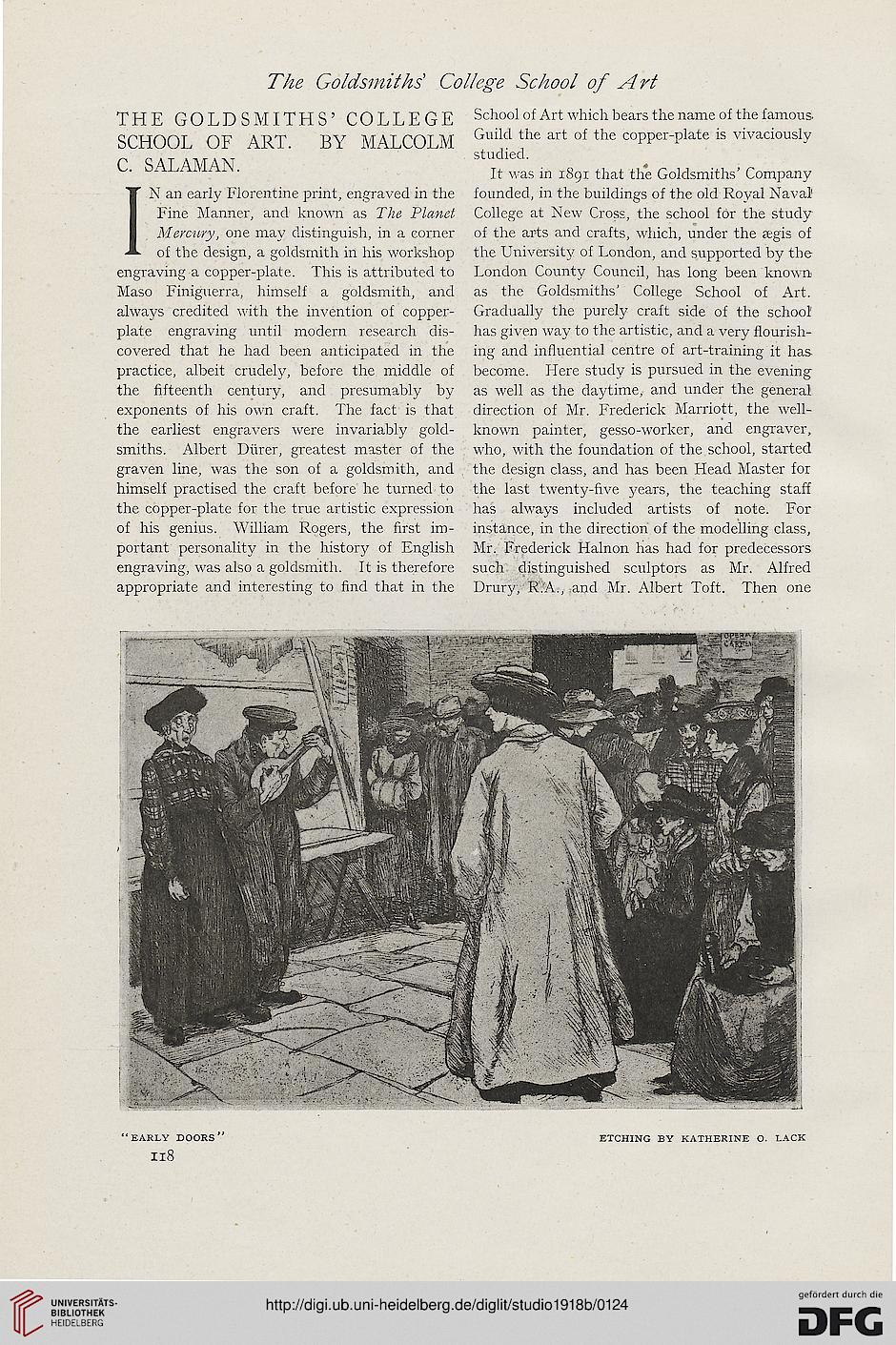 Information about OCR text
The Goldsmiths' College School of Art

School of Art which bears the name of the famous
Guild the art of the copper-plate is vivaciously
studied.

It was in 1891 that the Goldsmiths' Company
founded, in the buildings of the old Royal Naval1
College at New Cross, the school for the study
of the arts and crafts, which, under the aegis of
the University of London, and supported by the
London County Council, has long been known
as the Goldsmiths' College School of Art.
Gradually the purely craft side of the school
has given way to the artistic, and a very flourish-
ing and influential centre of art-training it has.
become. Here study is pursued in the evening
as well as the daytime, and under the general
direction of Mr. Frederick Marriott, the well-
known painter, gesso-worker, and engraver,
who, with the foundation of the school, started
the design class, and has been Head Master for
the last twenty-five years, the teaching staff
has always included artists of note. For
instance, in the direction of the modelling class,
Mr. Frederick Halnon has had for predecessors
such distinguished sculptors as Mr. Alfred
Dnirv, R.A., and Mr. Albert Toft. Then one

THE GOLDSMITHS' COLLEGE
SCHOOL OF ART. BY MALCOLM
C. SALAMAN.

IN an early Florentine print, engraved in the
Fine Manner, and known as The Planet
Mercury, one may distinguish, in a corner
of the design, a goldsmith in his workshop
engraving a copper-plate. This is attributed to
Maso Finiguerra, himself a goldsmith, and
always credited with the invention of copper-
plate engraving until modern research dis-
covered that he had been anticipated in the
practice, albeit crudely, before the middle of
the fifteenth century, and presumably by
exponents of his own craft. The fact is that
the earliest engravers were invariably gold-
smiths. Albert Diirer, greatest master of the
graven line, was the son of a goldsmith, and
himself practised the craft before he turned to
the copper-plate for the true artistic expression
of his genius. William Rogers, the first im-
portant personality in the history of English
engraving, was also a goldsmith. It is therefore
appropriate and interesting to find that in the