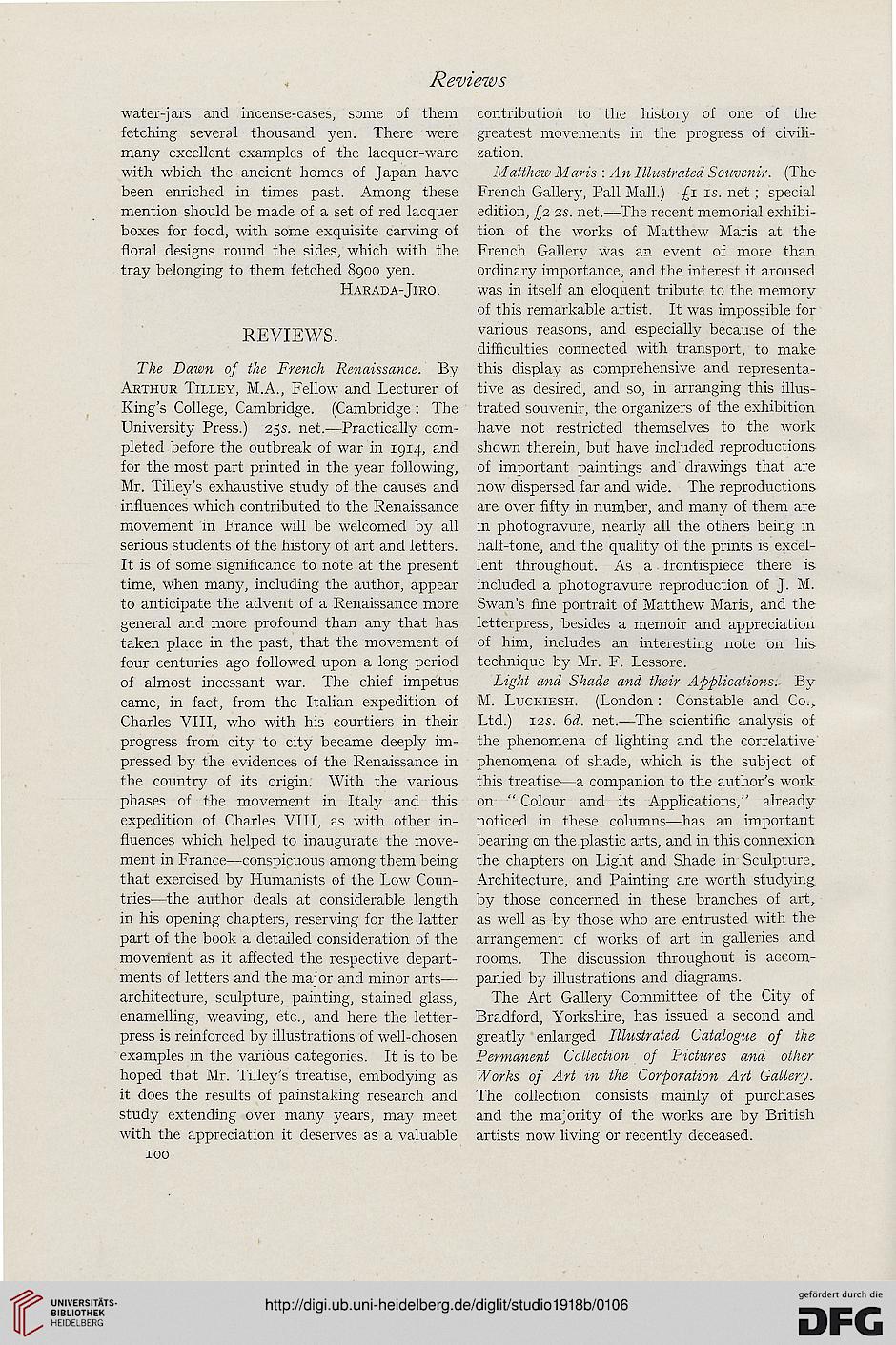 water-jars and incense-cases, some of them
fetching several thousand yen. There were
many excellent examples of the lacquer-ware
with which the ancient homes of Japan have
been enriched in times past. Among these
mention should be made of a set of red lacquer
boxes for food, with some exquisite carving of
floral designs round the sides, which with the
tray belonging to them fetched 8900 yen.

The Dawn of the French Renaissance. By
Arthur Tilley, M.A., Fellow and Lecturer of
King's College, Cambridge. (Cambridge : The
University Press.) 25s. net.—Practically com-
pleted before the outbreak of war in 1914, and
for the most part printed in the year following,
Mr. Tilley's exhaustive study of the causes and
influences which contributed to the Renaissance
movement in France will be welcomed by all
serious students of the history of art and letters.
It is of some significance to note at the present
time, when many, including the author, appear
to anticipate the advent of a Renaissance more
general and more profound than any that has
taken place in the past, that the movement of
four centuries ago followed upon a long period
of almost incessant war. The chief impetus
came, in fact, from the Italian expedition of
Charles VIII, who with his courtiers in their
progress from city to city became deeply im-
pressed by the evidences of the Renaissance in
the country of its origin. With the various
phases of the movement in Italy and this
expedition of Charles VIII, as with other in-
fluences which helped to inaugurate the move-
ment in France—conspicuous among them being
that exercised by Humanists of the Low Coun-
tries—the author deals at considerable length
in his opening chapters, reserving for the latter
part of the book a detailed consideration of the
movement as it affected the respective depart-
ments of letters and the major and minor arts—
architecture, sculpture, painting, stained glass,
enamelling, weaving, etc., and here the letter-
press is reinforced by illustrations of well-chosen
examples in the various categories. It is to be
hoped that Mr. Tilley's treatise, embodying as
it does the results of painstaking research and
study extending over many years, may meet
with the appreciation it deserves as a valuable
100

contribution to the history of one of the
greatest movements in the progress of civili-
zation.

Matthew Maris : An Illustrated Souvenir. (The
French Gallery, Pall Mall.) £1 is. net : special
edition, £2 zs. net.—The recent memorial exhibi-
tion of the works of Matthew Maris at the
French Gallery was an event of more than
ordinary importance, and the interest it aroused
was in itself an eloquent tribute to the memory
of this remarkable artist. It was impossible for
various reasons, and especially because of the
difficulties connected with transport, to make
this display as comprehensive and representa-
tive as desired, and so, in arranging this illus-
trated souvenir, the organizers of the exhibition
have not restricted themselves to the work
shown therein, but have included reproductions
of important paintings and drawings that are
now dispersed far and wide. The reproductions
are over fifty in number, and many of them are
in photogravure, nearly all the others being in
half-tone, and the quality of the prints is excel-
lent throughout. As a frontispiece there is
included a photogravure reproduction of J. M.
Swan's fine portrait of Matthew Maris, and the
letterpress, besides a memoir and appreciation
of him, includes an interesting note on his
technique by Mr. F. Lessore.

Light and Shade and their Applications.. By
M. Luckiesh. (London: Constable and Co.,
Ltd.) 12s. 6d. net.—The scientific analysis of
the phenomena of lighting and the correlative'
phenomena of shade, which is the subject of
this treatise—a companion to the author's work
on " Colour and its Applications," already
noticed in these columns—has an important
bearing on the plastic arts, and in this connexion
the chapters on Light and Shade in Sculpture,
Architecture, and Painting are worth studying
by those concerned in these branches of art,
as well as by those who are entrusted with the
arrangement of works of art in galleries and
rooms. The discussion throughout is accom-
panied by illustrations and diagrams.

The Art Gallery Committee of the City of
Bradford, Yorkshire, has issued a second and
greatly enlarged Illustrated Catalogue of the
Permanent Collection of Pictures and other
Works of Art in the Corporation Art Gallery.
The collection consists mainly of purchases
and the majority of the works are by British
artists now living or recently deceased.