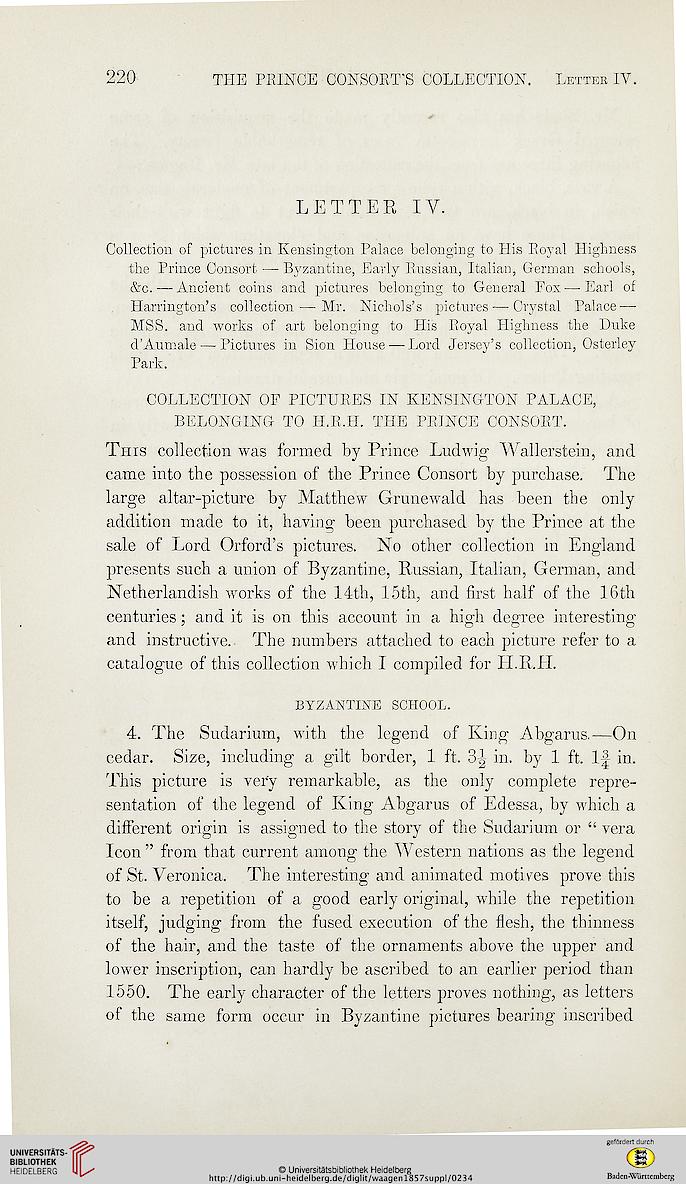 COLLECTION OF PICTURES IN KENSINGTON PALACE,
BELONGING TO H.R.H. THE PRINCE CONSORT.

This collection was formed by Prince Ludwig Wallerstein, and
came into the possession of the Prince Consort by purchase. The
large altar-picture by Matthew Grunewald has been the only
addition made to it, having been purchased by the Prince at the
sale of Lord Orford's pictures. No other collection in England
presents such a union of Byzantine, Russian, Italian, German, and
Netherlandish works of the 14th, 15th, and first half of the 16th
centuries; and it is on this account in a high degree interesting
and instructive. The numbers attached to each picture refer to a
catalogue of this collection which I compiled for H.R.H.

4. The Sudarium, with the legend of King Abgarus.—On
cedar. Size, including a gilt border, 1 ft. 3^ in. by 1 ft. If in.
This picture is very remarkable, as the only complete repre-
sentation of the legend of King Abgarus of Edessa, by which a
different origin is assigned to the story of the Sudarium or " vera
Icon " from that current among the Western nations as the legend
of St. Veronica. The interesting and animated motives prove this
to be a repetition of a good early original, while the repetition
itself, judging from the fused execution of the flesh, the thinness
of the hair, and the taste of the ornaments above the upper and
lower inscription, can hardly be ascribed to an earlier period than
1550. The early character of the letters proves nothing, as letters
of the same form occur in Byzantine pictures bearing inscribed