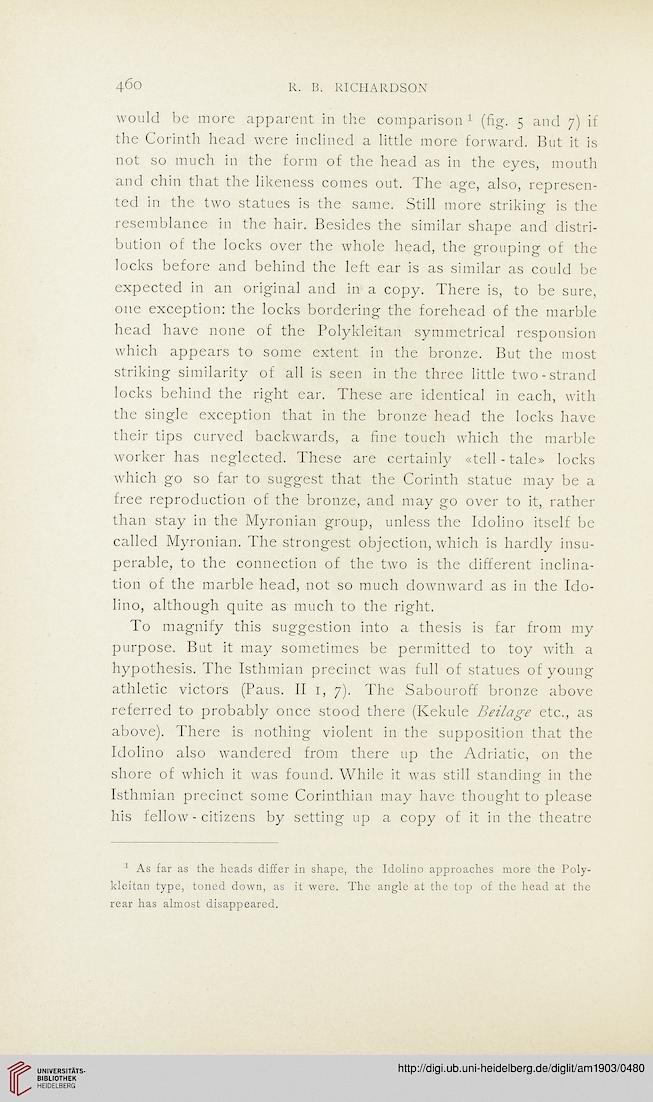 would be more apparent in the comparison 1 (fig. 5 and 7) if
the Corinth head were inclined a little more fonvard. But it is
not so much in the form of the head as in the eyes, mouth
and chin that the likeness comes out. The age, also, represen-
ted in the two statues is the same. Still more striking is the
reserablance in the hair. Besides the similar shape and distri-
bution of the locks over the whole head, the grouping of the
locks before and behind the left ear is as similar as could be
expected in an original and in a copy. There is, to be sure,
one exception: the locks bordering the forehead of the marble
head have none of the Polykleitan symmetrical responsion
which appears to some extent in the bronze. But the most
striking similarity of all is seen in the three little two-Strand
locks behind the right ear. These are iclentical in each, with
the single exception that in the bronze head the locks have
their tips curved backwarcls, a fine touch which the marble
worker has neglected. These are certainly «teil - tale» locks
which go so far to suggest that the Corinth statue may be a
free reproduction of the bronze, and may go over to it, rather
than stay in the Myronian group, unless the Idolino itself be
called Myronian. The strongest objection, which is harclly insu-
perable, to the connection of the two is the different inclina-
tion of the marble head, not so much downward as in the Ido-
lino, although quite as much to the right.
To magnify this Suggestion into a thesis is far from my
purpose. But it may sometimes be permitted to toy with a
hypothesis. The Isthmian precinct was full of statues of young
athletic Victors (Paus. II 1, 7). The Sabouroff bronze above
referred to probably once stood there (Kekule Beilage etc., as
above). There is nothing violent in the supposition that the
Idolino also wanclered from there up the Adriatic, on the
shore of which it was found. While it was still Standing in the
Isthmian precinct some Corinthian may have thought to please
his fellow - citizens by setting up a copy of it in the theatre

1 As far as the heads differ in shape, the Idolino approaches more the Poly-
kleitan type, toned down, as it were. The angle at the top of the head at the
rear has almost disappeared.