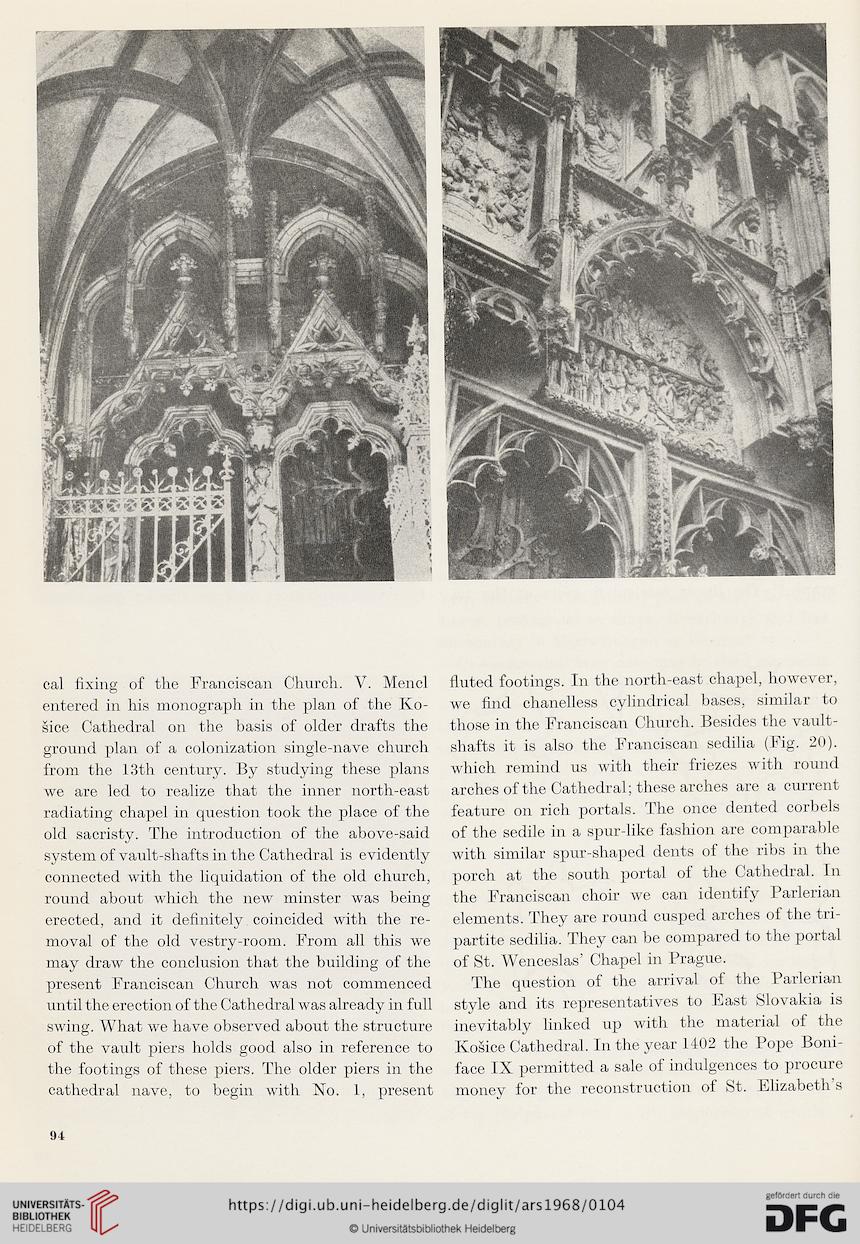 
cal fixing of the Franciscan Church. V. Mencl
entered in his monograph in the plan of the Ko-
šice Cathédral on the basis of older drafts the
ground plan of a colonization single-nave church
frorn the 13th Century. By studying these plans
we are led to realize that the inner north-east
radiating chapel in question took the place of the
old sacristy. The introduction of the above-said
systém of vault-shafts in the Cathédral is evidently
connected with the liquidation of the old church,
round about which the new minster was being
erected, and it definitely coincided with the re-
moval of the old vestry-room. From ail this we
may draw the conclusion that the building of the
present Franciscan Church was not commenced
until the érection of the Cathédral was already in füll
swing. What we hâve observed about the structure
of the vault piers holds good also in reference to
the footings of these piers. The older piers in the
cathédral navě, to begin with No. 1, present

fluted footings. In the north-east chapel, however,
we find chanelless cylindrical bases, similar to
those in the Franciscan Church. Besides the vault-
shafts it is also the Franciscan sedilia (Fig. 20).
which remind us with their friezes with round
arches of the Cathédral; these arches are a current
feature on rich portais. The once dented corbels
of the sedile in a spur-like fashion are comparable
with similar spur-shaped dents of the ribs in the
porch at the south portai of the Cathédral. In
the Franciscan choir we can identify Parlerian
éléments. They are round cusped arches of the tri-
partite sedilia. They can be compared to the portai
of St. Wenceslas’ Chapel in Prague.
The question of the arrivai of the Parlerian
style and its représentatives to Fast Slovakia is
inevitably linked up with the material of the
Košice Cathédral. Intheyear 1402 the Pope Boni-
face IX permitted a sale of indulgences to procure
money for the reconstruction of St. Elizabeth’s